Woke up early to catch the ferry back to Whittier. We’re taking a longer ride today (6 ½ hours); we’re on the same boat – a catamaran called the Chenga — but this itinerary has a stop in Valdez. We took a quick walk into town to have lunch (we’re calling this the port of call on our mini-cruise ship). Valdez is a wealthy oil town, but you wouldn’t know it. The town looks like something out of the semi-old west: wide roads and wider parking lots, with unattractive squat buildings spaced pretty far apart. We had great fried halibut (my new favorite fish) at the Alaska Halibut House.

The ferry ride from Valdez to Whittier is pretty spectacular; in addition to endless views and sea otter and sea lion sightings, we went through an ice field. The ice breaks off from Columbia Glacier and makes the ocean look like the Arctic.

We spent an hour in Whittier (where there’s almost nothing to do – only 180 people live there, almost all of them in the same building) waiting for the tunnel to open. We drove to Girdwood, found Glacier View B&B, and had dinner at Maxine’s Bistro. A terrific meal: ahi tuna in watermelon; soy-marinated black bean wontons with salsa; and udon soup. Haven’t spent much time in Girdwood yet, but it looks nice – it’s tucked in the mountains, and with a clear view, you can see seven glaciers up in the hills. It’s known as a liberal, hippie-ish town. One man we met in Cordova said disparagingly of Girdwood, “if you like Berkeley, you’ll like Girdwood.” That was shortly before he asked us, “what are they telling you about ANWAR?” (When Prescott asked, “who?”, he responded, “the news media.” It was just like we were living on FOX news.) 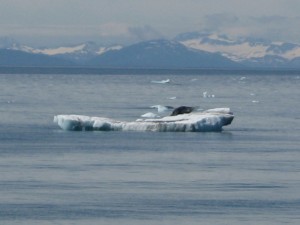 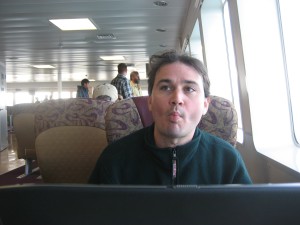 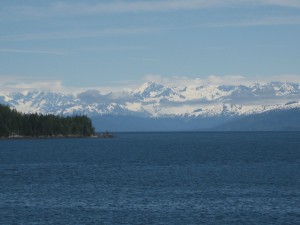 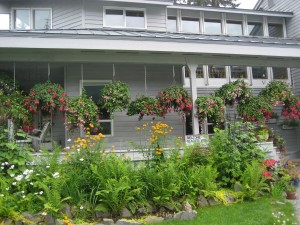