Arrived at the Athens airport after a long (11 hours) but uneventful flight.  We didn’t know that they still served bad airplane food for free on international flights (a perk I’d happily trade in for free wifi or more legroom), so we had the foresight to bring our own bread, cheese, and potato-tomato salad for the way over.  That, plus “The Best Exotic Marigold Hotel,” made the trip more than bearable.

Once in Athens, we took the metro into the city, then walked the few blocks to our hotel (the Magna Grecia Boutique Hotel).  It’s an interesting place — a beautiful old building with a stunning view of the Acropolis and one of the oddest senses of interior decorating I’ve ever seen.  Our room has a red and orange chandelier; our blowsy red curtains are held by broad red bands of red sequins.  It’s like Rococco meets Ikea meets Rocky Horror.  But the view up the hill — as I type, I can see the Parthenon lit up by lights under a half-moon — is so spectacular that the room is worth every extraneous swath of red fabric.

Our hotel room wasn’t ready when we checked in, so we had an early lunch at a mediocre restaurant up the street.  Then we walked to the New Acropolis Museum, where they have a vast collection of Athenian pottery, caryatids, friezes, and marbles of all other sorts.  It’s a great museum, with giant glass windows that give you a great view up the other side of the Acropolis.  Unfortunately, I’m not sure either of us was quite in the mood for museum-going (a combination of heat, dehydration, jet lag, and not enough sleep on the plane doesn’t put one in the best spirits for ruin-viewing.  So we walked back to our hotel for a long nap.

Took a stroll in the streets near our hotel when we woke up.  Most things here are closed on Saturday evenings, so there wasn’t much to see in the way of shops — until we hit the Plaka, land of a thousand tourist traps all wedged into tiny, winding, pedestrian streets.  We ended up having dinner on the outskirts of the Plaka (that you, Matt Barrett’s Athens blog!).  The food at Paradosiako was amazing: Greek salad (why doesn’t mine taste quite this good?); fava (thank you, Liz Hirsch, for the recommendation); fried cheese (like grilled cheese without the bread; and fried cod fish with powerful garlic sauce.  Everything was wonderful.  They brought out the best honeydew melon I’ve ever had for dessert.  We also tried our first glass of ouzo — and it may be the last ouzo we have on the trip.

Now we’re back in the hotel room watching fencing.  It’s the only Olympic sport we can find, and we’re realizing that we know nothing about the rules of the sport, since they never show it on US tv.  But they seem to have moved on to swimming, so we’re in more comfortable territory.  We’re going to try to get an early bedtime so we can beat the heat with an early wake-up tomorrow.  But it’s hard to turn off the light when you have this view. 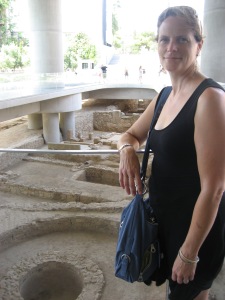 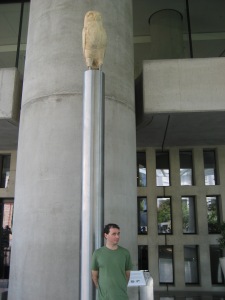