We had big plans for the morning that involved waking up early, going snorkeling, T getting a massage while everyone else got coffee, doing more snorkeling … but none of that happened, because when we tried to start the car, it responded with a “click-click” noise.  A “click-click,” when unaccompanied by any other sounds, is not a good car noise.  In this case, it meant the car wouldn’t start, so our excursion planning all evaporated in multiple rounds of calls to Hertz (both national and local — national puts you on hold and transfers you hither and yon; local has all of their managers in a morning meeting), unsuccessful jump starts, and re-planning. 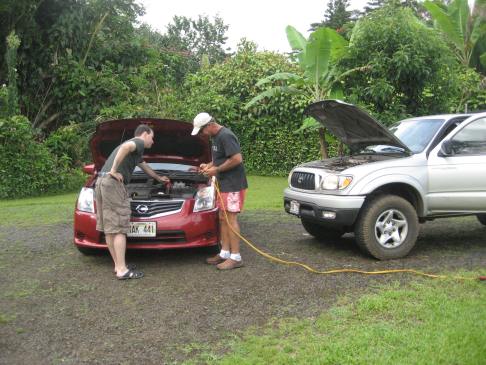 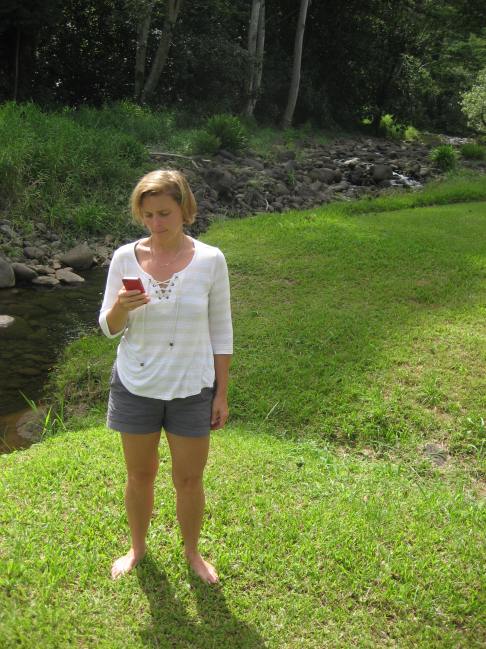 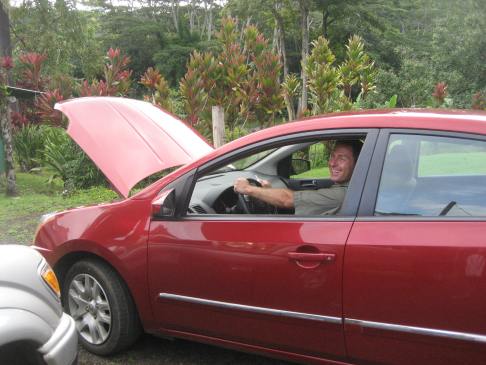 We ended up spending the morning chez Taro Patch Hale.  J & Dusty rested; T and Pres went on a run down the road to the taro patches.  T then went swimming in the stream that runs by our cottages — it has a lovely swimming hole in which you can actually do tiny laps! 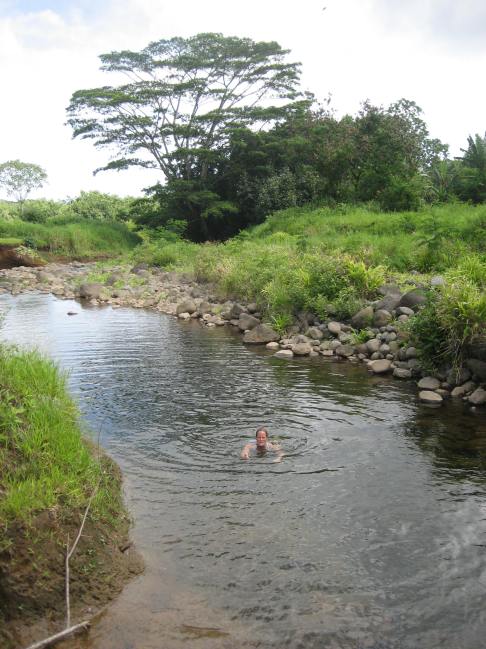 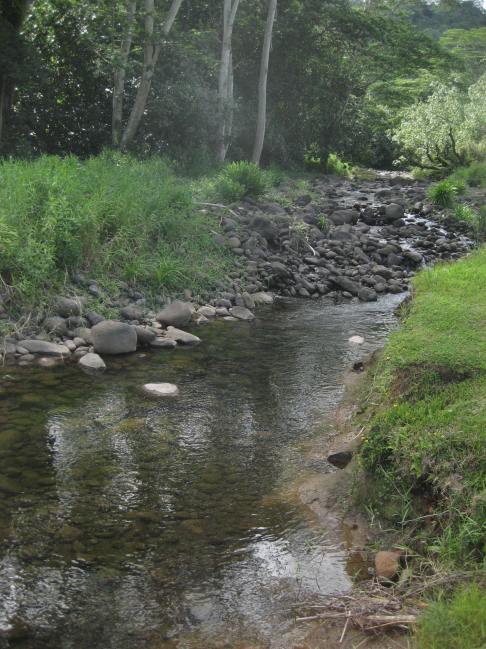 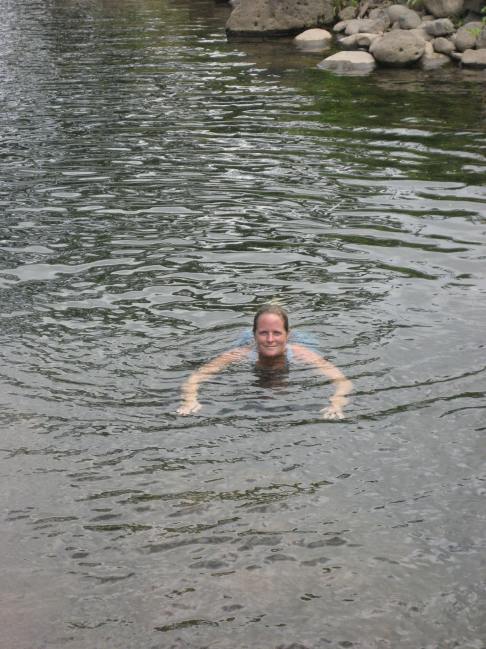 We were finally rescued by a very nice two truck driver (from Kinda Quick Towing) a couple of hours later — he managed start our unstartable car (still mystified as to why he could and we couldn’t) and then gave us an entirely new car.  This was a thrilling trade, because the old car, with its wobbly suspension and lousy pickup, wasn’t making us very happy in the first place. 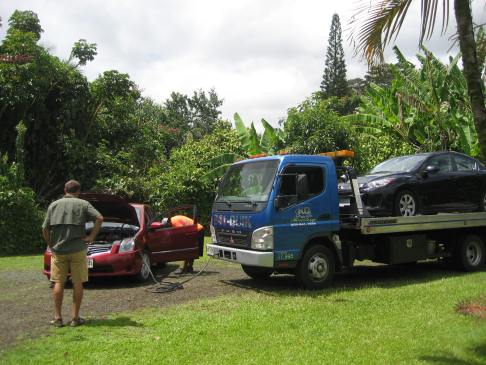 All of this excitement was followed by the Great Mango Party: the peeling (and subsequent happy eating) of about fifteen mangoes, most of which we’d picked by the side of the road earlier in the week. 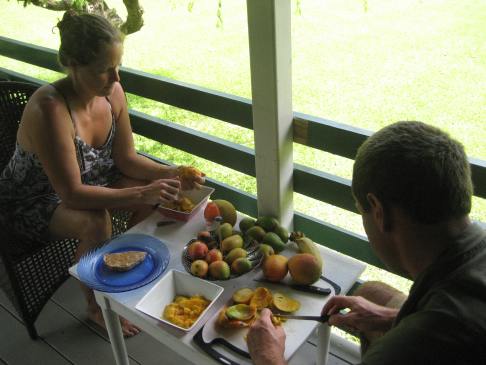 We finally left the house shortly before lunchtime, heading for fish tacos at the Kilauea Fish Market.  We had enormous tacos and wraps, which felt unusually good for us (Kauai seems to be hiding most of its healthy food in Kilauea).  T also ran over to the post office, which has a space outside that seems to be reserved for those who participate in “Bring Your Lawn Ornament to Work Day”: 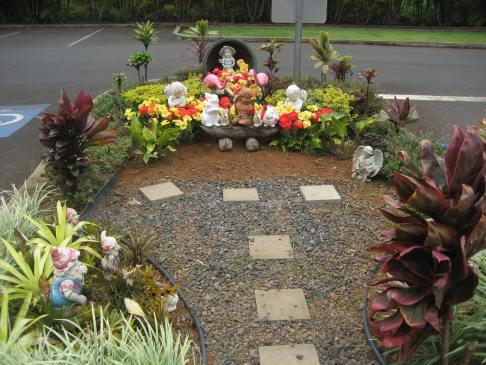 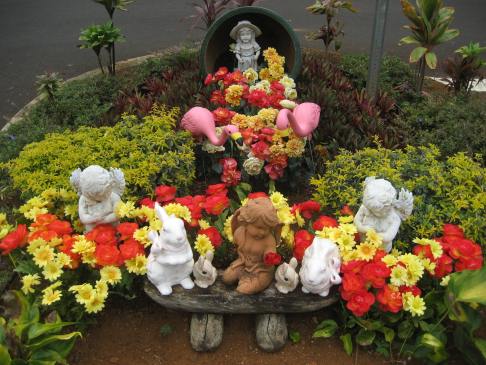 Our day’s journey next took us to Secret Beach, where we noticed this sign: 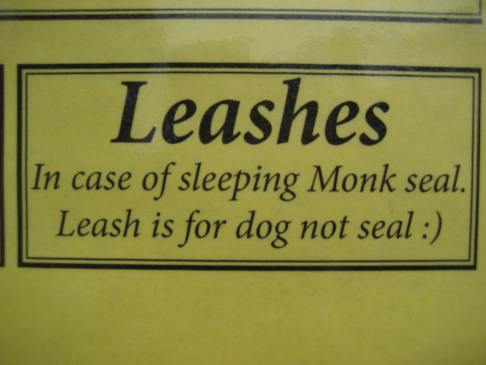 We played in the waves at Secret Beach for a while. and caught a few good ones  But the waves weren’t nearly as frequent as yesterday’s, so we moved on to Pu’u Poa Beach at the Princeville Hotel (with a stop to have extruded frozen pineapple at Banana Joe’s, of course — no day here seems complete without something frozen and sweet).

Pu’u Poa Beach is an interesting place:  it’s at the very ritzy St. Regis Hotel, and it’s pretty clear that the hotel doesn’t want the hoi polloi hanging out there.  But the State requires that the hotel give public beach access.  So the hotel has grudgingly given up nine parking spaces (we got one!) and a long, ugly path behind the hotel for the riff-raff to use.  The beach makes all of this silliness worth it; there’s a great view all the way around Hanalei Bay, soft sand, and good snorkeling (once you figure out that you stick to swimming in the many tunnels that cut through the very shallow reef).  Not a great reef at all, but lots of fish and one giant sea turtle. 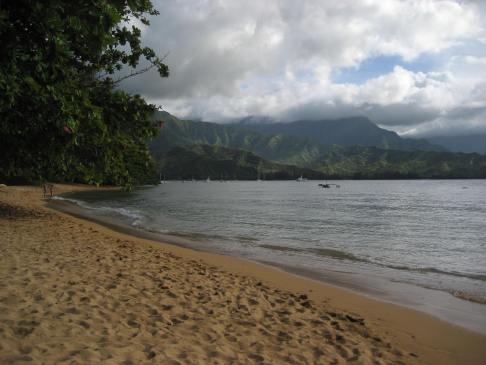 After snorkeling, T discovered that the hoi polloi can use the hot tub and pool if, as our mom taught us, you just go ahead and walk in.  That was really nice.  Then we got deck chairs on the beach (also only for hotel guests, but apparently they’ll let you sit there — after a brief lecture — if they’ve already taken your order for overpriced drinks).  Watched the sun set over the waves as lots of people took photographs (or had their photographs taken by professionals — it’s that kind of a hotel). 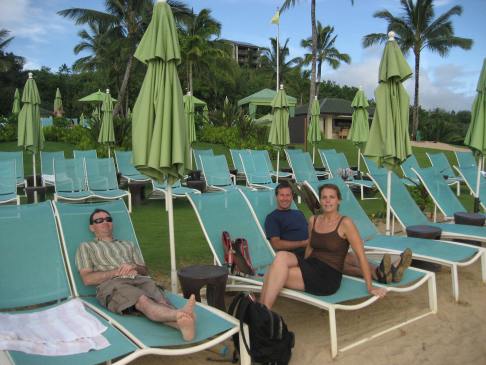 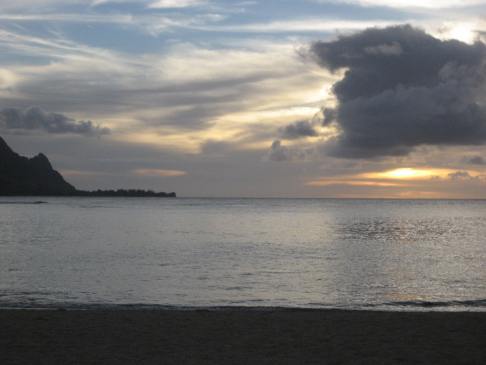 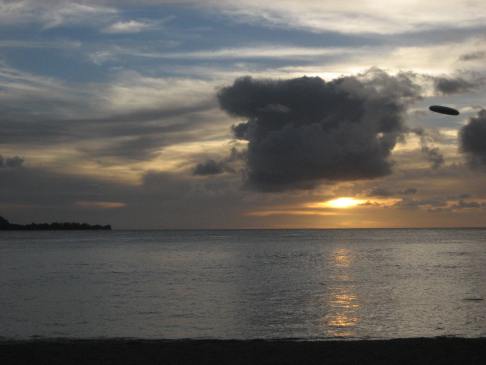 Note the UFO in the photo above.

Left the beach for dinner at Hanalei Pizza, where we got a veggie deluxe.  Turns out that a pizza with a hippie crust (it included coconut water and chia seeds) and everything in the world on top can be surprisingly tasty.

Our first time driving home at night, which required J to play don’t-hit-the-toad-in-the-road.  It was a really hard game (I won’t report her score).  Let’s just say that toads seem to outnumber egrets here, and that’s saying a lot.  Early bedtime all-round.

One response to “July 26: Click-Click Day”