Truth be told, we haven’t done a lick to prepare for Flossie.  The first reports said Kauai wouldn’t be in its path.  Now the reports have Flossie smacking straight into our island sometime in the early morning, but only after Maui has done us the courtesy of taking most of the wind out of it (literally).  And it’s already been downgraded to a tropical depression, which is hard to take seriously.  So we’re thinking of closing our windows tonight – that’s it for the prep work.  Mostly we check the news a lot and complain about the heat; humidity seems to have settled over the island, and we’re waiting for Flossie to blow it away.

Our day started with frustration on several fronts.  First of all, Prescott’s fight home was canceled (thanks, Flossie), so he spent a while on the phone dealing with rescheduling.  Then we discovered that the best breakfast place in Kauai is closed on Mondays, so we went to the Ono Family Restaurant instead.  We had pancakes and French toast, but they weren’t really ono at all (“ono” means delicious).  Then we went to a hiking trail, put on sun block, and had it start pouring rain within about three minutes of hitting the trail.  We turned around and ran back up to our dry car.  Not an auspicious beginning.

After some debate, we decided to be intrepid and try the hike anyway (after all, the hike was going to take us a short ways to a waterfall, so we were planning to be wet soon in any case).  The rain stopped pretty much as soon as we started hiking again. 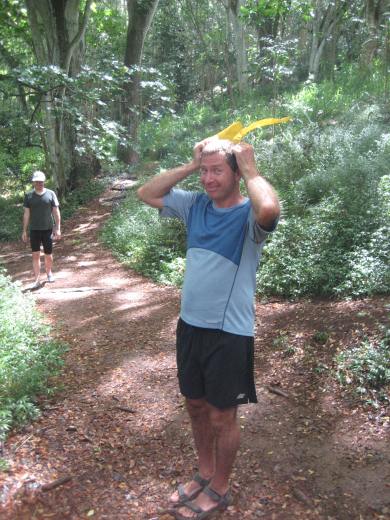 The easy, short trail ended at Ho’opi’i Falls, which was simply amazing.  It’s a relatively small waterfall (maybe 25 feet tall, as opposed to yesterday’s 173 foot Wailua Falls).  But it packs a lot of punch, as two waterfalls rush into a little pool and a long channel with a serious current.  We frolicked in the falls for a long time and struggled to find a way behind them.  The only injury was Prescott’s leg (he slipped while heroically trying to take a picture of us).  Otherwise, we thought this might be the best waterfall yet of the trip. 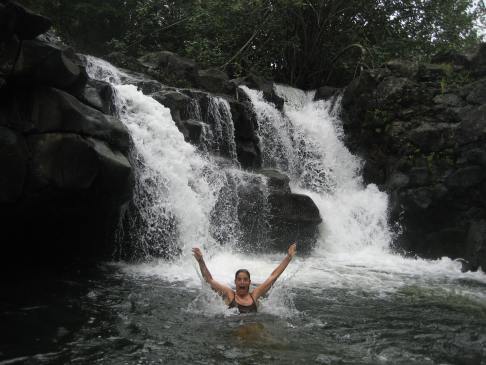 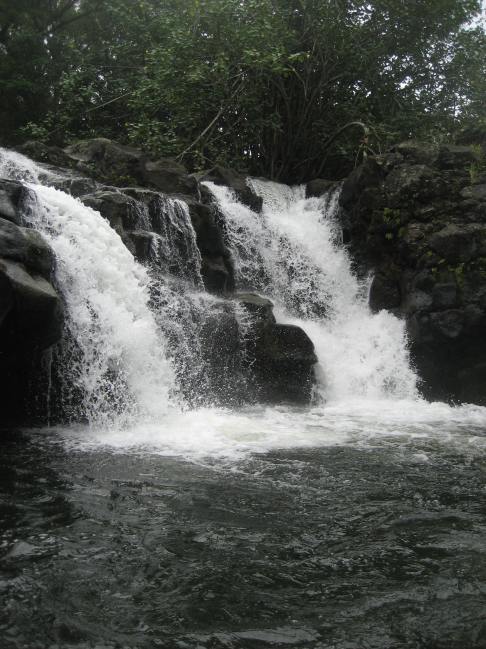 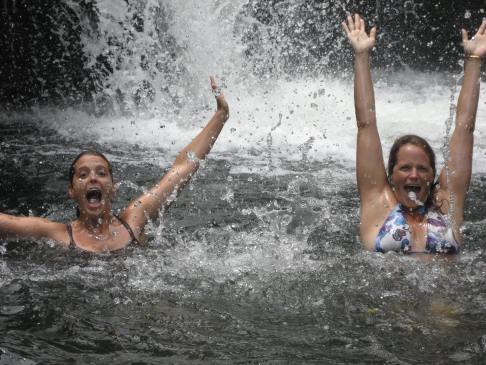 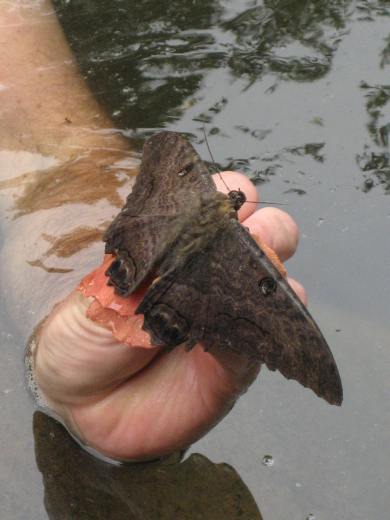 And Dusty saved a sad moth from drowning.

Hiked back to our car in the rain; ended up happy but bedraggled.  Returned to Pau Hana for fish & chips (in Jossie’s words, “some of us had friend food for lunch, while the more angelic of us had healthy smoothies with lots of antioxidants”).  T had mint oreo ice cream at Tropical Dreams, which was well-shared by J and Pres (the owner decided they should each have a small spoon).  Yum.

Went home for a brief snooze before launching out in search of more food at the Lihue farmers market (we hit pretty much every farmers market we can find).  On our way there, we stopped at a heiau — this one was once used for human sacrifices — called Holoholoku (we also learned that one of the last queens, who’d converted to Christianity, had it converted to a pig pen.  I’m sure there’s a good story somewhere there.) 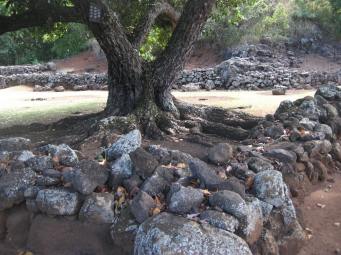 Then we walked a few dozen feet to the Birthstone, where every king of Kauai had to be born. Looked like an incredibly uncomfortable place to have a baby.

The prospective mom also had to stay in a tiny hut next to the Birthstone through the final part of her term, but we agreed that it looked like a pregnant woman could barely lie down inside.  Side note:  see that sandstone slab in front?  Our guidebook says that a dog lies sacrificed beneath it, to indicate to commoners that it was a kapu place (“kapu” means “forbidden” or “taboo”).  We have no idea how a commoner was supposed to know that a dog’s remains lay underneath; we feel like we’re probably missing something here.

Had a good time at the market looking at the produce, though Dusty and T only have eyes for the fruit and tend to forget that we’re supposed to be shopping for dinner supplies (as a result, our mango, papaya, and pineapple stash is significant).  Thankfully, Pres and J snuck in some green veggies for our dinner. 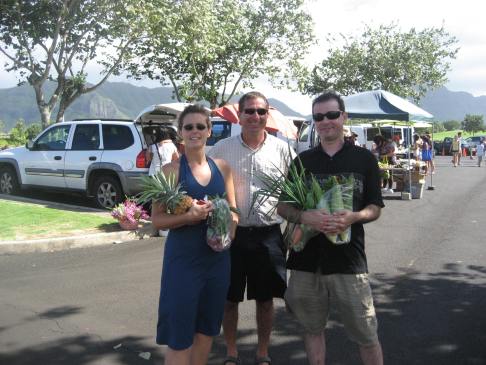 And here’s some taro, which we didn’t buy, but I thought was cool in its out-of-the-water form:

Took a trip over to Kilohana, an old plantation house that’s now home to Gaylord’s restaurant and several shops.

Our purpose there was to do some rum tasting at Koloa Rum, which is distilled here on the island (they’re the only people who still grow sugar cane here — the last sugar plantation closed in 2010).

They make great rum (though T discovered that she can’t stand straight rum); the spiced & coconut rums were our favorites.  T does, however, like the furnishings in old houses (and wonders why we don’t own a blue divan).

Returned home.  T took at dip in the tiny pool; J went running; Dusty got smart by reading “The Economist;” Pres made a terrific dinner (with some sous chef and scullery maid assistance) of tofu-veggie curry and corn salad.

The seven-year-old daughter of our hostess came knocking on our door in the middle of dinner to warn us that Flossie is coming (this was made especially endearing by her little German accent).  She instructed us to close all of our windows (but said, “if they won’t close, well,” and shrugged her shoulders).  Now we’ve moved on to making rum drinks with our new coconut rum purchase.

Editor’s late-night note:  the evening ended with a rousing game of Oh Hell!  We went all the way up to 13 and back, and laughed so hard that we cried (well, T did, at least).  And it now looks like Flossie is a flop — Kauai may get a bunch of rain, but we’re not going to see any big winds.  So if you’ve been watching the Weather Channel with any anxiety (Fred, that’s you), know that we’re all going to be fine!