Well, we finally made it to the Santorini airport in Fira at 4:35 this morning.  This is how we both felt by the time we finally arrived:

Our introduction to Greece came in the form of a death-defying taxi ride (there’s no better kind in Greece) to the Argonaftes Villa in the village of Firostefani.  One of the hotel managers wake up to meet us there (at about 5:15), and he showed us to our perfectly serviceable room.  We didn’t have much of a view (though we could see out across a barren landscape to the hazy sea), but we were able to see the moon setting as Venus rose right above it, and the colors of sunrise were just beginning — that was stunning.

It took a little while to settle in — our air conditioner sounded a lot like a weed wacker — but we finally got some rest.  We woke up fairly close to check-out time and went on our way.  Here’s our hotel — and some outsider art (which was everywhere, from rooms to outside passageways to every wall of the reception area) painted by the patrician of the family that owns the place.

Took the bus up around the island, which was a great experience — it was a regular local bus, but it felt like we were taking a charter tour bus.  The views were great for getting a sense of the island, which is one giant volcanic hill jutting up high out of the earth, with very little in the way of vegetation.  But it’s incredibly popular, both with tourists and with locals, so it’s dotted with houses all over the place.

I wouldn’t say that we saw anything truly spectacular about Santorini until we arrived at the village of Oia, where we’re staying.  Once you get off the bus and walk over the bumpy streets (which are about as wide as four people standing shoulder-to-shoulder and have no cars but are filled with tourists), you get a view of the lime-washed buildings and the sea-blue caldera, and your jaw drops.  Your mouth stays open for a while, and you wonder if you’ve ever seen a place so beautiful in all the world.

We made our way to the initially disappointing-looking Best Western Museum Hotel.  Anything with the words “Best Western” make me nervous, and a quick glance around the rooms didn’t suggest that we would get the views of the sea that we’d been promised.  But then we were led to the pool, which was a promising start …

…and then across the street, down an alley, down some stairs, and up some stairs to our room.  And then our jaws dropped again.  This is the view from our room!!!!!!!!!!!! 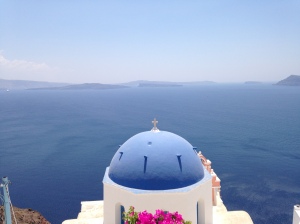 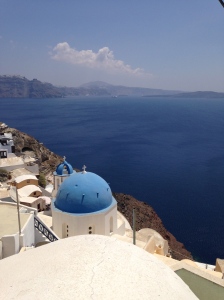 I’m sure I’m not allowed to use that many exclamation points in a lifetime, but this seems like the right time to break that particular rule.  We plan to take about a thousand pictures of these blue domes.  So far, we’re well on our way.  The views never stop, even if we just glance out of our front door.  We’re staying in a traditional Oia cave-style room, which people have been building in the hillsides for centuries as a way to beat the heat.  Here’s our amazing room,

and here are the stairs to our little cave (we’re the blue door at the top left),

and here’s the little skylight window in our bathroom: 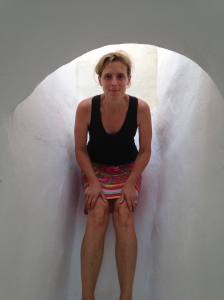 Then we really started taking pictures in earnest, and we’ve barely stopped. 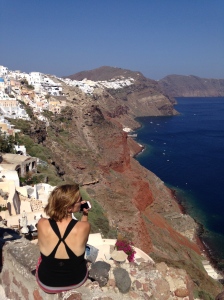 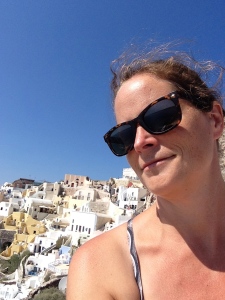 Our breaks so far have been for (1) lunch at Skala, a fine restaurant and views of the caldera, (2) a little shopping (though most of the shops are incredibly touristy and all seem to sell the same things), and (3) a little swimming.  At lunch, we had our first tastes of the fried tomato patties for which Santorini is knows — yum — a mixed salad, and bread with some kind of a great mint-yoghurt dip.  And a parade of donkeys walked by the restaurant while we were eating — going somewhere to transport tourists up and down this endless mountain (note that “mountain” is a stretch — the highest point here is 1854 feet). 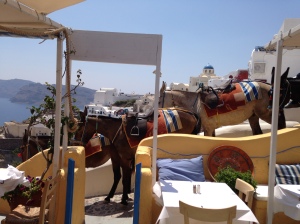 We also found a fantastic bookstore, Atlantis Books, in our wanderings — they sell books in English, Greek, French, and Dutch (among others), new and old, used and antique.  Very cool place. 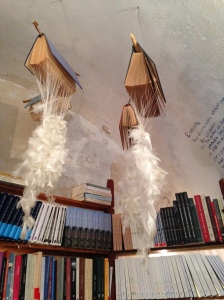 Now we’re relaxing by the pool waiting for sunset, which is when we’ve been told that everyone scurries out to snap pictures of the the views again.

J and I are guessing that Santorini would be a little (or a lot) too hot, a little too crowded, and  a little too touristy for some of our family members, but for two days, it looks pretty good to us.  That said, you should see the crowds that come out to take pictures at sunset!  They line the walls — it’s almost impossible to get a good place if you’re not out early enough — and the streets are mobbed (if you look carefully, you’ll see that there are people on every single useful viewing surface).

We practiced our amateur photography skills while we waited. 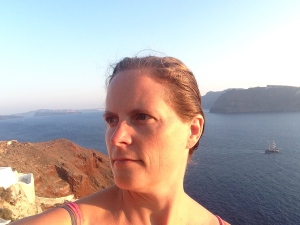 But there is a lovely sunset (though it’s really hard to capture with the quality of our equipment):

Just after the sun went down (and we clapped), we went to dinner at Ochre, a wine bistro with great views of the post-sunset sky colors.  The stuffed tomatoes, peppers, and squash were delicious.  And they produce wine on Santorini, which is pretty good.  All in all, a restful and enjoyable evening– though J isn’t thrilled with adjusting to dinner times after 8:00pm. 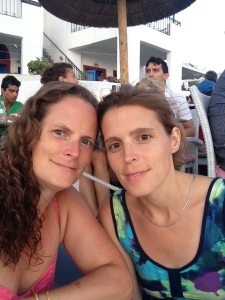