Woke up with no power again today. At this point, we’re getting used to that state of affairs. I checked in with Nicoletta about it, and she waved her hands around and said enough unintelligible words in Greek for me to understand that this was once again something affecting our whole neighborhood. Fortunately, it cooled down last night, so we were able to enjoy breakfast under the grapes again.

By the way, while sitting at the corner taverna in Koumani with George and the owners (Dmitri, Margaret, and their son Peter) last night (we went there when wifi in Xirocambi proved too fussy), an American woman came over to introduce herself to us. In one of those small-world turns, we learned that she and her Greek-American husband (who hails from Koumani) owned a pizza restaurant in our hometown of Hamden Connecticut in the 1970s — a place called Acme Pizza on Dixwell Avenue.  That was unexpected.

On our way out of town down to the beach this morning, we passed by the electrical workers on the road.  We’re pretty sure that they were violating every OSHA regulation possible — wires and cables were everywhere, and there was nary a hard hat nor a pair of gloves in sight.  But we learned today that that’s par for the course here.

As far as our beach experiences today, there’s not all that much to report.  We swam in the relatively flat water of Skoutari’s “second beach,” then walked over to the “first beach” when we wanted some shade (don’t worry, mom — we’re using lots of sunscreen and spending at least half of our time under thatched roofs and umbrellas).  Skoutari has shallow, clear-as-day water and a very secluded, quiet, almost-locals-only feel. 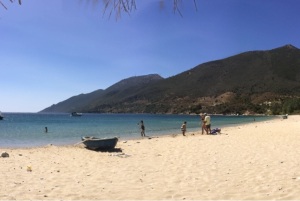 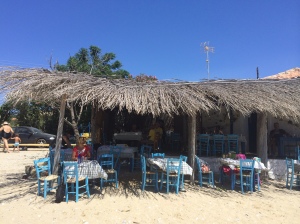 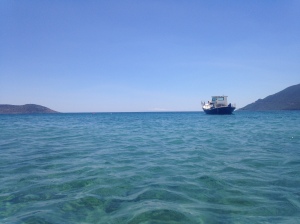 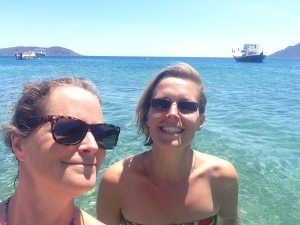 We sat at a taverna reading until lunch time, then had an excellent Greek salad for lunch. Soon after we ate, George waved us over — he’s working on restoring the small 12th century Santa Barbara chapel that sits right on Skoutari beach (and is currently covered in blue industrial plastic).  He invited us over to the see the chapel, and we walked around the work site — no hard hats, no closed-toe shoes — looking at the restoration work (mostly repointing, from what we could see) and the frescos. 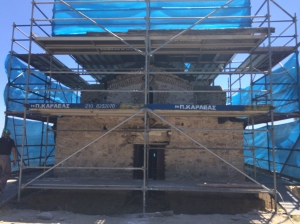 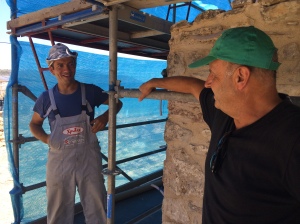 Then Nikos, another worker at the site, invited us over to see the sand-sifting device a few meters away from the chapel. 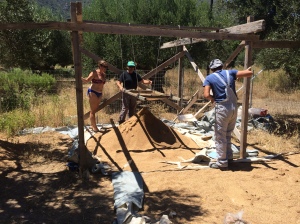 Nikos then explained that the chapel had once been surrounded by tombs — “mother, father, grandmother …,” and then he pointed to three clear plastic bags near his feet and smiled.  The bags had bones in them!  We could see an actual human skull!  And there was a box behind them with long bones (femurs? tibia? a mix?).  We’re not clear what the bones are destined for — we couldn’t tell, given our limited Greek, whether they planned to rebury-them or throw them into the bushes.  And if you can’t really see what’s in those bags below, trust us — they’re bones. 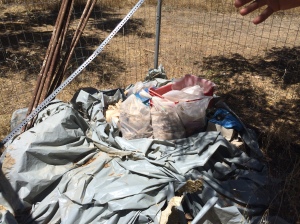 After that exciting excursion, we headed over to Mavrouvoni beach, which has lounge chairs and umbrellas that make it much easier to be completely lazy.  We lay reading as the wind whipped up a frenzy all around us — it was an incredibly windy day.  And there were real waves by the afternoon!  The windsurfers off in the distance were tearing across the sea. 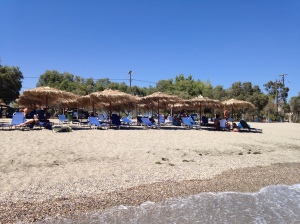 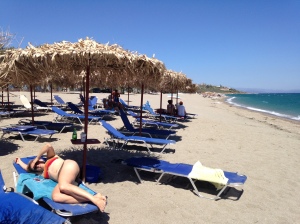 As evening rolled around, we headed into Gythio, a port town not far from the beaches.  It clearly has a mixture of working port boats and day sailors. 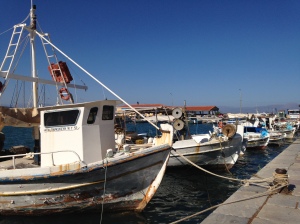 The town was developed most recently in the late 1800s, and we walked along the very pretty waterfront (a bunch of storefronts and cafes, nothing too touristy or high-end) until we decided to head up the hillside to see the houses.  This is a delightful medieval warren of rooftops and staircases and how-did-they-get-a-car-up-here twisty alleys. 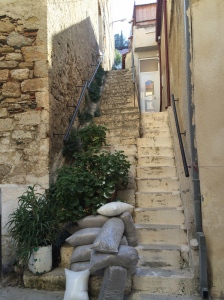 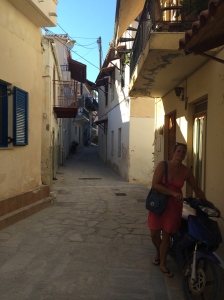 The houses look more and more ruined as you go uphill — by the time we arrived at great views hear the top of the hill, we were standing on the old rooftop of a ruin and eating tiny figs from a tree that hasn’t seem much care in a long time. 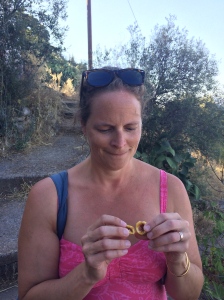 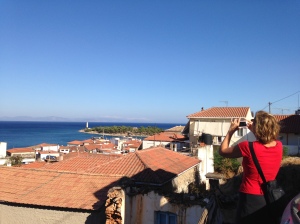 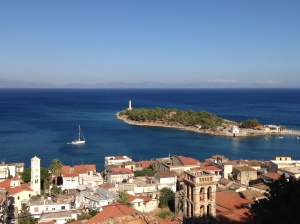 Then we walked through the Gythio shops, spending the longest amount of time in a sweet shop (this should surprise no one who knows either of us). 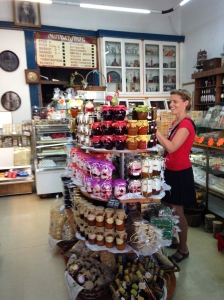 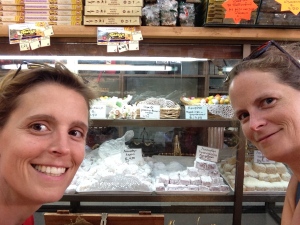 Now we’re at the slightly touristy Aurora Cafe sitting in waterside couches and sipping over-priced (but very strong) mixed drinks, about to wander down the waterfront in search of a restaurant that will serve us fresh fish (but not sardines — J has drawn the line on that suggestion). 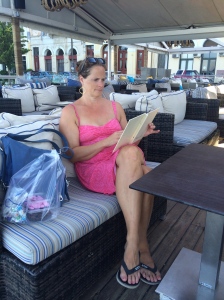 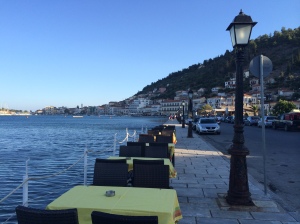 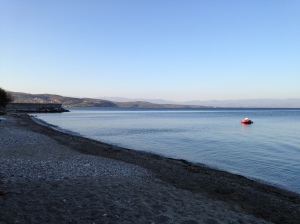