Left the house at the crack of 9:15 (earlier mornings are a challenge, given how late we end up staying up at the tavernas). Drove over to Mani, the only region in Greece never to have been fully defeated by any invading force. In other words, it’s an area of sheer cliff faces, steep mountains, and no water. It’s beautiful in an eerily empty, dry, rocky way. The roads are windy and insane (the Greeks are fairly arbitrary about their guardrails), and then every once in a while a small village will pop up to surprise you with its stone houses and Byzantine churches right up against both sides of the main road. 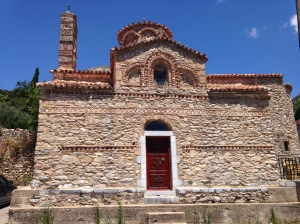 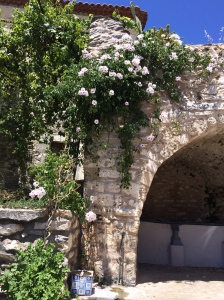 We started our day in the largest town in Mani, called Areopoli.  Our first stop was their Saturday morning market. It had quite an array of wares, from purple plastic chairs and terra cotta jars to honey and marmalade to fruits and vegetables that had probably been picked that morning. 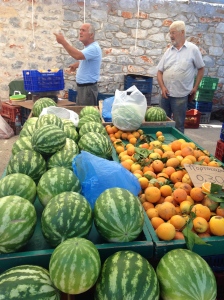 The city of Areopoli was well kept and clean, with an attractive old square. There was lots of green in the way of plantings, and many of the houses were set back in an unusual way from the twisty roads: instead of having buildings right up on the street, walls and gates lined the roads instead, which made it feel a little more spacious and elegant than some other smallish towns. 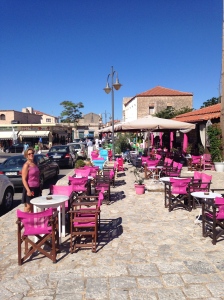 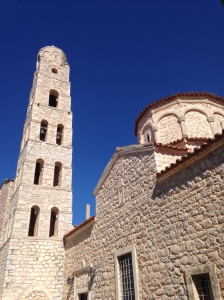 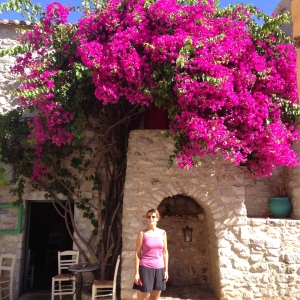 We took an unplanned meander down through the town enjoying ourselves thoroughly. There’s lots to do and see without it seeming very touristy. We’d say that this town is vastly underrated, at least by our guidebook.

Our next stop was just down the road, at the Pyrgos Dirou Caves. Jossie survived!  (Small spaces aren’t her thing).  These are considered some of the best caves in Europe, 14 kilometers long and remarkable. You start with a 25-minute boat ride; J and I had the front seat, which meant we had the best view of the pools in front of us but were at constant risk of decapitation by a stalagtite (the passageways are tight, to say the least, and our boatman would say “get down” just a fraction of a second too late every time). 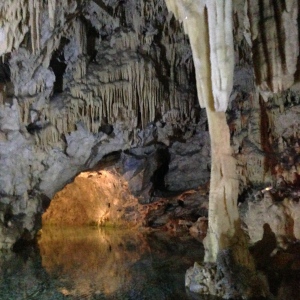 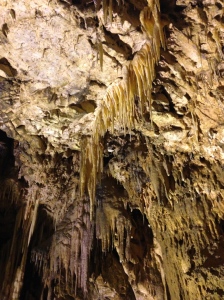 Then you get out of the boat and walk through the caverns on your own for about a quarter mile. We were amazed both by the scenery and by the fact that so many people had snapped off stalagtites throughout the cave — you would think that if the world had such a valuable resource, people would take better care of it. We spent a while discussing the Greek government’s oversight (or lack thereof) of the county’s environmental resources and their approach to tourism.

Then you come out of the caves, you’re struck by sunlight and a view of the water: 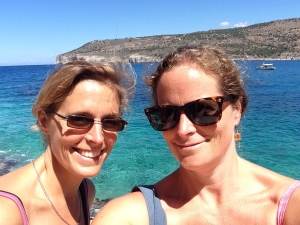 Drove up the coast, which provided stunning landscapes of ocean views, endless rock terracing, a gorge, an old Ottoman fortress, and a lot of beach villages with “nouveau” Mani towers — the first significant new development we’ve seen in this area.

And this was our view down into the Milolangato gorge area:

Our ultimate goal was the small town of Kardamyli, which is slightly wetter and greener than the lower Mani, and about which our guidebook author (Rick Steves) absolutely raves. We had lunch at Ritza beach (“beach” is used loosely here — it was all rocks). The tatziki will keep us safe from vampires for at least a week. Then we wandered through town — cute, but more touristy than we’d expected — though most of the stores were closed for the afternoon (almost nothing is open here from about 3:00 till 6:30). We did find delicious frozen yoghurt, however, with quince spoon sweet and pistachios. 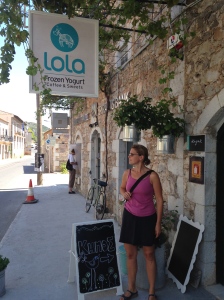 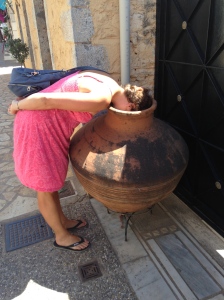 We doubled back on our original route, this time in search of a beach.  We thought we might go to Stoupa, but I took one look and gave it the name of “Brollyville” — it had more beach umbrellas than I’d ever seen in one place before. 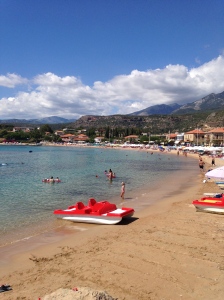 So we wended our way down to Agios Nikoloas, a fantastic beach with green-blue water and big waves. 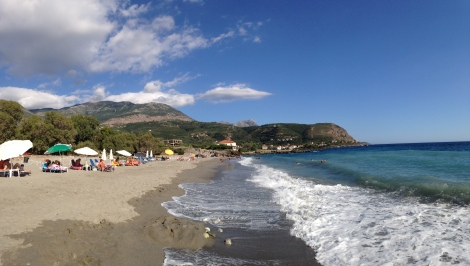 We napped, read, swam, and leapt in the waves until the early evening, then took the long way (twisty roads, up and down, with incredible mountain and ocean views) back to Gythio.  We had dinner again at Saga — they have my favorite Greek salad so far, and their spaghetti with shrimp was excellent.  They also have wonderful local wine, the best olives we’ve had here, and two free desserts:  a remarkably good oven-baked apple and a mealy-ciannmony-cakey thing that we cannot stand. This was our view from dinner — it’s where Paris is said to have taken Helen of to his homeland. 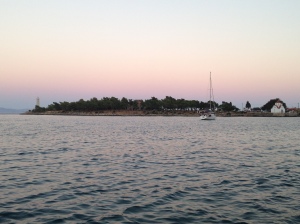 Now we’re back at the taverna on the corner in Koumani, listening to the blaring music coming from the other taverna two houses over — they’re hosting a wedding that has their taverna bursting to overflowing.  J is falling asleep at the table, so we’ll add more photos to this blog entry tomorrow!