Arrived in Little Rock yesterday evening.  Saw very little of the city, because my B&B is on the same side of town as the airport.  It’s a lovely neighborhood — the Governor’s Mansion is about six blocks away — with a great variety of houses all built in the 1880-1910 period.  These are huge houses, largely a mix of Victorian and Arts & Crafts, on lots surprisingly small in comparison.  Robinwood B&B is a corner house with two beautiful sun porches (good, because it is unusually cold here right now).  I really like my room — it has an anteroom that’s a sort of office/closet that makes everything feel pretty spacious.

Had dinner and drinks at South on Main, which is a wonderful place that I cannot recommend highly enough.

After breakfast this morning, I drove an hour down to Hot Springs.  It’s not a very inspiring drive; the first half was filled with billboards and stores and general roadside unattractiveness.  But I did learn that these are things that I could do in Arkansas, should I have a mind:

Hot Springs is a fascinating mix of the old and the icky-new.  On one side of the main drag is Bathhouse Row, a series of eight buildings that were erected in the early 1900s so that people could come down and “take the waters” (think Baden Baden, but without the Germans).  These buildings are ornate and impressive: 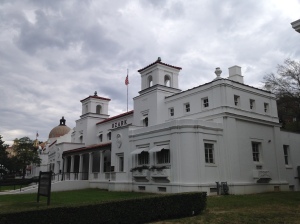 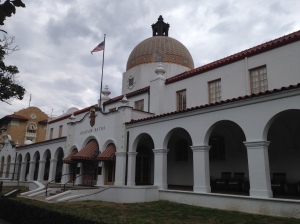 I spent a little over an hour taking the waters at the one bathhouse that has been continually functioning as such for all of its 103 years in existence: 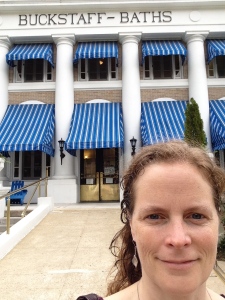 “The baths” today are fairly similar to what they might have been a century ago, though now you have perhaps a few more people and a bit less personal attention.  Here’s how they work:

All of this is directed by very efficient bathhouse employees, who spend a lot of time trying to make sure that you’re always covered by a sheet or a towel, even though the sheets and towels get so wet that it hardly makes sense to have them at all.  I found it difficult to do the whole “baths” thing at first, since I’m not used to lying around and doing nothing for long stretches of time.  But after the first little while, I cheerfully adapted.

The one question I still have is this:  today, the water they use in the baths seems to be regular city water.  But back in 1912, would they have used water from the hot springs?  Because up the hill behind the bath houses, you can see places where springs erupt from the hillside, and they are steaming (the water is about 134 degrees F). 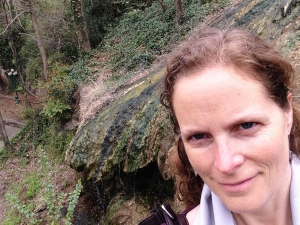 You can’t really see the stream or the steam in the photo above, but you can see the slimy algae that has adapted to grow in this extra-hot spring water.

Had lunch at The Ohio Club, which was once a gambling hall frequented by Al Capone.  They still have their original bar!

The Ohio Club is situated across the street from the bathhouses, one small gem tucked in between block after block of tacky tourist shops.  This aspect of Hot Springs made the town hard to love — it looks like it should be quaint and pretty, but only about a quarter of the town looks that way (though in all fairness, I should note that I didn’t go more than a hundred yards up into the National Park area above the town).

Drove down to DeGray Lake Resort State Park to go horseback riding.  Had a lovely ride by the lake — very meditative, since we weren’t allowed to go faster than a walk, and very beautiful.  The morning showers and clouds had cleared, and the trail ran alongside the lake most of the time.  We saw a fox running very close to the horse trail!  And I loved my horse, an athletic but cooperative beast named Bozo.

There’s very pretty country an hour south of Little Rock:  rolling hills, a mix of trees, and a lot of open space.

Leisurely evening:  a snack and a drink at South on Main (yum!), reading in the sunroom at the B&B, and dinner at Ciao Beci (fine, but nothing to write home about).