Singapore has pretty much everything an American could want (minus the chewing gum, of course), but there are a few things Singapore needs:

Let’s talk about crossing the street here.  If you’re at a corner, you look to see whether you have a crossing light (the “green man”) on the other side of the street.  If you don’t see one, look up — there may be an overpass.  Nothing there?  Look down — there may be an underpass.  No?  Look toward the middle of the street — for no apparent reason, the intersection may be inconveniently located mid-street rather than at the corner.  Nothing there?  Scratch your head and wonder how much trouble you’ll get in for jaywalking.  Repeat, because if you’re walking around all day, you’ll have this experience many times over.

Singapore could also probably use some good conversations about (1) race/ethic groups and (2) how disgruntled people really are about various government programs and policies, but I don’t have enough information to write intelligently about those things yet.

We started out our day at the hyper-efficient Employment Services office, where we had our pictures and fingerprints taken so that the government can keep track of us (as if the video cameras everywhere we’re already doing that …).  For a government office, it was surprisingly pleasant, and it came with a great view:

As you can see, our days have turned somewhat cloudy and rainy.  That’s actually good for walking around, as long as you don’t get caught in a downpour (which I avoided by going to a museum, while Prescott headed up to SAS for a job interview).

My trip to the Asian Civilisations Museum (note the British spelling — not my idea) was lovely.  It’s in a wonderful building that used to be a British government entity:

The museum itself is divided into five interesting (if oddly chosen) sections:  trade and exchange of ideas, faith and religion, the Chinese scholar’s study, a contemporary room, and Chinese porcelains.  The museum is more craft and sculpture than art.  The idea is to try to understand Asia through Singapore.  Here are a few things that I saw there: 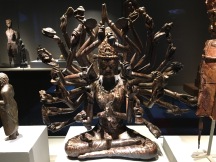 And for those of you “Guardians of the Galaxy” fans, I also found Groot: 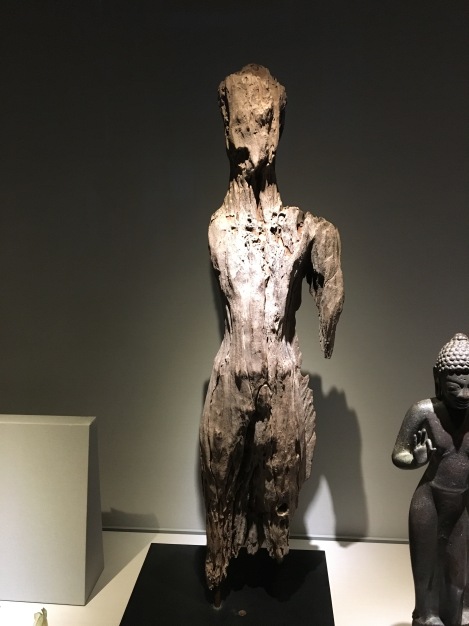 The museum is in the colonial district, so after a tour with a very informative docent from the UK, I walked over to St. Andrew’s Cathedral (in the words of my guidebook, “funded by Scottish merchants and built by Indian convicts:).  I don’t think there’s a single other building like it in Singapore.  It feels totally out of place — more like something you’d see in Hawai’i than here.

Met Prescott for lunch at a great hawker center called Lau Pa Sat in the Central Business District (CBD), which is where they hide all of the people wearing collared shirts in Singapore.  Seriously, you would think that you were in the middle of New York City — it’s all high rises and bustle — except that most of the people doing the bustling and looking professional are male.  That was odd.

We wandered along the Singapore River, which allows fascinating views of both old and new Singapore (note the tiny old shops and houses along the quay on the right, now completely dwarfed by the CBD).  It’s odd to think that this river used to be littered with boats — now it’s pretty much empty save for the occasional tourist vessel (the government got rid of all of the boats because they were old and cluttered and smelled bad).

We had great views of the Marina Sands area: 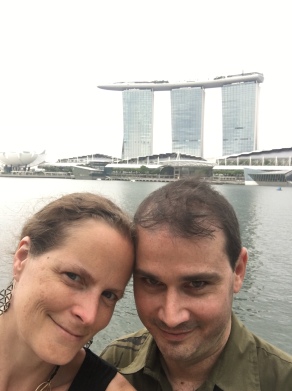 And then we stumbled on the Singapore Merlion:

We ended our afternoon journey with a visit to the Raffles Hotel to indulge in colonial nostalgia (ok, Prescott has none of this, and I’m not sure who is colonizing whom when they charge $30 ($22 US) for a Singapore Sling.  But this is where the Singapore Sling was invented, so how can you not go for it?).

2 responses to “Street Crossings, Groot, and the British Empire”