We took an afternoon adventure yesterday to Kampong Glam, the old Muslim section of Singapore. When the British claimed Singapore in the early 1820s, they divided what’s now the downtown area into different regions according to ethnicity.  They gave Kampong Glam to a sultan and sent all of the Arabs and a good number of Malays there.  The tourist draw today is Arab Street, which is now home to lots and lots of shops; you’ll find an unexpected mix of carpets, lamps, fabrics, and little hipster boutiques selling cool clothes and random Japanese tchotchkes.

This area is also home to a number of different mosques, the most striking of which is this one: 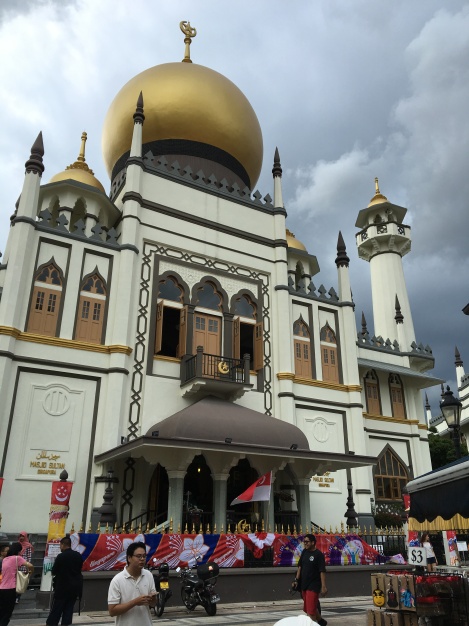 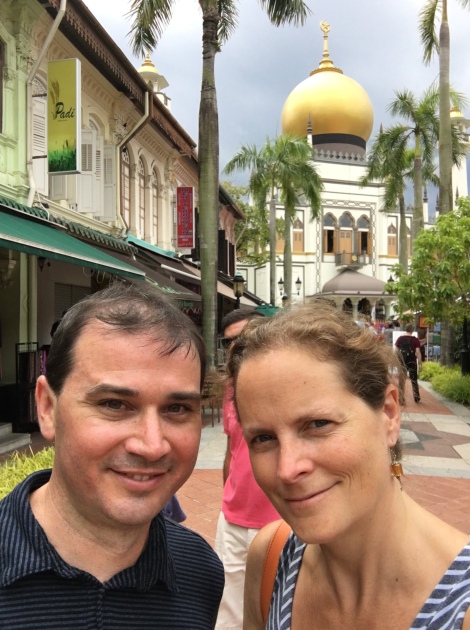 Kampong Glam is also an area with a lot of hip bars, some of which sit right across the street from signs that say “please be respectful and do not drink in this part of town.”  I’m not sure how to reconcile those two.

We ate vegetarian murtabak (stuffed prata), at Zam Zam, a restaurant that claims to be over a hundred years old (that’s ancient history for Singapore).  You can look into the kitchen from the street.

We then proceeded a few MRT stops away for the random activity of the weekend:  playing laser tag in the basement of a shopping mall with the Yale Club of Singapore.  We had a tremendous amount of fun — while it wasn’t the networking/friend-making event I had hoped for (and only three people, myself included, had gone to Yale), laser tag is just a plain old good time.

Our final stop of the evening was Little India.  There should be huge warning signs about going to Little India on a Sunday night:  the streets are packed, the sidewalks are packed, the parks are packed.  I’m not sure I’ve seen such a large throng of people outside of Times Square on New Year’s Eve — and in this case, 99% of the people are young (or young-ish) Indian and Bangladeshi men.  I’ve heard that Sunday afternoons are the one afternoon that migrant workers have off, and they all go to gather and hang out and meet friends in Little India (more on migrant workers in a later blog post — I need to learn a little bit more about what’s going on here, but there’s clearly a problem with the treatment of transient workers in Singapore).

We’d gone to Little India hoping to track down some inexpensive home goods. After fighting our way through the crowds, we found ourselves at The Mustafa Center, a 24-hour department store that takes up two full city blocks.  It may be one of the most baffling places I’ve ever been.  The aisles are narrow, there are no maps or guides to help you find things, and it’s filled with stuff.  Want toothpaste?  There’s a wall of it.  Oh wait — keep walking, and go around a lot of corners, and up and down an elevator, and there’s another wall of it.  Yup, two walls of toothpaste in one department store.  Of course, there might have been more; we only made it through about a quarter of the building (though I’m really not sure — you could actually get lost in this place and spend a while figuring out how to find the exit).  This place is endless.  It’s like someone took Wal-Mart, made the aisles tiny and the layout incomprehensible, stacked it on four floors, and crammed it full of products (Prescott is standing below in the cloves and cardamom section — and that’s not even the whole thing). 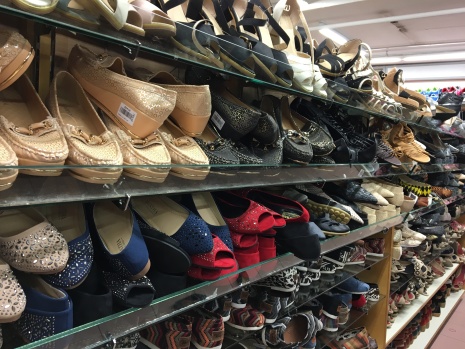 There’s stuff everywhere.  It’s awful, but we did find most of what we came looking for — and they do have a wide variety of departments:

Spy gadgets?  Are those legal here?  I didn’t ask — I was too busy being overwhelmed — but it doesn’t sound like a government-supported activity.

Today was my first day with the full faculty at SAS.  “First day” translates to “lots of meetings day.” It was quite a scene:  SAS has 900 employees, 400 of whom are faculty, and 120 of whom work in the high school.  I have no idea how I’m going to figure out who everyone is — my office is centrally located, which is good, but it’s going to be hard to keep track of 120 high school teachers (never mind the middle and elementary school folks).  I have my work cut out of me.