We spent Saturday on the southeast side of Singapore exploring an area known as Katong.  This is an old, once-wealthy neighborhood inhabited largely by Peranakans (Singaporean descendants of Chinese immigrants).  The area is well-known for its architecture, which includes features like gabled roofs, colored tiles on the floors and walls, and swinging front doors (hard to find these days, because they don’t do much to keep in the AC). 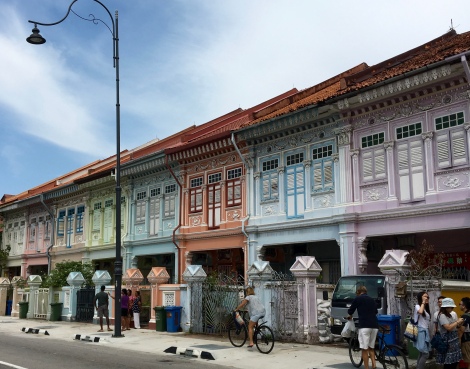 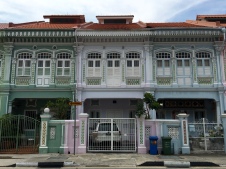 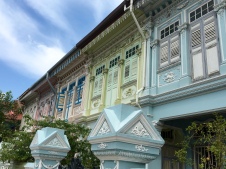 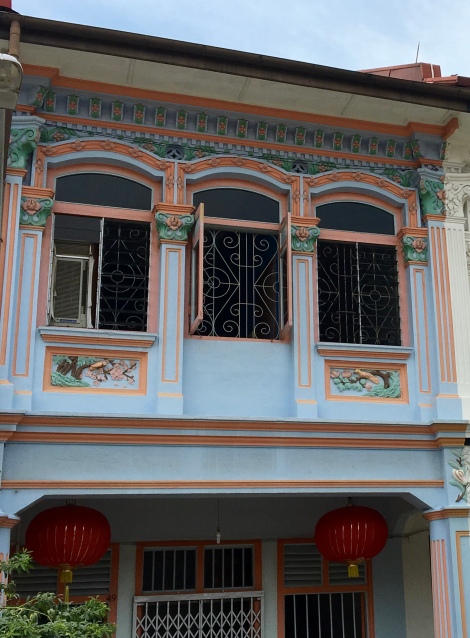 Since the area is traditionally Chinese, you can find little altars everywhere: 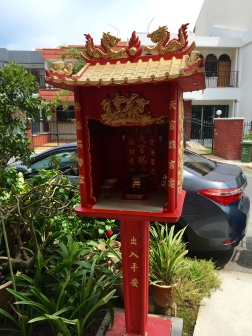 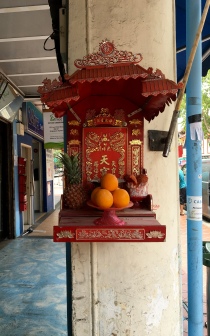 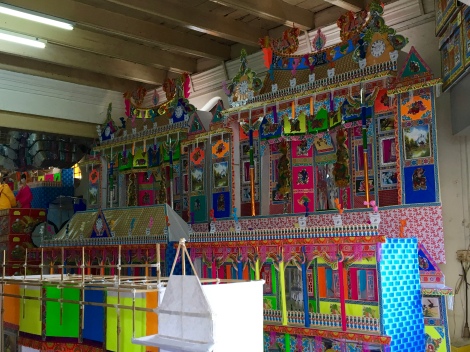 A husband-and-wife team spend all day, every day, creating these elaborate houses — each is about five feet long and four feet tall — only to have them shipped out for imminent destruction.  The finished houses even have little tiny people and animals (which, presumably, get burned along with everything else).  I’m not sure why the ancestors want sacrifices of tiny people and horses, but I’m sure they have their reasons.

Speaking of tiny, there was also a store that sold itty-bitty ceramic food and tea sets: 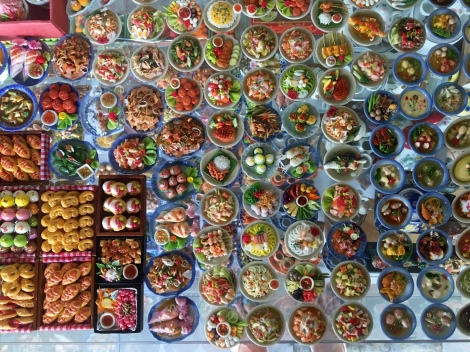 But the area is becoming increasingly gentrified, with dog cafes and chocolate parlours and this:

We also found a store called Cat Socrates, which sells air plants and clever Singapore memorabilia and crafts — but which is mostly memorable because it has a very patient and very soft cat named Zoozoo in the front window: 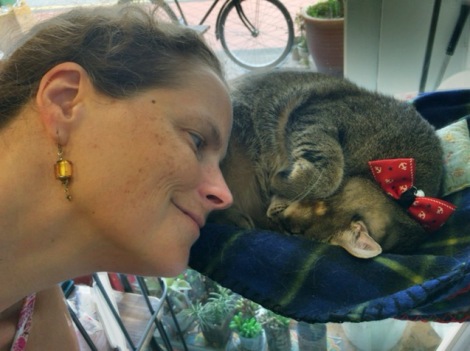 The most surprising thing we found in Katong was an abundance of outsider art in front of a liquor store.  This is incredibly unusual in Singapore — we’ve seen nothing else like it (and someone should suggest this guy to Baltimore’s Visionary Art Museum). 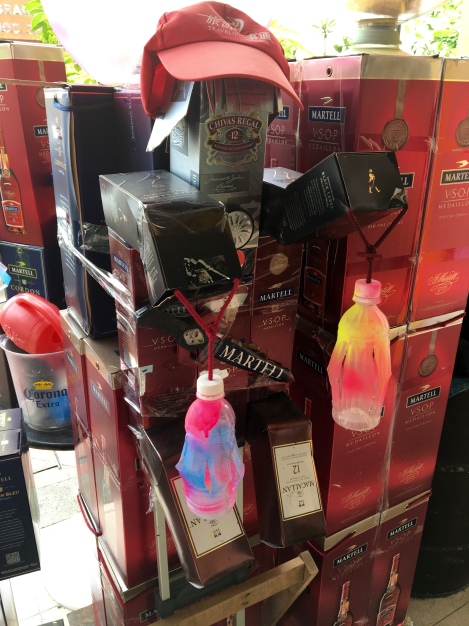 But we did not just go to this neighborhood for the shops and the architecture — we went because it’s an area also well known for its fantastic and diverse food.  We started out with fried bananas, a Malaysian specialty:

We then had Vietnamese food — purportedly the best on the island — for lunch. 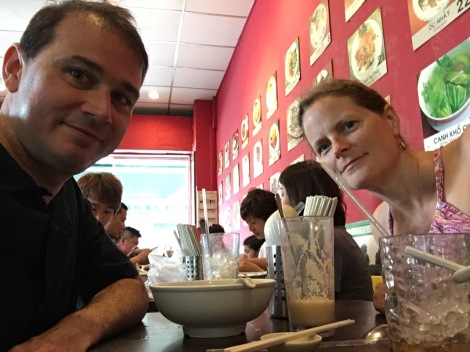 And we rounded our culinary out with stops at a homemade ice cream shop and a bakery.

We then went over to Marina Bay, where we had bought tickets for an experience called “Time Between Us” that was part of the Singapore International Festival of the Arts.  Basically, this guy built a tiny house out of reclaimed wood, wrote all over sections of it with chalk, put an actor inside, and had him tell a “story” to a group of about eighteen people.  It was warm, and I was sleepy, so I’m not sure what the story was about (or whether it was a story at all), but Prescott has reassured me that I didn’t miss anything.  That said, the house was cool: 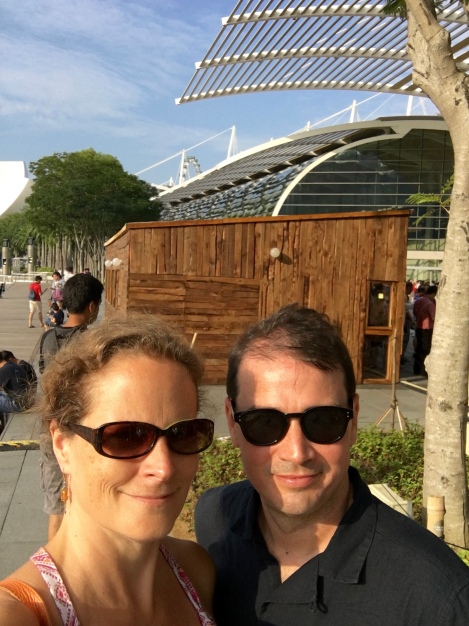 And it was surrounded on two sides by Pokemon Go players:

We had a great view after the show:

And then we had dinner at the adjacent mall.  The pizza — we’re on a quest for good pizza here — was fine, but the mall had three more interesting points of note.  First of all, there’s a fake river on the ground floor with fake gondolas, which is just bizarre (and so very new Singapore):

Secondly, I found the mall exciting because a comics convention was going on next door, and I am fascinated by the elaborate nature of cosplay outfits: 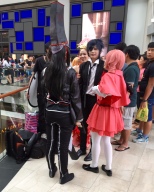 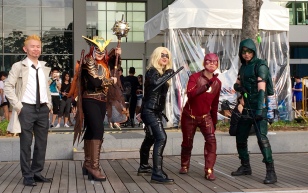 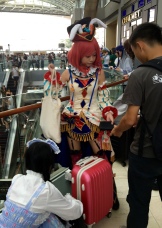 And finally, the mall sold cookies named after me! 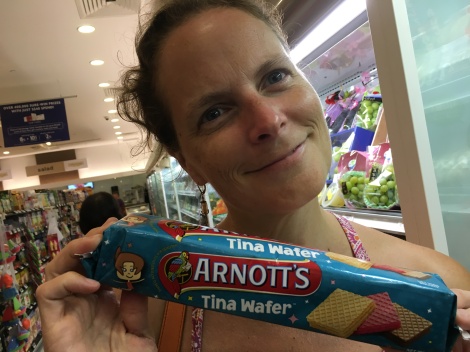