Our Sunday was unusually low on photographs.  We started out with a rainforest walk in the park near our house:

Then we engaged in a number of tasks that no one needs to see photographed, such as going to the gym and cleaning our apartment.  Prescott headed off to coach an improv troupe while I went to an American Society of Singapore welcome back party at a trampoline park.  The trampolining was incredibly fun.  There probably would have been some good photos there (and some entertaining ones, since it’s been over fifteen years since our jumping days in Hawai’i), but my phone was shut in a locker.  So I figured, since I have no other weekend photos and it’s nearing the end of Mid-Autumn Festival time, that I would share pictures of mooncakes.

What is a mooncake?  It’s a Chinese baked good that people buy and give to each other by the thousands at this time of year.  Here are two examples:

What’s in a mooncake?  If you’re lucky, you get red bean paste or lotus seed paste with macadamia nuts.  If you’re unlucky, you get a five kernel mooncake, which involves a lot of mysterious and surprisingly icky-tasting seedy things (I swear mine included barley). 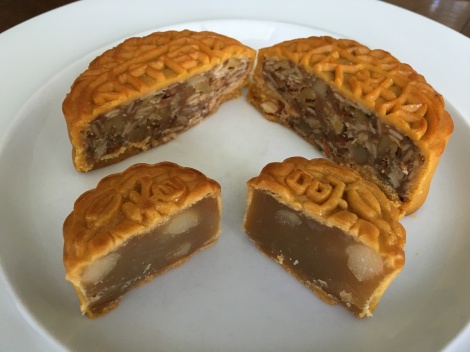 And if you’re really unlucky — though I suppose the Chinese would disagree — you get a salted egg in the middle.

So why mooncakes, and why the salted egg inside?  Well, mooncakes because you’re supposed to give sacrifices to the moon in the eighth lunar month.  And the salted egg because people say that it is supposed to represent the moon.  Other people cite a legend that the Chinese were able to overthrow the Mongols at the end of the Yuan Dynasty by smuggling messages in mooncakes, though it’s unclear whether that’s the precursor of the salted egg, the forerunner of the modern-day fortune cookie, or neither.

The most wondrous thing about mooncakes is not the cakes themselves — they’re ok, at best — but the boxes in which they arrive.  Mooncake giving is an elaborate thing around here, and the boxes are simply stunning:

But that’s not enough; each mooncake then comes in its own individual box:

Not a bad way to celebrate, all things considered, especially after the stinky joss fires of the Hungry Ghosts!