Hard to believe that we’re in Vietnam … I hear that word and all I think about is of teaching US History, of a war that was very much real to me when I was growing up, of a war that took place on the other side of the world.  Well, we’re here now, and that war could not possibly feel farther away.  I’m sure that the Hanoi we just wandered through — loud, crowded, commercial, motorbikes rushing by, lights flashing, American pop music blaring — bears little resemblance to the Hanoi of the Vietnam War era.  It’s all pretty disconcerting.

We arrived at the Oriental Central Hotel after a long taxi ride in from the airport.  This is a small hotel for which we’re paying about $50 a night, and while the rooms are New York City sized (and we have no window), the service is nothing short of amazing.  The employees actually come out a stop traffic so that we could get safely from our cab to the hotel door (this practice may just be to preserve the lives of their paying customers — more to come over the next few days on traffic in Vietnam).  Then, while we were waiting for their sloth-like photocopiers to make copies of our passport, they brought us yummy guava drink and candied nuts (with hand towels and orchid blossoms, of course).

The receptionist next spent about ten minutes drawing points of interest on a map.  So far, we’re sold on the service experience here.

Hungry, we went out to find dinner.  Walking on the streets of Hanoi is an experience.  First of all, they don’t really have sidewalks — or they do, but they’re often used as motorcycle parking lots or storage areas or trash spaces or makeshift market stalls.  So most people walk in the streets.  But the streets are narrow and also used by motorcycles and cars. You walk near the curb and hope no one hits you. It’s like Bangkok, but with far less space for pedestrians.  The experience pushed all of Prescott’s it’s-too-crowded-here buttons, but he breathed through it.

We found a restaurant called Cha Cha La Vong, which Prescott helpfully noted sounds like a stripper name.  They pretty much have one thing on the menu:  grilled fish served with noodles, scallions, dill, peanuts, and mystery sauces.

Much of it is cooked table-side:

We then wandered through the night market, which is crazy-crowded.  They mostly sell practical stuff — you can buy anything from bras to jeans to belts to iPhone cords.  We didn’t see much that was appealing, though we did admire the laser-cut cards … 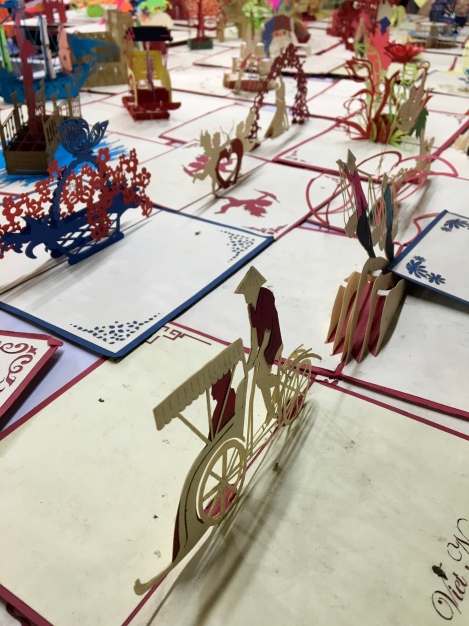 … and the random “tribal” bags and stuffed animals … 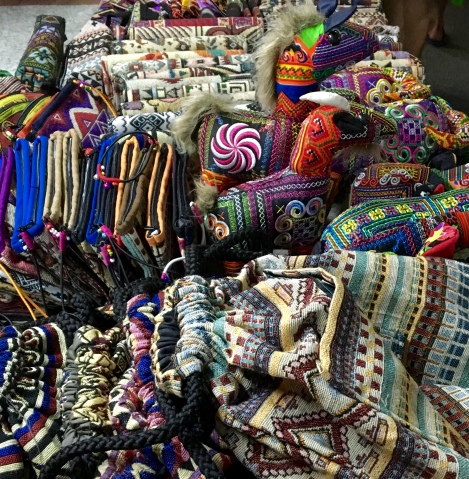 … and the fans (I now own one — they actually come in handy in this part of the world). 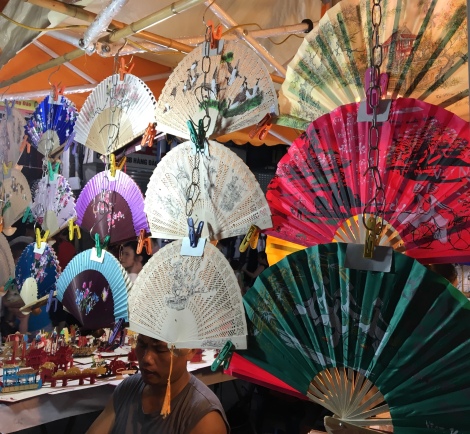 I also stopped to admire the balloon man (he reminded me of something out of a kid’s book): 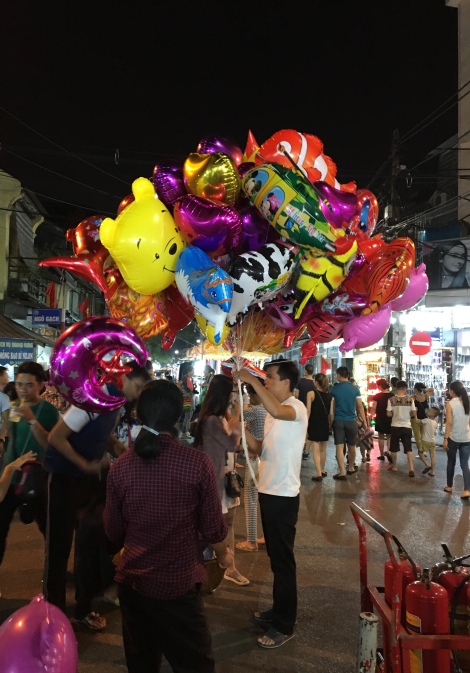 As we were getting near the end of our walk, I saw this large display behind a handcrafted flower seller.  It made me realize that I know very little about Vietnam’s current political situation.  Looks like it’s time to do some research!