Entire books have been written on the streets of Hanoi, and with good reason — they’re crazy.  We sat in a cafe yesterday overlooking an intersection (one with no stop light or stop signs or crosswalk), and I watched traffic for almost an hour.  It’s like watching chaos theory in action.  First you have the way traffic moves, which is wild.  Here’s an average moment at a crossing:

Note the bikes going both ways at once and — if you look closely near the top center — the pedestrians in the middle of it all.  Prescott says that traffic her is a thousand near misses every second.  To give you a better sense of how this all looks (and sounds — note the honking at the end, which is relentless), here’s a video:

Then there are the things that people carry.  We saw two motorcycles carrying large stacks of bricks (we have no idea how those bikes were actually able to move).  Here are a few examples of other things we saw yesterday: 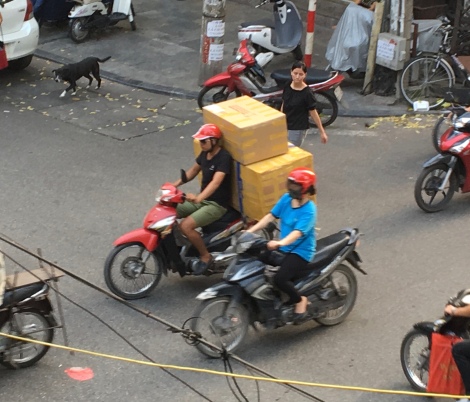 Yes, I’m a huge fan of the balloon-carrying around here.

The streets of Hanoi are also known for their cafes, which you can find just about everywhere.  They can also hide: Prescott and I have been to two cafes that involve walking back through the first room of a shop or through an alley, into a courtyard, and upstairs to a room that, from street level, no one would know exists.  One of the more visible cafes that Prescott and I went to yesterday is called “Cong.”  It’s done up in army green, and the wait staff all wear fatigues. 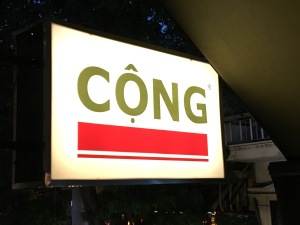 The strangeness of this was not lost on me.  I can’t imagine what it would be like to be there as someone of my parents’ age, for whom that word had a much more intense meaning.  But this city has, to all outward appearances, very much moved on from the war.  Cong served us delicious coconut milk smoothies, which were really a lot like shave ice (Prescott’s was coffee flavored; mine was mung bean — yum!).

We also had massages yesterday, which was lovely after a long day on our feet.  Then we had pho for dinner — delicious — and wandered around the Old Quarter.  The streets are crowded and busy at night, with motorcycles everywhere and people eating at restaurants that spill out nearly into the street.  There are also terrific alleyways, which are public space but make you feel like you’re wandering through someone’s backyard (because you get direct glimpses into people’s kitchens and living rooms, where they’re washing dishes or lying in their pajama pants watching tv).

Walking through the Old Quarter was a stressful experience for Pres (who doesn’t like crowds on his best days, and who had a motorbike back into him while we were walking).  So we sat down to unwind and listen to music while we ate some desserts, which was a great way to end the evening.