We woke up early on Thursday to make the journey from Hanoi to Ha Long Bay, one of the best-known sightseeing areas in Vietnam. If you say you’re going to Ha Long Bay, both locals and tourists alike sigh and get a far-away look in their eyes. We’d been told we were going someplace magical.

To get to Ha Long Bay, we took a bus from our hotel (three hours, including a full hour of picking guests up at their hotels in Hanoi) to a ferry (twenty-five minutes) to another bus (half an hour). I spent almost the whole first bus ride staring out of the window and making notes on what I saw. Here are some of my observations:

Our ferry ride was filled with travelers — lots of young people with backpacks. 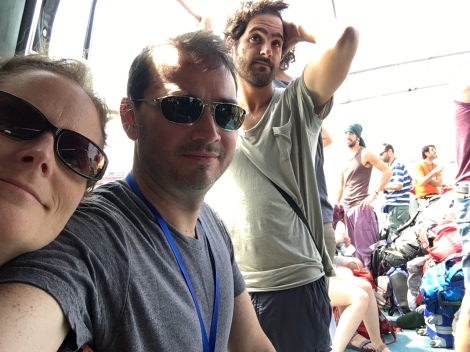 The second bus ride was much more stunning than the first, as we drove up into the green mountains of Cat Ba Island and had a view down to the ocean.  There were houses along the way, most of which looked pretty run-down, and I was struck by the thought (probably not at all original) that rural poverty in the tropics looks very similar the world round. We could have been in rural Central America and I would barely have noticed the difference.

Our bus took us to Cat Ba, a cheerless town with aspirations to something greater (they have impressive topiaries and public art for a port town with strip-mall-like architecture). We were whisked swiftly and efficiently through the process of getting onto our boat. Yes, Prescott and I had our own boat for the better part of three days and two nights. It was pretty spacious, as small boats go, and there were three Vietnamese young men on board to do the cooking, the captaining, and the guiding/translating. 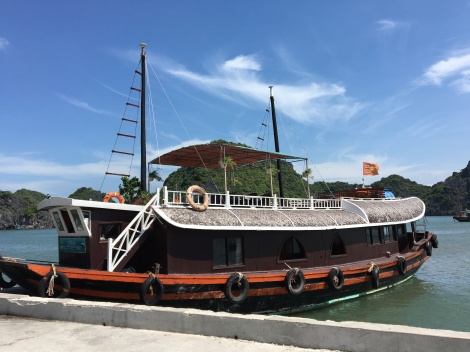 I should note for precision’s sake that we were not, strictly speaking, on Ha Long Bay – we technically spent most of our time on its neighbor, Lan Ha Bay. Our excellent guide, Quyen, was very clear about the distinction between the two bays, and it’s clear from the map that Lan Ha is south of Ha Long. But I may end up using “Lan Ha” and “Ha Long” interchangeably, because “Ha Long” is a term people know, and the two areas are geographically similar.

You don’t have to go very far out on this bay to be wowed by the limestone cliff formations, known as karst.  They’re everywhere, and pictures cannot do justice to the magnificence of the surroundings. There’s a reason that much of this area is protected either by the Vietnamese government (Cat Ba) or by its designation as a UNESCO World Heritage site (Ha Long Bay). 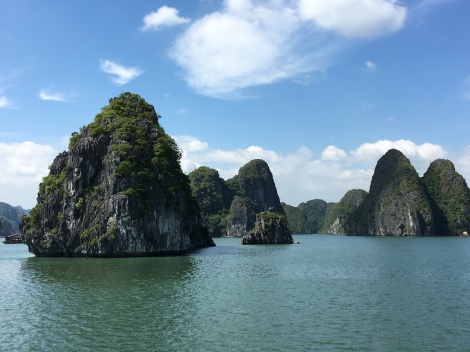 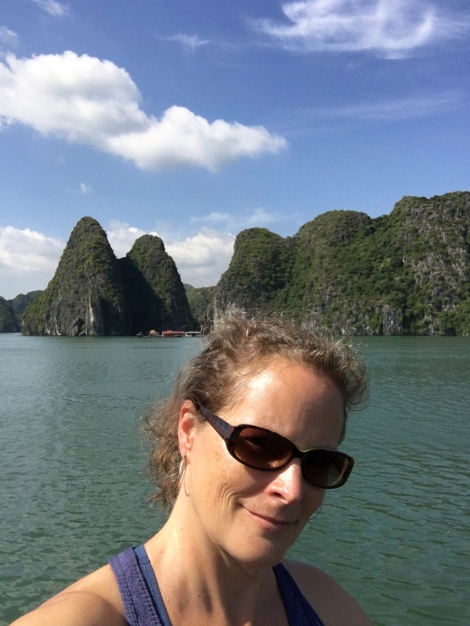 The other thing that’s notable about Lan Ha Bay is how many people live right out on the bay. Their homes are on floating platforms, and the residents are almost all fishermen. They fish for most of the week, keep their catch next to their houses, and then go to Cat Ba town once a week to sell their stock. I’ve always been amazed at the idea of people living on houses on the water, and lots of questions that will remain unanswered (how do people find spouses? What is it like to grow up as a kid on a 20×20 platform?).

I’m also fascinated by the many fishing boats out here — I’ll have more of them in future posts, but here’s one example: 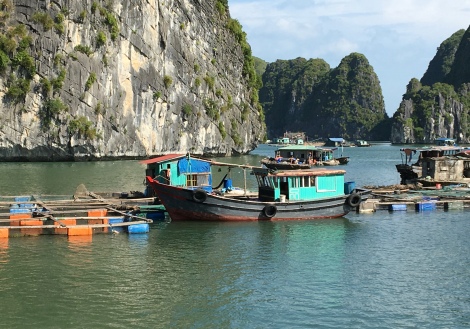 Our first destination (after lunch, which was so plentiful that it might count as a destination of its own) was a cycling/hiking adventure. We docked at a tiny pier, and Pres, our guide Quyen and I picked up bikes at what might loosely be called a bike rental shop (minus the shop, minus anyone to help you with your bike). Both the bikes and the seats themselves here are incredibly short, and the bikes had no gears, but we made them work.

Prescott, Quyen and I biked on a windy road up and down hills and into a lovely mountain valley. We passed goats … 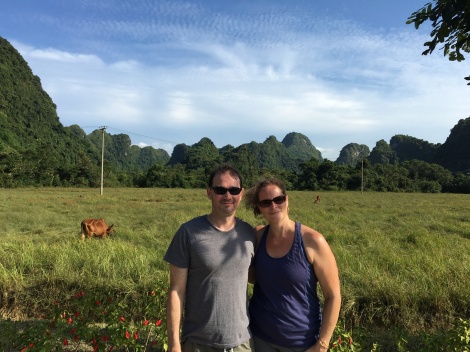 … and water buffalos keeping themselves cool. 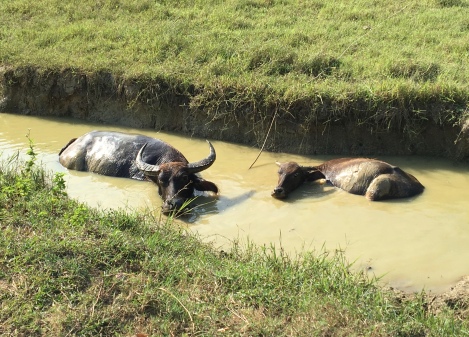 We cycled through a small village (population roughly 200) that dead ends at a trekking path (people don’t hike here – they trek). We climbed up, up, up, into Cat Ba Natoinal Park, largely over limestone rocks, through lots and lots of greenery. There were many different butterflies to admire along the way, though we were mostly too busy clambering to take much time for bug admiration (we did, however, take time to worry about the chances of our running into a cobra, and how to treat snakebites in the middle of nowhere). I was so glad to be out in nature – it was quiet, and the air smelled good, and my body was happy to be getting some strenuous exercise.

The views from the top were breath-taking. We just sat and stared for a long time. 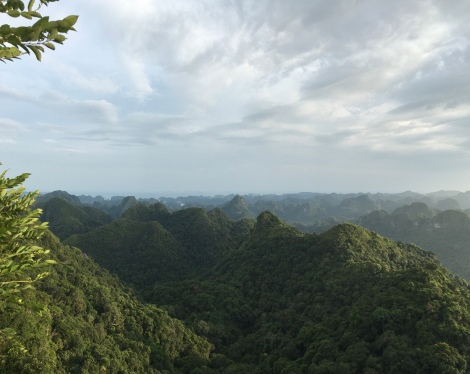 As we looked back down toward the village, the sun was starting to set — but if you look carefully, you’ll find a village in the bottom third of this picture:

I found a few new flowers on our way back down — here’s one:

And here’s Prescott walking toward the sunset upon our return to the village and our bikes:

After we cycled back to the boat, we went shopping! Here’s how our two different shopping trips worked:

Here’s the local shopping center (foreground) out plying her wares the following morning:

As we made our way to our mooring for the night, Pres and I took much-needed navy showers (there wasn’t much in the way of water pressure on the boat). We then had an enormous dinner that consisted of a tomato-cucumber salad, crabs, two large pieces of delicious fish cooks with scallions and dill, French fries, spring rolls, stir fried cabbage, rice, and sliced pear. I have no idea how they fit that much food on this boat.  And a shout out to Nina Knoche for teaching me how to eat crabs – though I should have paid better attention at the time!

Here’s our deck, where we ate our meals and spent most of our waking time when we weren’t out and about:

We ended our night sitting on the deck enjoying the cool (it had been Singapore-hot-and-humid in Hanoi) and listening to the stutter of the power generators on people’s house platforms. Other than that and the occasional dog barking (every house platform seemed to have a dog), it was quiet and calm, and the moon was nearly full and bright and beautiful.