It occurs to me that I should mention that all the time we were traveling through Lan Ha Bay, we were also traveling through the Gulf of Tonkin.  This has so much historical resonance that I’m having trouble wrapping my head around it. I asked Quyen what they call the Vietnam War here, and he said it’s the “Vietnam Resistance War.” Makes sense. It’s hard to be here and see the people and think of the thousands killed in the war.

We spent Saturday morning being buffeted by wind, which had been raging on and off all night (fortunately, our windows stayed put, though our toilet paper holder took a fatal nose-dive while we were sleeping). I spent all of my time up on deck anyway, because it felt so good to be outside. We motored for a long way, eventually going on a different course than originally planned because the seas were so choppy.  The wind in my hair tells the whole weather story… 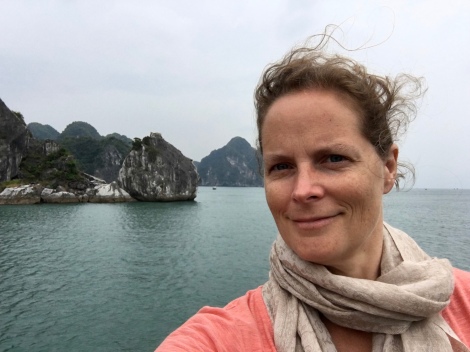 …as do the sound of the wind and the height of the spray here:

But that didn’t keep us from sitting out on deck: 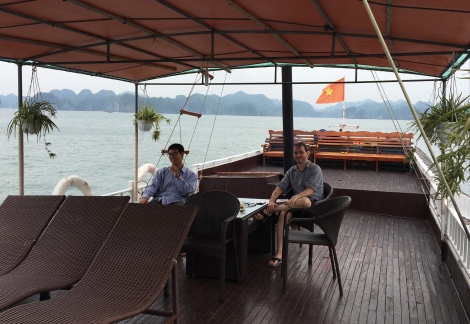 I took lots of pictures of fishermen (and women) because I’m fascinated by the various boats and mechanisms used in this occupation. There are no fishing regulations here – drag netting is fine, and you can keep all of the females and small fish you get. The good news (I suppose) is that the fishing looks to be very small-scale; from what I can see, it’s all done out of little (often very little), family-run boats. But there are a lot of them. 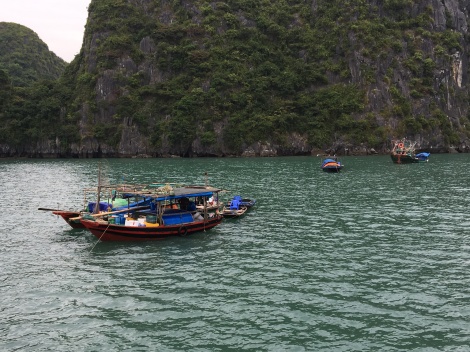 If you look closely, you’ll see a very large net at the front of this boat (between the boat and the house on the right): 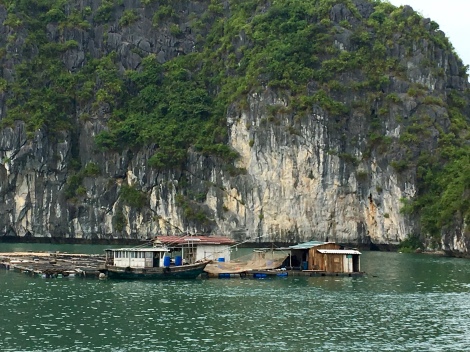 We eventually made our way to a secluded mooring, where we stopped for kayaking and lunch. This trip turned out to be much more of a kayaking adventure than I’d expected, but I loved that surprise. This time we did a “three tunnels to three secluded lagoons” excursion. Two of the three tunnels had very little head room, and the tide was rushing in, which was more excitement than I’d bargained for – but it ended up being great. 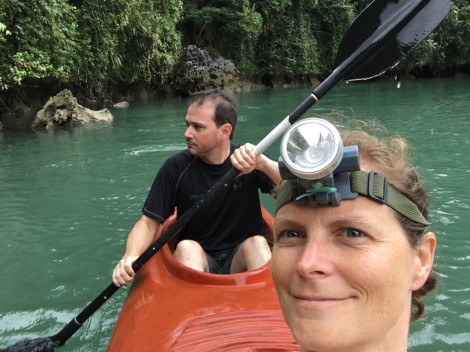 We also kayaked to Lady Beach, a small stretch of sand and shells topped with a temple. This shrine is still used by fishermen coming to ask for luck. I wasn’t allowed to go inside, probably because I was only wearing a bathing suit. Next time we go kayaking to hidden temples, I’m bringing a dress. 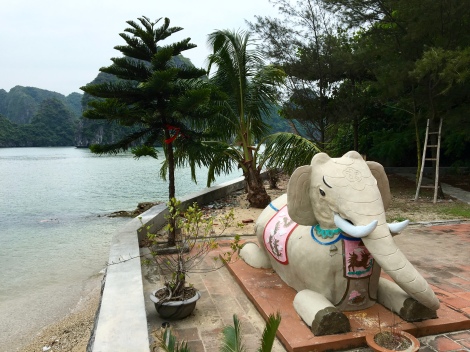 Still, I greatly enjoyed the beach visit. There were lots of great shells to collect, and we also went swimming. 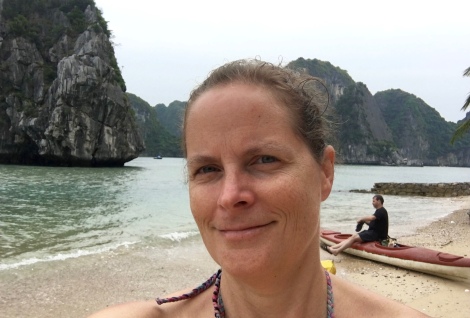 Quyen and Prescott had a good conversation about plastic bags, which are a huge problem on the bay in the areas where there are no marine trash collections (yup, those are a real thing). Apparently, people here burn the bags in big piles, which must be wreaking havoc with both their lungs and the atmosphere. In the alternative — as we witnessed on one of our trips to the boat shopping center woman — they just throw the bags right in the water with nary a backwards glance. It’s a problem. (Of course, plastic bags are a problem in Singapore, too – there are lots of them, and they all end up in a big incinerator. Granted, it’s a well-cared-for and well-ventilated incinerator, but the fact is that our bags end up getting burned all the same.)

We kayaked back from the beach and I spent some time diving from the deck of the boat into the water:

After yet another enormous lunch, our boat started heading toward home, and the sun began peeking out. We must have made good time on our return trip, because we stopped for a while at the kayak return platform. To amuse ourselves, we looked at large fish (every platform has some number of fish in storage, waiting to be taken to market or sold to tourists). They also had an extremely cute puppy:

We had only half an hour left on the boat after that, which seemed to go by in a blur of packing and “wow, the sun is out again” picture taking.

Our return to Hanoi was uneventful – another round of bus, ferry, bus. We passed the main entrance to Cat Ba National Park, which is mostly notable because it looks nothing at all like the entrance to any US national park I’ve ever visited: 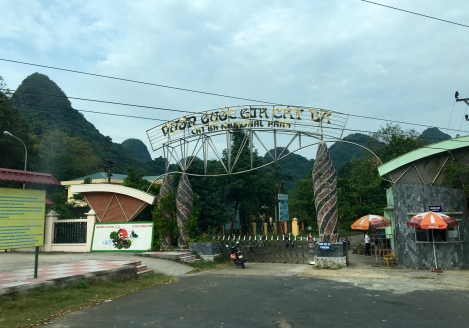 Our ferry was very crowded, and we were asked to sit inside.

Sadly, our seating location meant that we only saw glimpses of a terrific sunset:

One response to “The Gulf of Tonkin”