My day started with a rather soggy journey along the rail trail to the Bukit Timah wet market.  The rail trail is one of the few things in Singapore that isn’t paved in any way, and between the mountain bikers and recent rains, the walk was on the muddy side. 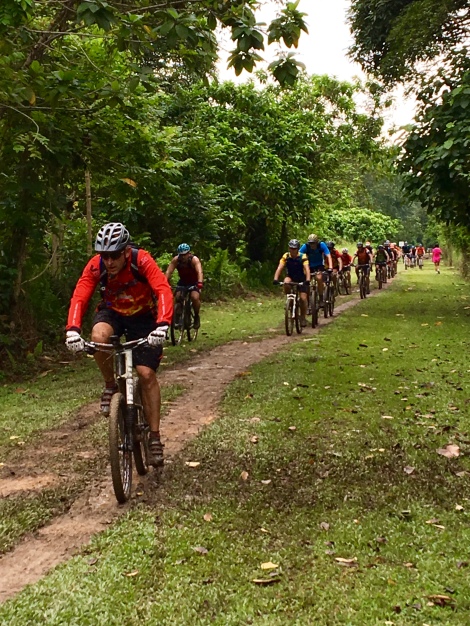 Still, it was nice to be out in the green, trying (unsuccessfully) to spot interesting birds and finding new flowers.

I wish I could read the Chinese on that tiger-in-a-cave, because I would love to know what’s going on here.

The sheer profusion of fruits and veggies at the wet market makes me smile.

If you just glanced at a wet market here, you might think it looked a little like a farmer’s market (thought the wet market is covered and the stalls are permanent).  You can buy the same sorts of things: fruits, veggies, meats.  But the wet market has almost nothing local — everything comes in boxes from places like Malaysia and New Zealand — and you certainly won’t meet any farmers there.  You won’t find cheese or baked goods or homemade jam.  And unless you grew up in Asia, you’ll probably be mystified by a number of the offerings.  I’m finally getting up the courage to start asking what things are (in response to one of my questions today, I got the answer: “That’s a root that local people use in soup.  Want one?  One dollar.”)

So what did I buy at the wet market?  Here’s the list:  three Japanese eggplants, two cucumbers, one little bag of grape tomatoes, one bunch of spinach, one bunch of bok choy, eight onions, six shallots, a handful of garlic, one young ginger root (they differentiate between old and young ginger here), two purple sweet potatoes, two blocks of fresh tofu, one bag of fresh noodles, one bag of star anise, one bag of mushrooms, one mango, eight orchid stems, two lisianthus stems, and one bunch of bananas.  You can’t buy just one or two bananas at the wet market — you have to buy the entire bunch.  They’re small, but still, that’s a lot of bananas.

I also had brunch — pad thai, from a woman who has a menu of just six items at her little Thai stall — at the hawker center upstairs.  My favorite part of every hawker center has to be the fresh juice people, who will make you all sorts of juices for almost free.  I had mango juice this morning.  They’ll do just about anything; they will even juice sugar cane right in front of you — they have these magic machines that smash up the cane and separate the juice from the stalks:

I think the result is pretty awful — it’s too sweet — but I love watching them make it.

As an aside, I would like to note that Singapore is already getting all dolled up for Christmas.  Halloween passed with nary a blip on people’s radar screens — it’s only celebrated by a bunch of Americans in one or two neighborhoods, and the candy display was gone from my store two days before October 31 — but Christmas is all the rage around here.  I find this “work-in-progress” at the ground floor of my building  particularly odd.

3 responses to “Journey to the Wet Market”