It’s a school holiday (Good Friday), so Prescott and I struck out for an adventure on the Singapore Flyer.  Until recently, this was the tallest Ferris wheel in the world, but it’s been beaten out by the High Roller in Las Vegas.  I’ve been on many enjoyable Ferris wheels in my life, even some with enclosed cars, but nothing like this.  Each of the Flyer’s “capsules” can hold up to twenty-eight people.

As you can see, however, the skies were not interested in cooperating with our plans — the first bolt of lightening struck just as we hit the ticket window.  Forced to abandon the Flyer idea, we walked over to the Singapore River.  This gave us a great view of the twin domes of Gardens by the Bay …

… and this unusual view of the Marina Bay Sands Hotel (note that there’s a swimming pool and a bar on the room of that cantilevered part at the top):

We walked somewhat purposelessly along the river, eventually coming to this view: 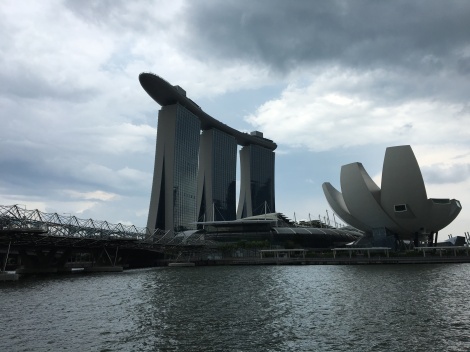 And then we decided to go see what was in The Esplanade.  I hear the term “esplanade” and think of a long walkway by the ocean, but in Singapore, the term often refers to this (side note: I love scale models):

That’s The Esplanade – Theaters by the Bay, a performing arts complex that looks like two durians.  (According to Wikipedia, before the aluminum sunshades were added to the top of each building, critics said that the complex looked like “two copulating aardvarks” — I think that’s more fun than the durians.)  When you look up at the roof from the inside, this is what you see:

And because everything in Singapore has a mascot, The Esplanade has one, too.  I’m guessing this is the world’s only drum-playing durian:

The Esplanade offers all sorts of concerts, but we stopped in because it was about to start raining in earnest and I knew that The Esplanade sometimes plays host to a variety of art exhibits.  Sure enough, we found everything from this oddity (anything with the word “romantic” and “spleen” in the title is odd by default) … 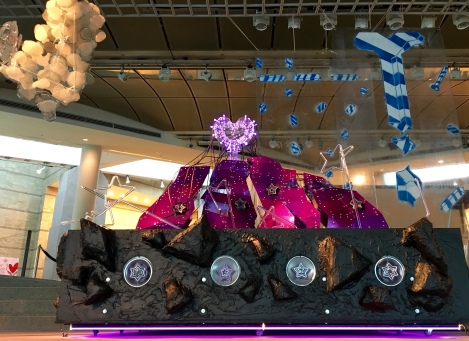 … to these little dudes:

Sadly, the larger arts space was closed because they’re between exhibits, but we’ll both be back soon — I’ll be going to a free festival there next weekend, and Prescott has an improv show at The Esplanade in two weeks.