We have been looking for new places to explore the outdoors, and of Prescott’s colleagues suggested that we visit Windsor Nature Park.  When we arrived on Saturday morning, we realized that we had already been to the exact same area once before.  Fortunately, there were enough trails that we could try something new.

We stared on the Hanguana Trail, which is clearly a new trail, though why they built it remains a mystery — as of right now, it has no clear selling points (aside from the name, which is pretty great).  Still, we did find a common three ring butterfly …

… this cool dragonfly (my dragonfly ID skills are pretty limited) …

… and a leaf that covered my entire body:

We then made our way down the Squirrel Trail and the Drongo Trail (though we saw no squirrels or drongos).  As with many trails in Singapore, between the walkways and the crowds, you never really feel like you’re getting away from it all.  But it’s great to be outside. 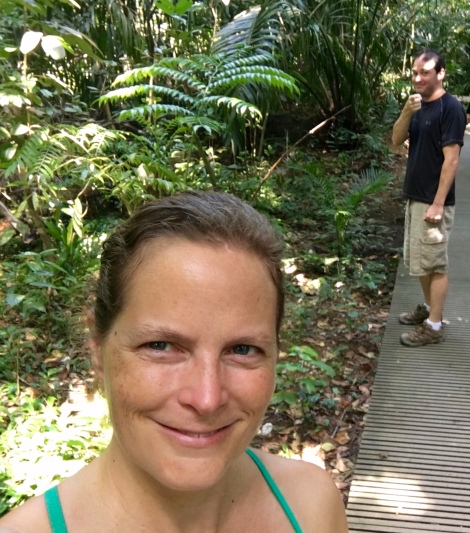 Eventually, Windsor Nature Park bumps up against the Central Catchment Reserve and MacRitchie Reservoir Park.  We took the MacRitchie Nature Trail and then a very long, windy boardwalk trail south along the reservoir.

These tiny flowers, which I found by the water’s edge, were new to me: 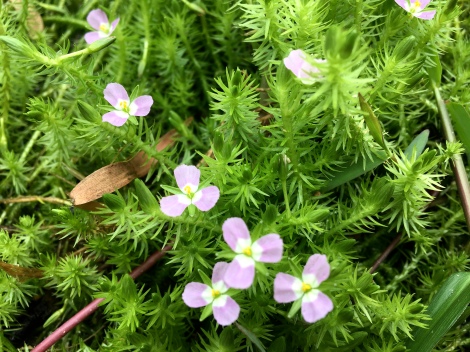 I was, as always, extremely excited to find monkeys along the way.  It’s amazing to me that most hikers in Singapore just walk by monkeys without stopping.  I, on the other hand, could watch monkeys for hours.  Here’s a tiny baby — it was so young that it never strayed far from its mother:

Prescott enjoyed monkey time in his own way: 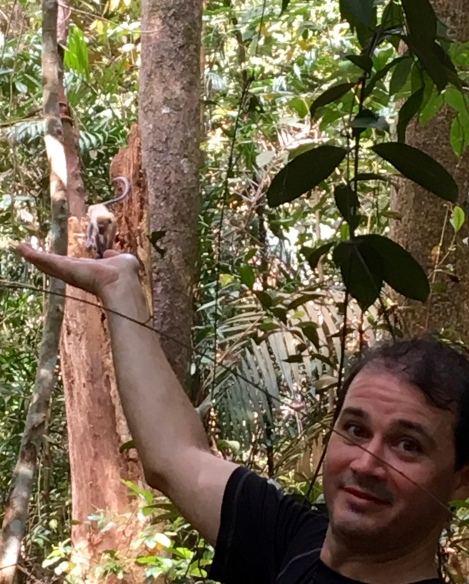 The long-tailed macaques at MacRitchie are famously used to humans (and even more famously used to stealing human food whenever they’re given the opportunity).  So it was easy for us to sit pretty close to them without their appearing to be bothered.

When we finished our hike, we walked half a mile to the flower shops of Upper Thompson Road, where we went to Ji Mei’s giant cut flower warehouse to buy a gift for a friend’s birthday.  It’s been incredibly hot in Singapore for the past week, so it felt really good to be in a giant refrigerator for a little while.

Prescott’s level of interest in flower shopping was not quite as high as mine: 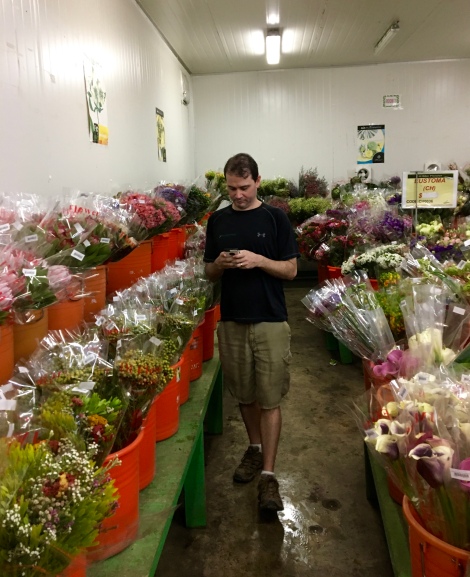 Later in the afternoon, I went and had my first proper bubble tea.  For the uninitiated, this is sweet tea, often with juice or milk mixed in, with tapioca pearls at the bottom.  You wait in really long lines for it and then drink the pearls through a super-fat straw.  The kids at Singapore American School are obsessed with bubble tea — someone seems to be having it delivered to campus just about every day — so I thought I would see what all the fuss was about.  On my advisees’ recommendation, I went to Each a Cup and ordered an earl grey milk tea, 50% sugar, with large pearls.

My conclusion is that bubble tea is yummy — it’s like a very milky chai — but that it would be better without the bubbles.

I’ll close with this strange sign that we passed by last night.  I’ve tried looking it up, but I’m still not sure what “scruping” is.