Not surprisingly for a densely-packed island with well over five million people, there’s a lot to do at night in Singapore.  Unless Prescott is out at improv practice, our weeknights tend to be predictable — a little cooking, a trip to the gym and pool downstairs, an episode of Brooklyn Nine-Nine or The Unbreakable Kimmy Schmidt.  But on the weekends, we usually head downtown for some form of entertainment or another.

People love to go out to eat in Singapore, and we’re no exception.  This evening we went to Si Wei Mao Cai, a Szechuan restaurant in Chinatown, with Everett and Anna.  We’d been warned — with no small amount of glee — that this place was famous for piling on the peppers.  And that was no exaggeration.  Here’s what our chili pepper fish looked like: 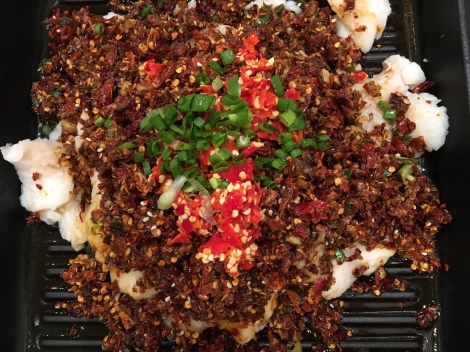 There’s fish in there (and some noodles, too), but the overwhelming effect is one of heat.  Anna and Everett’s chicken dish was equally scary looking: 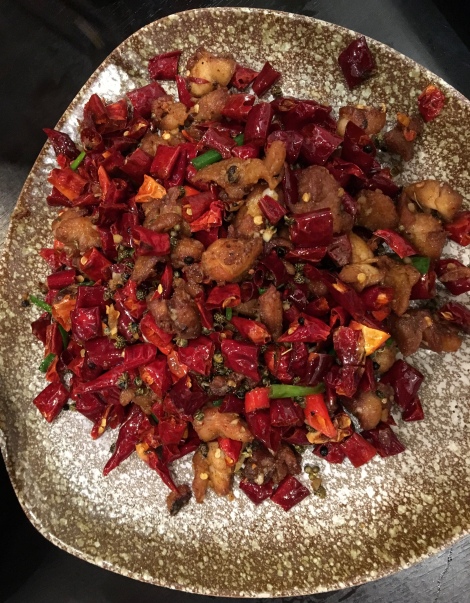 But we all dug in happily and had an outstanding meal.  Everett ate most of the peppers! 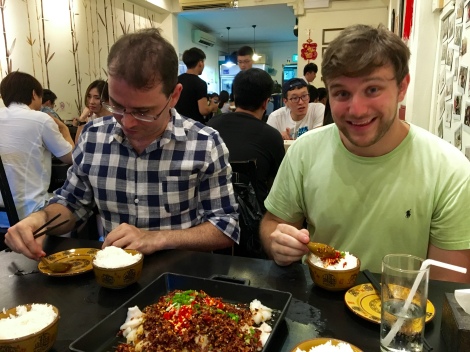 I also like going to the movies in Singapore, though the theaters here have taken some getting used to.  Here are some of their very non-US features:

Then there’s improv.  Prescott usually performs on Thursday nights, which keeps him out far too late on a school night (we’re usually up and out the door for the bus in the morning by 6:15).  But he has a show on a Saturday this week, which meant that I got to go.  He was performing in “One of Us is Drunk,” a concept of Prescott’s invention in which one performer has a lot to drink beforehand and the audience gets to guess who’s drunk.

Prescott was the drunk person last night, but fortunately, he didn’t fall off of any of the furniture (for whatever reason, Prescott is forever climbing furniture in improv shows).  If you want to get a sense of who’s doing improv in Singapore, here’ s a picture of both of the casts (of One of Us is Drunk and The Modern Schemers) from last night: 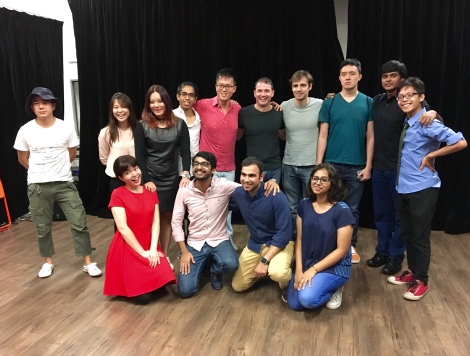 On rare occasions, I will try to search out a classical music concert.  I found one last Sunday night; members of the Singapore Symphony Orchestra and some visiting musicians were playing small pieces (such as the Spring Sonata) from Beethoven’s “Heroic Years.”  This took place in the Victoria Theatre and Concert Hall, a beautiful space:

The building started its life in 1862 as a small town hall; it was later renovated and re-renovated to eventually become two major performing spaces.  A statue of Sir Stamford Raffles, the British “founder” of Singapore, stands out front:

As I’ve noted, Singapore is pretty proud of its colonizing father.  The plaque on this particular statue reads:  “This tablet to the memory of Sir Stamford Raffles, to whose foresight and genius Singapore owes its existence and prosperity.”

The concert hall is lovely and intimate, if surprisingly small: 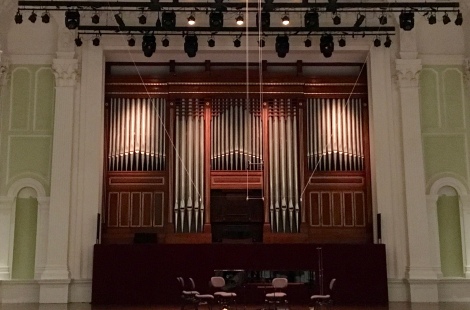 Of course, there are some weekend nights when I just want to curl up with a book.  Here are some recent good reads: