For my birthday last weekend, Prescott took me to the Jiak Pa Lang Eating House for a special lunch.  The chef had designed a five-course meal in conjunction with a dancer, so each course was preceded by a choreographed routine designed to match the food.  The meal had a theme: the first course started a hundred years in the future, and then each course brought us closer to the present.

It’s no surprise that we started out being served by a robot:

This generally freaked me out, because for the most part I don’t like masks.  Still, I was fascinated by the dancer’s precision in following the lines on the floor.

For our second course, we were served traditional Singaporean laksa (a kind of spicy noodle soup) in “Campbelle’s” soup container:

The premise was (I’m assuming) that traditional Singaporean foods will be taken over by giant food conglomerates down the road.

And then we were served an unfinished bak chang along with a slip of paper that asked, “what happens when machines replace us?”

I’ve tried filling banana leaves with rice, so I understand how complicated and time consuming it is — and why this particular Singaporean tradition is not being handed down to the younger generations.

Other dance pieces looked at the relationships between families and meals and food, between older (traditional, non-English speaking) generations in Singapore and their grandchildren, and between work and food (and the fact that we often end up eating alone).  Dessert was a deconstructed Singaporean tau huay, a soybean curd pudding served in a light sugary syrup.  We were presented the pudding alone first…

… and were then offered the syrup with a slotted spoon that bore this question: 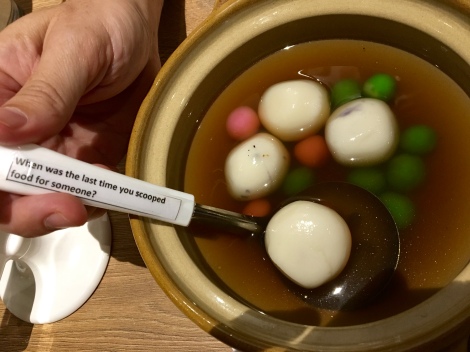 Eventually we received a second, normal spoon — with a new question — to complete the course: 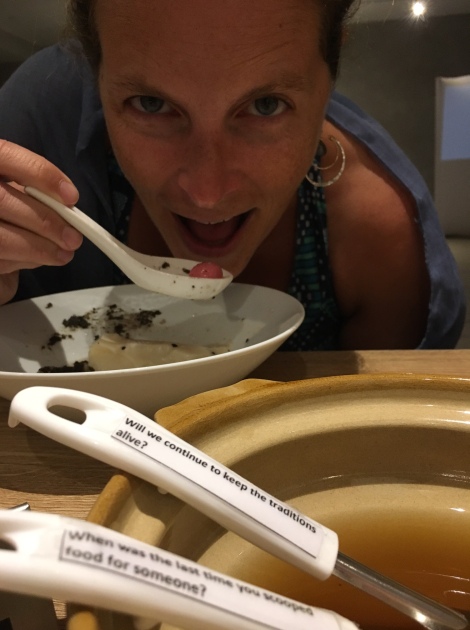 It was an interesting experience with some great food and few very moving dance pieces — but Prescott and I both left feeling like we’d wanted an even more immersive audience experience.

On an entirely unrelated note, I thought I would introduce everyone to Singapore’s new “you should have a baby” campaign.  Concerned about Singapore’s declining birth rate, and hoping to grow by another half million people or so in the next fifty years, the government of Singapore has launched a public service campaign to encourage young couples to be fruitful and multiply.  The first evidence I saw of this was a few months ago at the movies, where they had a pre-show ad about how nice it is to have children.

Now the I Love Children organization (“a welfare organization with the purpose of keeping Singapore young,” according to their website) has stepped in and upped the game with these signs in the MRT (our subway):

So they don’t just want people to have babies — they want them to have them now: 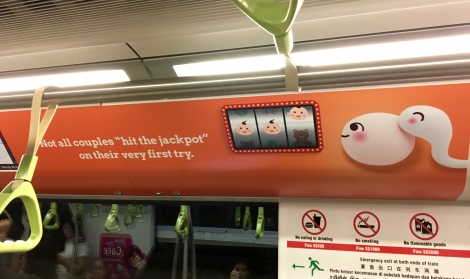