I had a conference in Portland, Oregon, three weeks ago. It was great to be back in the land of wide open spaces, farm-to-table restaurants, and family! My sister Jocelyn, whom I miss terribly, came out to meet me for a weekend. We started our journey out just right with a lunch at Tasty n Alder, a Portland staple, where I happily enjoyed a lunch of fresh greens, a biscuit, and a cauliflower frittata. Yum!

After puttering in the enormous Powell’s Books for a little while, we headed out to the Columbia River Gorge, where it was cold and rainy. We stayed in an Airbnb place in a National Scenic Area that would probably have been stunning in a blue-sky summer. 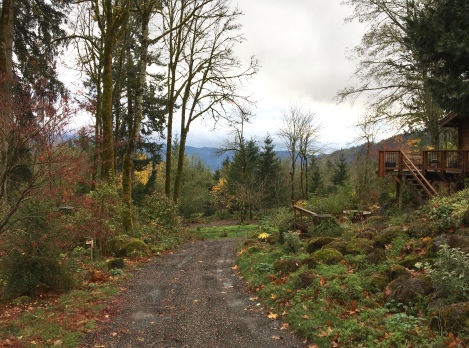 We were so chilly and tired — and the roads were so dark and damp — that we decided to stay in and share about twelve almonds, four prunes, and a pineapple cake from Singapore for dinner:

Our gas fireplace was broken, which meant that we had very little in the way of heat. Thank goodness for hot tubs! We enjoyed long soaks that helped keep the chill at bay.

The Airbnb was owned by a gentleman who does an incredible amount of gardening — there are plants and paths and trails and strange doorways all over the property.

Not much blooms in November in the Gorge, but we managed to find some flowers:

We spent an entire day exploring the Gorge. 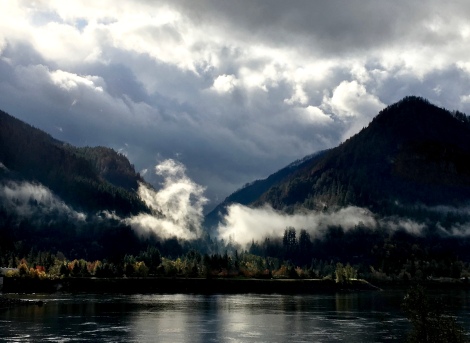 We drove to the Bonneville Dam to see the fish ladders…

…though there were no fish to be seen from the viewing platform (fall is not the right season to view salmon travel). We did find a few — and J tried to ID them — at the indoor viewing windows.

We also got to see the generators/turbines (I’m not sure what the proper terminology is for them) that run the dam:

We then drove to Hood River, which is a windsurfing and kitesurfing mecca. A windsurfer for many years, J was excited to see the place, though it was too rainy and not windy enough for anyone to be out on the water. Instead, we had a nice lunch and then ventured forth to see part of the Fruit Loop: a long drive that leads through the orchards of Hood River County.

The area between Mount Hood and the Columbia River has been a pear and apple farming region for well over a century.

Some of the buildings look like they belong in black and white (note the stairs to the door on the second floor).

Jocelyn and I may or may not have trespassed onto an orchard to glean some late-season drops (if you look carefully, you’ll see a spot of red — that’s J making her way between the pear trees). 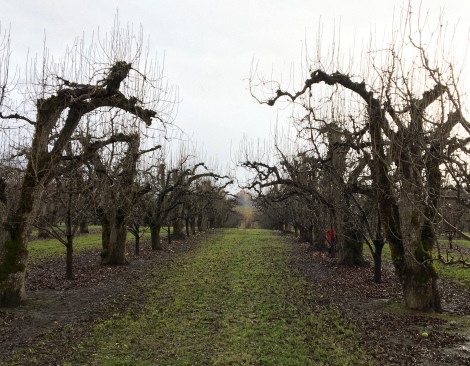 We had a few great pears for snacking! 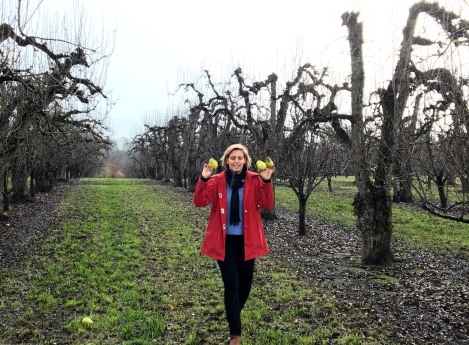 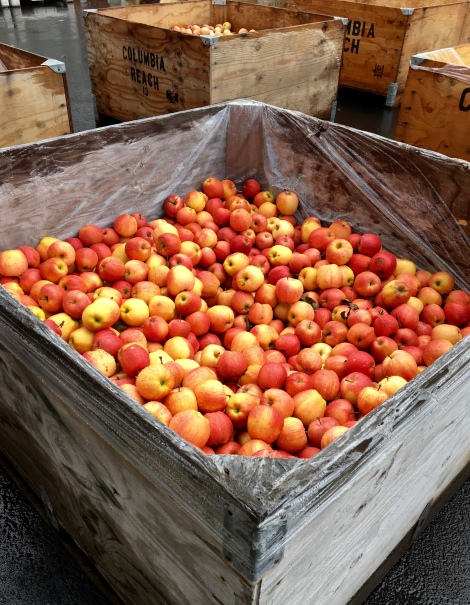 We had pretty bad cider…

… found a beautiful rainbow over a vineyard …

… and had an encounter with the Bonneville Bigfoot!

This very, very strange statue can be found at the Bonneville Fish Hatchery, where you can see little tiny fish waiting to grow up to be released as much larger fish. I have no earthly idea why Bigfoot is there. But you can also see lovely gardens and large sturgeons: 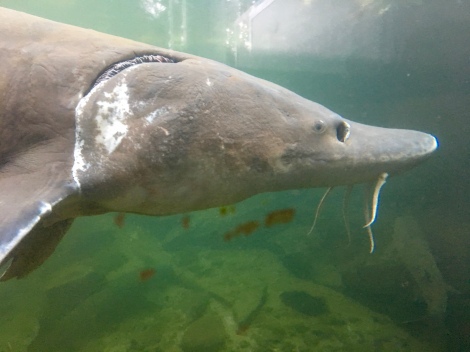 The Columbia River Gorge is famous for its waterfalls, but there was a huge fire in the Gorge earlier this fall that consumed much of the forest all around the trails. So it is impossible to access any of the usual viewing points (not only are they roped off, but there are guys stationed in cars at every possible access point to make sure you don’t enter). We made do with making every other possible stop we could to take in the landscape. 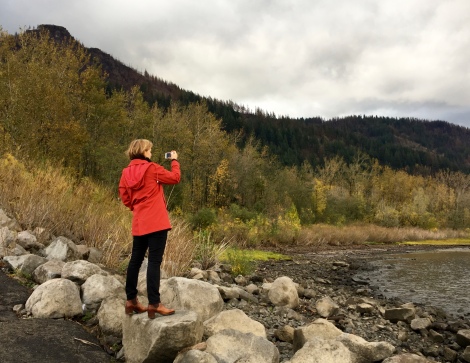 This included a drive up to the clumsily-named but rewarding Portland Women’s Forum State Scenic Viewpoint: 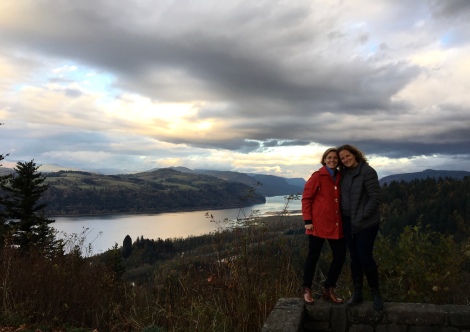 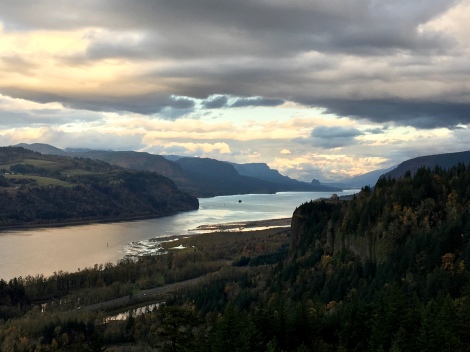 We ended our Gorge exploration with a stop in Troutville, a town that has a very cute main street… 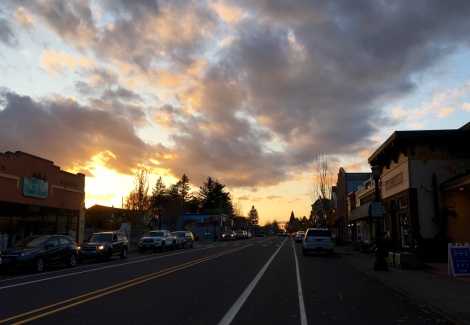 … which boasts a number of large bronze statues… 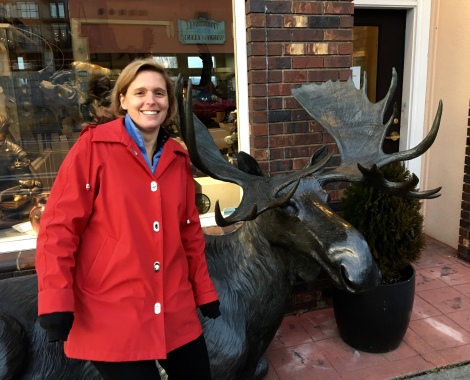 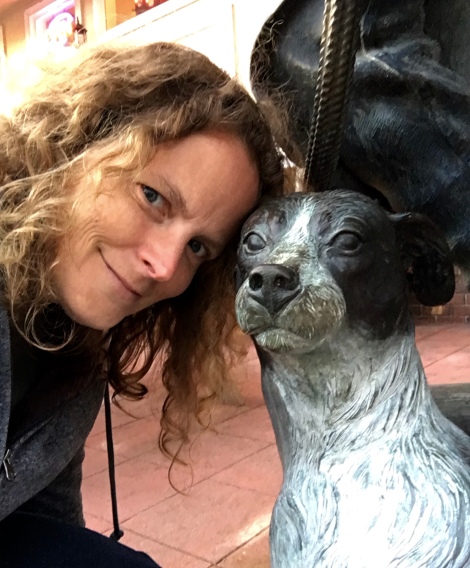 … and a store that’s more than ready for Christmas!

Other than this outing, Jocelyn and I spent a good deal of time searching out great Portland restaurants. In addition to the aforementioned Tasty n Alder, we enjoyed Tasty n Sons (the bacon-wrapped dates are perfection, and the biscuits with blueberry compote are like eating heaven), Park Kitchen (the savory-sweet sorrel panna cotta was like nothing we’d ever had before), and Wailua Shave Ice! 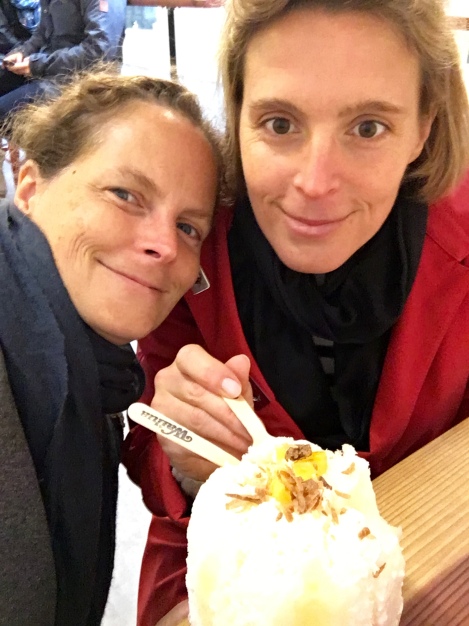