For our last morning in Vietnam, Dad, Prescott, and I headed out to My Son Sanctuary, a collection of Hindu temples built between the 4th and 13th centuries by the rulers of the Cham Dynasty. This temple complex lies about an hour’s cab ride outside of present-day Hoi An. We found one sign offering rides to the “Hollyland”:

When you leave Hoi An, the bustle of urban life gives way quickly to rural landscapes. Here, a large cemetery appeared to spring up right out of the rice paddies:

Once we arrived at My Son itself, we were immediately confronted with rules about “civilized tourism manners.” We especially liked rule # 6:

Dedicated mostly to Shiva, the collection of temples at My Son is often compared in historical importance to places like Angkor Wat in Cambodia and Boroburur in Indonesia. It is now a UNESCO World Heritage center. You can see why: 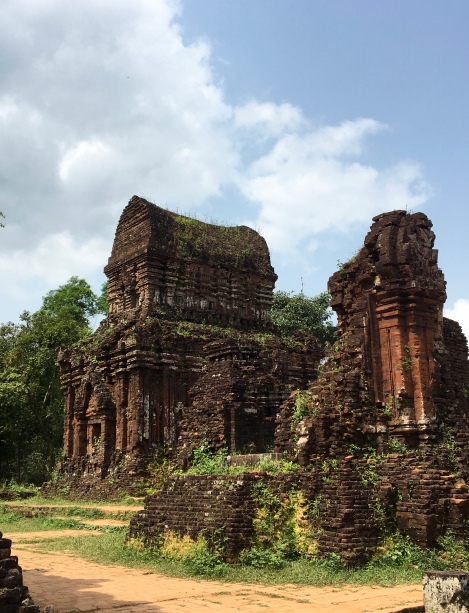 Unfortunately, virtually all of the temples now lie in various states of ruin, thanks in large part to a single week of carpet bombing by the US in August 1969. It’s the first place I’ve ever visited with term “bomb hole” as a designation on the tourist maps:

And indeed, as we walked around, we came across several large craters in the earth. It was a sobering reminder of the destruction that the Vietnam War brought to this region. And more dangerous remnants of the war live on: the tour books all remind you to stick to the paths at My Son so that you don’t stumble on an unexploded land mine.

But Vietnam is rebuilding in every way, and you’ll find vigorous construction efforts — and attempts to keep the remaining structures standing — going on at a number of the temples: 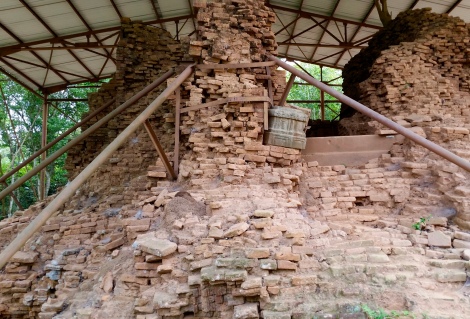 You can see evidence of the restoration efforts all over, where old bricks have been laid — without mortar, following the original construction techniques — alongside new ones:

We walked around for a little over an hour. 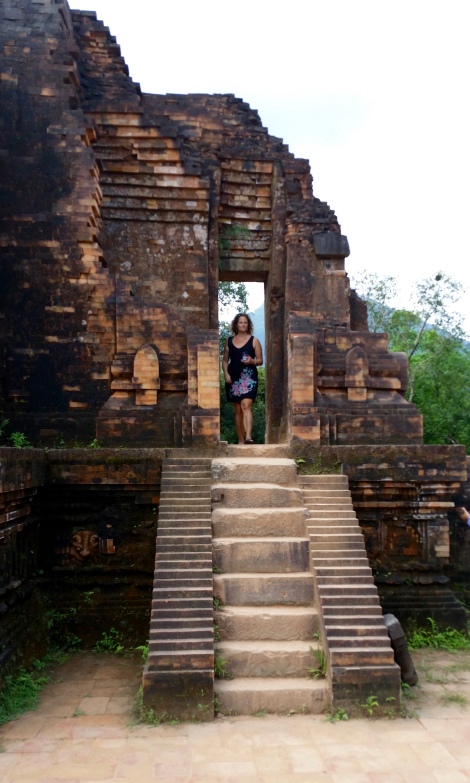 In retrospect, I wish we’d had much more time — there was more to see than I’d been led to expect. I had read mixed reviews of My Son, but we really enjoyed our time there.

We arrived fairly early in the morning, shortly after 9:00. This turned out to be good timing, because (a) it’s quieter in the morning and (2) nearly all of the other tourists were at a musical performance that takes place every morning in a pavilion on site. So we had the place nearly to ourselves for a while. 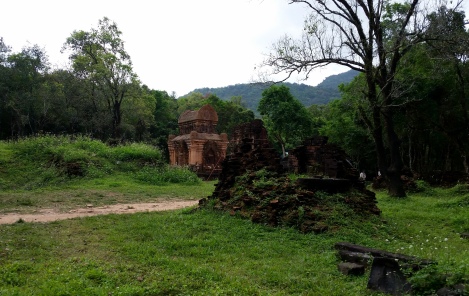 Then the performance ended …

… and there were tourists everywhere:

It’s an impressive site nonetheless, especially at the central group of temples. 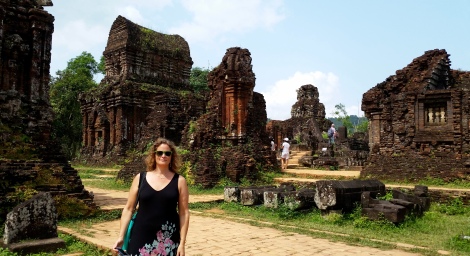 There’s not much imagery at these temples — most of it has been destroyed, either by age or by bombs — but I did find little carvings here and there:

I am sorry that we did not make time for the My Son Museum (I didn’t know one even existed when I made our plans), because I think I would have found more carvings there. And we all wanted more information about what the site looked like when the French explored it in the pre-1969 twentieth century.

The museum sits just next to the parking lot, which is a short tram ride away from the temple sites. I had fun riding with the wind at my back on our return tram trip: