Yes, Singapore has a museum of corruption, as do Thailand and the Ukraine (I’ve also read that they have one that will focus on political corruption planned for Albany, New York, which seems entirely fitting). Singapore’s museum is called the Corruption Reporting Heritage Centre:

This tiny building actually serves a dual purpose: you can learn about Singapore’s anti-corruption campaigns, but you can also report suspected corruption in your workplace or government. They have a machine right outside the door that will allow you to register a corruption complaint without ever walking inside. And inside, they’ll teach you (in inadequate detail, to my mind) about what happens once you have filed a concern:

Clamping down on corruption was a major initiative for Singapore’s fearless leader, Prime Minister Lee Kuan Yew, who wanted to make Singapore an Asian country that would be safe for and attractive to foreign companies. He made tougher laws, gave the anti-corruption bureau its own new office space, transferred oversight of the bureau to his own office, and encouraged public watchfulness:

The museum itself is tidy and about the size of our apartment (900 square feet, give or take a bit). A screen that purports to teach you about the history of corruption control in Singapore teaches you that the Corruption Practices Investigation Bureau, one of the oldest anti-corruption organizations in the world, was founded by the Brits in 1952. Unfortunately, the history display is like a giant web page — it’s just a lot of picking from a bunch of options on a screen and then reading whatever comes up. The history pages offer a bunch of “fun facts” that aren’t necessarily fun or historical. But I did like that one of the bureau’s initial emblems was eventually discarded because it looked too much like the logo of a local biscuit company.

The whole museum is dominated by screens — lots and lots of them. 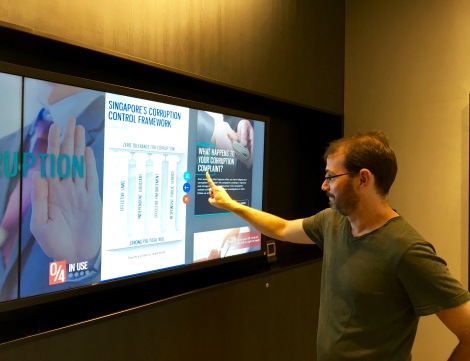 I found most of these “exhibits” painfully vague, but I did appreciate the maps that show corruption around the world …

… and that let you know in large letters that Singapore is the sixth-least corrupt place you can be (clearly we have to figure out what New Zealand is doing right, but we’re about ten thousand light years ahead of Malaysia).

The museum has a very long “game” that you can play (also on screens), which gives you five suspects and requires you to guess who engaged in corrupt business practices. Maybe a ten-year-old would like it, but I’d be surprised — it doesn’t move very fast. 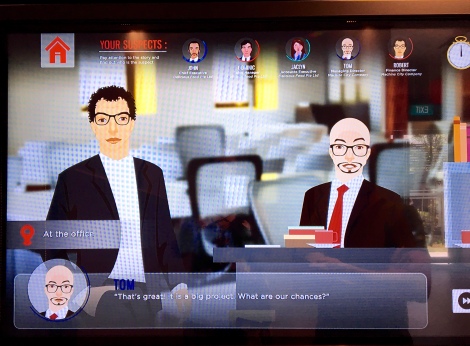 My disappointment at the museum’s blandness turned around when we got to the second room. Here, they have actual artifacts from past Singapore corruption cases, like these lottery balls that were rigged to win. 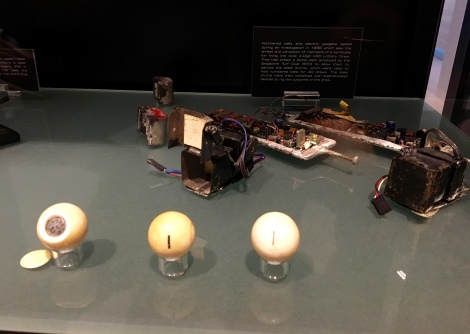 We spent most of our time at the screens that allowed us to read about various acts of corruption, ranging from business ventures to gaming syndicates … 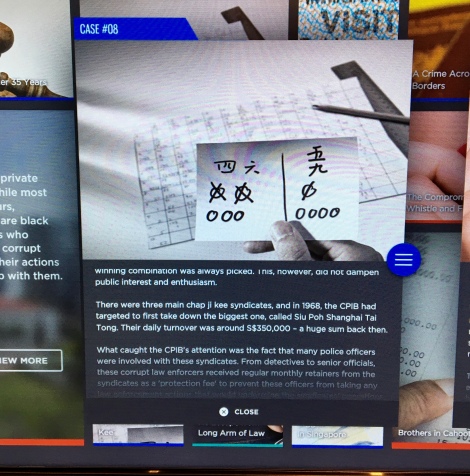 I would not return to this museum, nor would I jump to recommend it to anyone. But I’m glad I went, if only to satisfy my intense curiosity about what might be inside.

One response to “Crooks and Kickbacks”