I’ve just wrapped up a visit to my 50th state: Oklahoma! This was a monumentous adventure for me — I’ve been trying to cross Oklahoma off my list for years — so much so that I actually took a picture at the welcome rest stop: 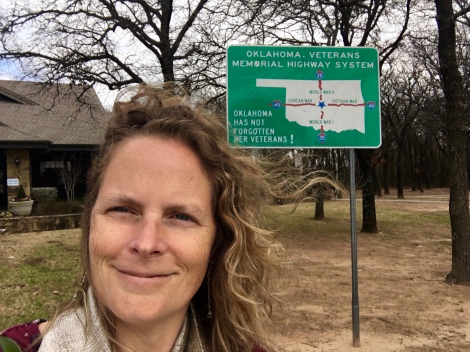 Here’s what I know about Oklahoma in January: It’s cold. It’s brown. And they’re not kidding when they say that this is “where the wind comes sweepin’ down the plain” — my hair was pretty much in this state of disarray for the entire twenty-four hours of my visit.

When you’re driving north into central Oklahoma from Texas, you don’t see a whole lot. But I was pleasantly surprised by what I found at the University of Oklahoma:

When Frank Lloyd Wright visited the University of Oklahoma campus in the 1950s, he coined the term “Cherokee Gothic” to describe buildings like this one. I don’t know whether he meant that as a compliment or not, but I was impressed.

If you happen to find yourself in Norman, Oklahoma (no easy feat — I’ve been thinking about getting there without any success for year), you should probably prioritize seeing a UO football game. This place is football crazy.  Things to do thin out pretty quickly after this, though you can (1) visit a natural history museum, (2) place a few bets at the local casino, or (3) take a tour of the National Weather Center (if you’ve booked in advance). I did none of these, though I wish I’d known about the last one before I made the drive north.

Instead, I had a delicious cocktail (try the Whiskey Business) and kale & brussels sprouts salad at Scratch Kitchen and enjoyed an afternoon at the Fred Jones Jr. Museum of Art.

Kenneth Miller Adam, The Valley — one of my favorite pieces in the collection

Even the architectural renderings seem to be dwarfed by the sky:

You can get a good sense here of how white painters have seen themselves situated in the West, whether it be on a wide western street (you might almost be on a movie set) …

… out racing to beat the sunset in a stagecoach …

… or as the companion of an elegant western Gibson Girl:

This museum also offers a place to learn about the many ways in which Native Americans have been seen by white painters over the years. There are, of course, Native Americans fighting whites (with the white man losing in this painting, which seems like a breath of fresh air in the face of the broader historical context) …

W. Herbert Dunton, The Custer Battle (note Custer in the back right) 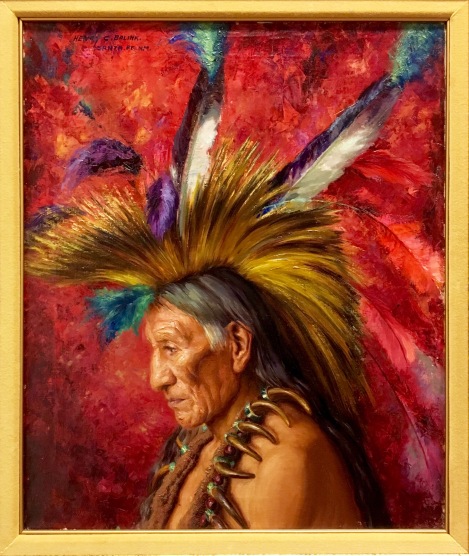 … and the Native American as enchanted and ethereal, blending seamlessly into nature: 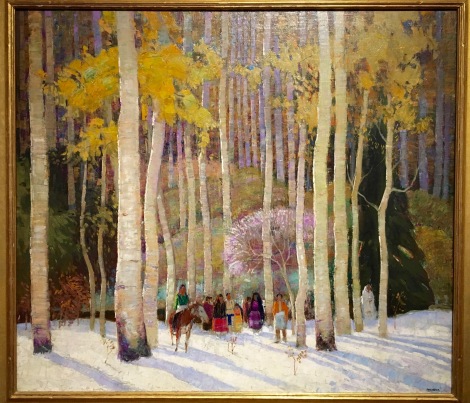 But there were also white artists who just painted Native Americans going about their business in everyday clothes: 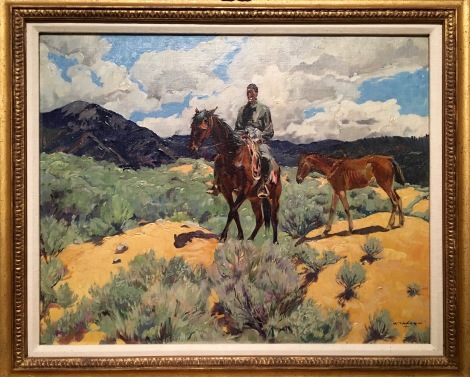 More than anything, I was fascinated by the paintings that offered portrayals of Native American rituals (though I did wonder how true to life they might be). These included the fertility and thanksgiving prayer known as the Thunder Dance (also known as the Pinon Dance or, to my surprise and puzzlement, the Watermelon Dance) … 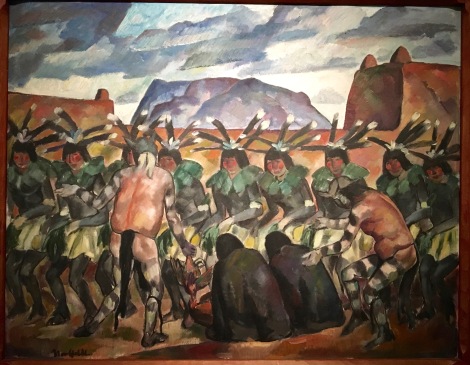 … the Pueblo de San Ildefonso Prayer for the Hunt … 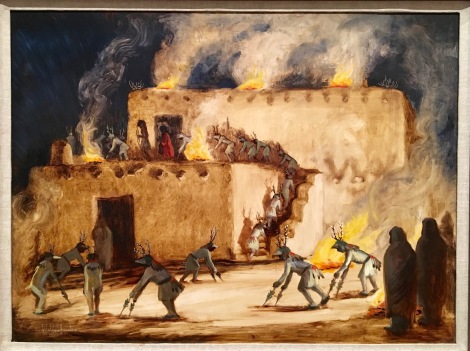 … and the Taos tribe’s annual pilgrimage to the sacred Blue Lake: 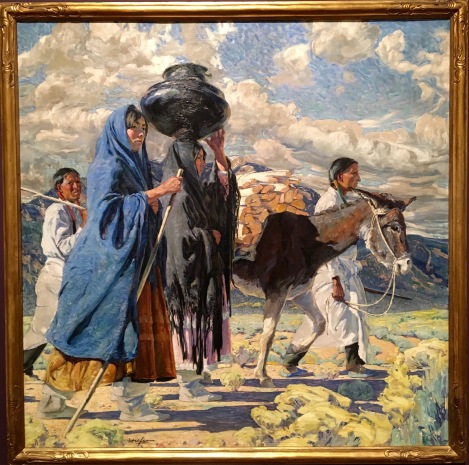 You can also see the many different ways in which Native American artists have portrayed their own mythologies and imaginings:

Robert Montoya’s Arrival at the Most Sacred Place (Sandia Pueblo) 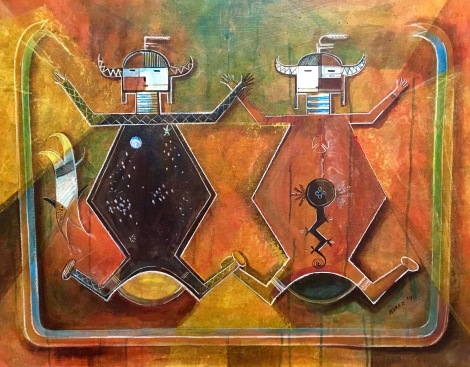 The ceramics collection offers an excellent look at a range of works of different southwestern Native American tribes, from Zia … 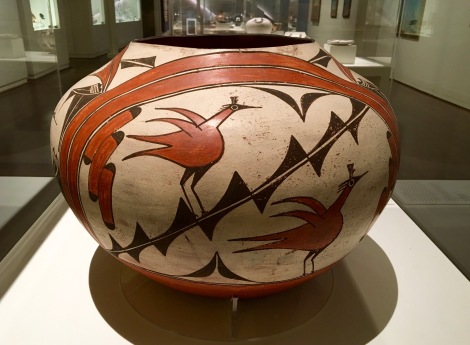 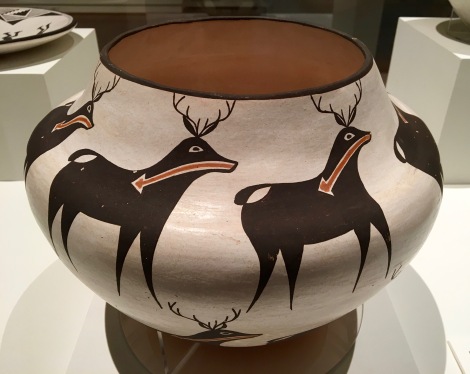 Hispanic artists are represented here, too, albeit in much smaller doses. But you can see this 1930s geranium by Pedro Cervantez (who worked as a muralist for the WPA) …

… and this 1970s painting by Luis Jimenez (the museum invites you to view it both as a whole and as two entirely separate panels, which is fascinating):

This museum also boasts a much smaller collection of what many museum-goers might consider traditional western art (“western” taking on a much different meaning here), which includes artists like Georgia O’Keefe … 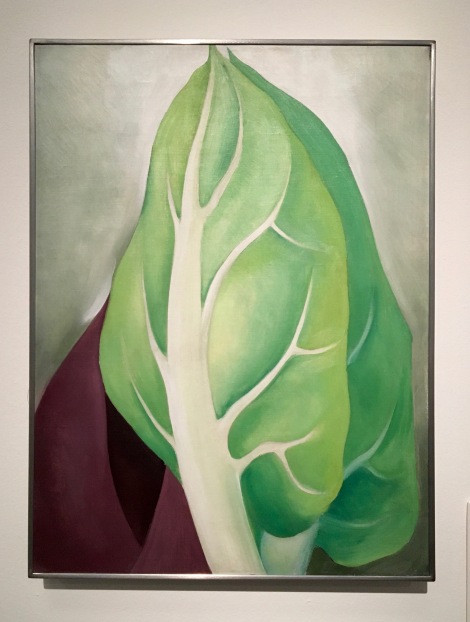 Cos Cob (this is a picture of skunk cabbage)

Entrance to the Grand Canal, Venice

And if you’ve ever wondered, “what would it be like to have a Degas and a Monet in my living room,” look no further. The Aaron M. and Clara Weitzenhoffer rooms show you what this oil barons’ ceramics, furniture, and impressionist art collection might have looked like in situ: 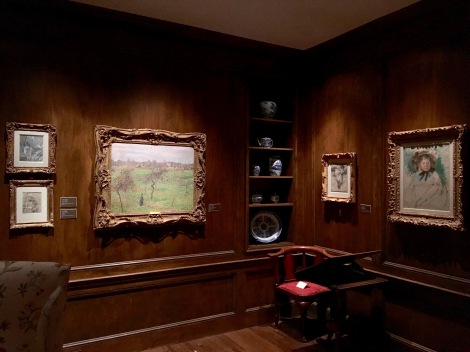 Here you can wander three paneled rooms and admire works by Corot, Renoir (above), Pissarro (also above), Signac … 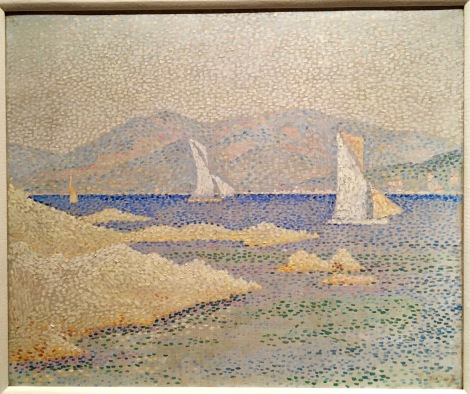 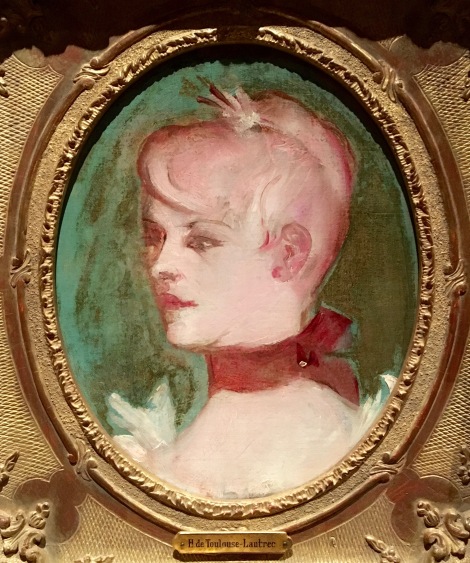 Still wishing there were more to see? Don’t worry — there’s plenty. But once you’ve hit on this red-eyed fiberglass mustang, you might feel like you’re done for the day: