In 1869, officials began planning a rail line that would take goods from Singapore’s rich southern port and bring back valuable natural resources like tin and rubber in return. The island’s first railway station opened in 1903, and by 1923, trains could run cargo all the way up the Malay peninsula. But the trains stopped running in 2011, and now all that’s left of the North-South Line is empty track. 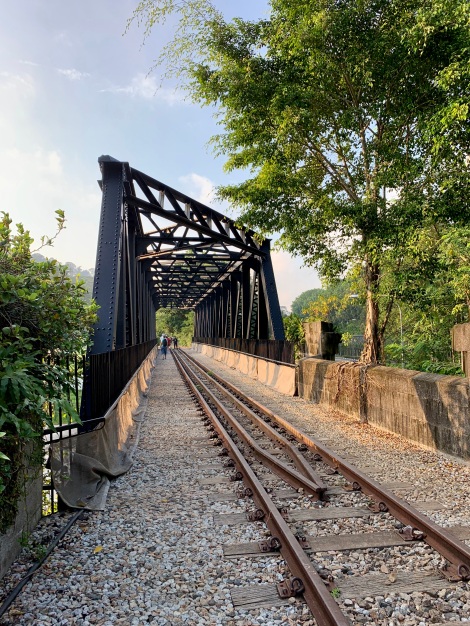 Fortunately, Singapore is working on developing a Rail Corridor, and you can now walk the central length of the rail line. We started Hillview (pictured above) and wended our way down to Holland Village. I really like the top of the trail, which feels very natural and quiet. 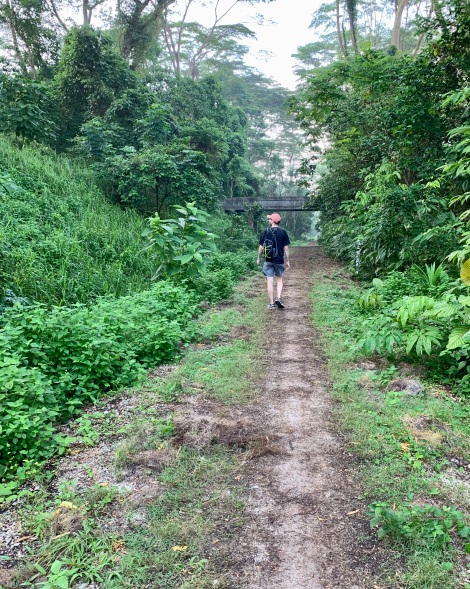 But concrete slabs lining the ground as you approach the Quarry Bridge indicate imminent trail development (the government says this will become a “rainforest experience”): 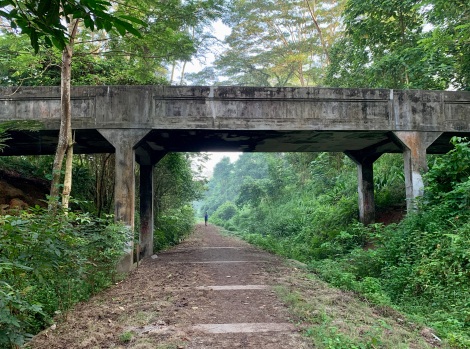 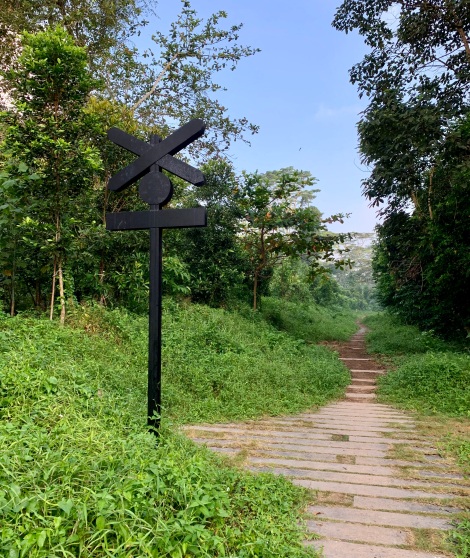 … there are still some lovely wild sections: 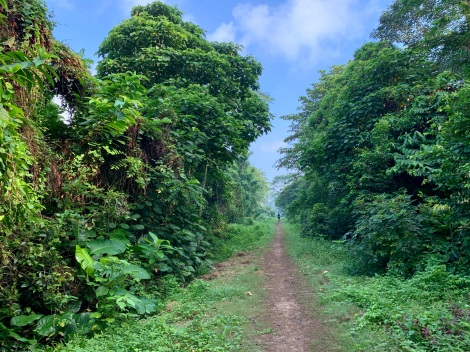 Trail improvement works are in hiatus now (#COVID), so some of the new additions are becoming overgrown. I should also say that it’s not entirely clear that the trail is truly open to the public at the moment. As you walk down its length, you encounter lots of fencing blocking the path: 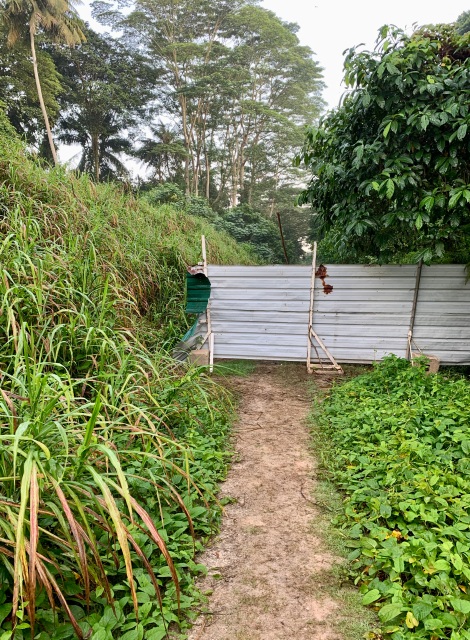 But as you can see on the left in the photo above, plenty of people have worked their way around these barriers. Such incursions into prohibited space feel distinctly non-Singaporean, as does this tree in the middle of the trail (the government is usually really good about tidying up things like this): 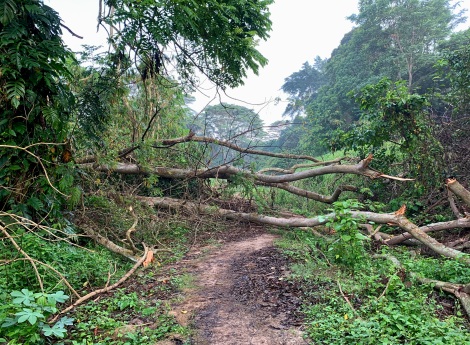 All of that said, we found the trail quite easy to walk. Once we reached Beauty World, we came across a few old railroad ties … 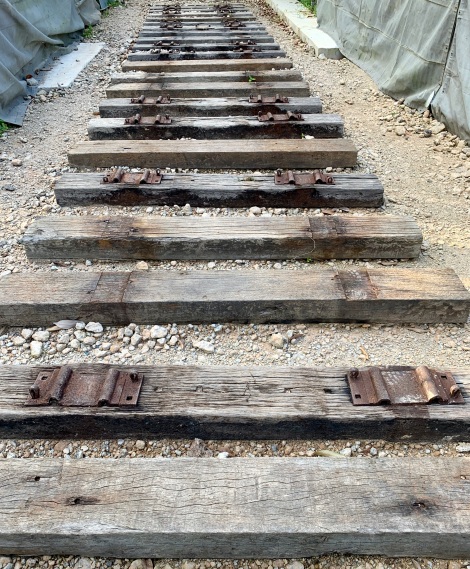 … and then the trail turned into a full-blown walking path … 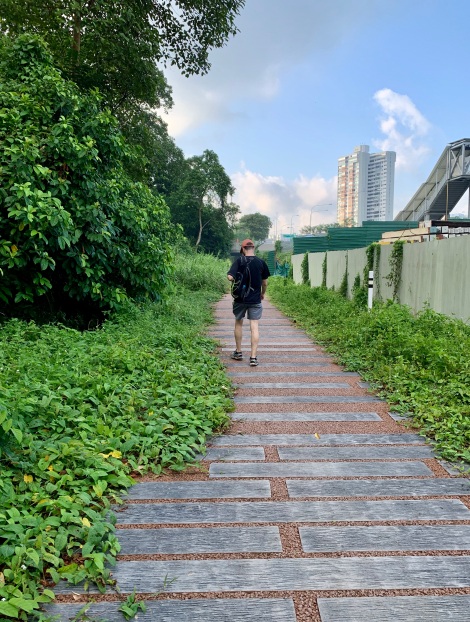 … that continued to grow ever-wider 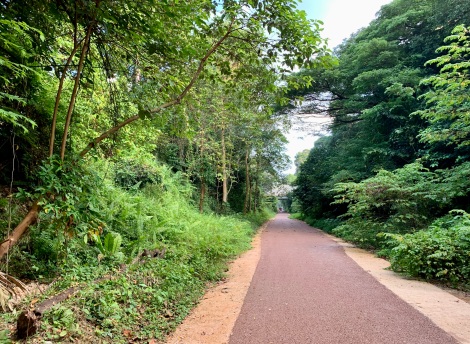 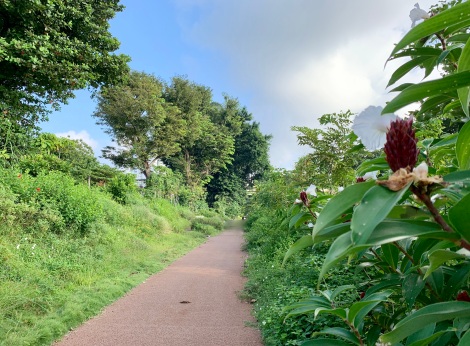 … which has been planted with fruit trees, butterfly attractors, and other flowers: 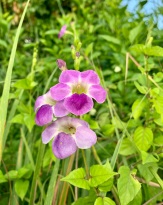 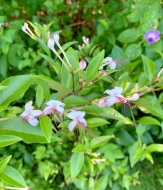 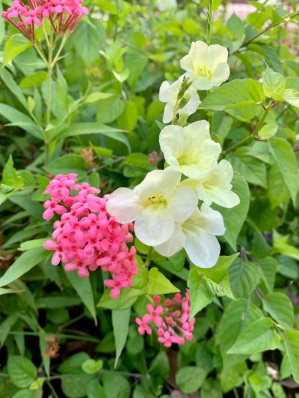 As we approached King Albert Park, we came to the second truss bridge of the walk: 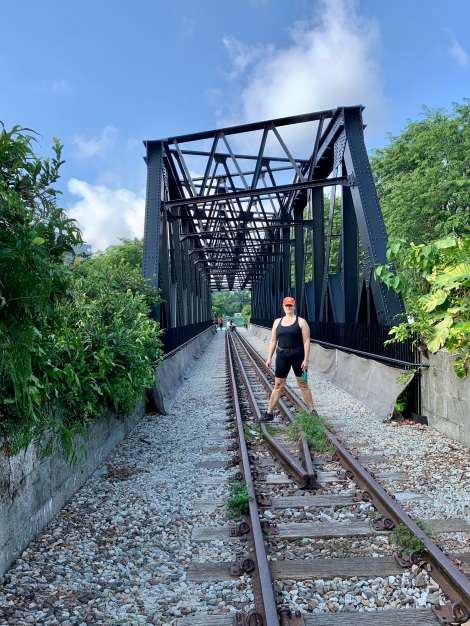 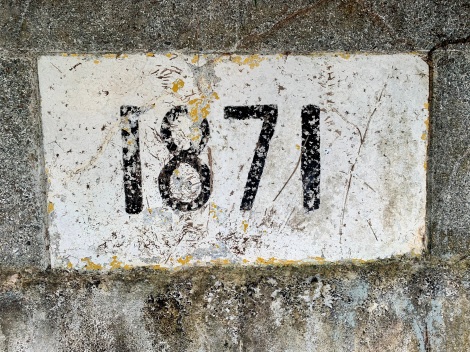 Just beyond this stand the dilapidated remains of Bukit Timah Railway Station: 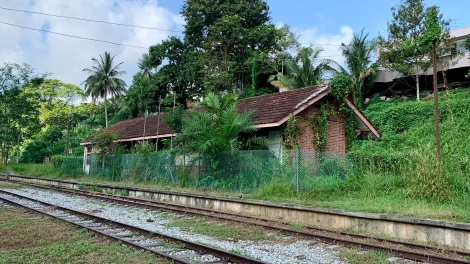 Built in 1932, this was a passenger station for just a few short years. In 1940, this became a passing loop station, and in the mid-1960s, it developed into a freight interchange. Now Singapore’s National Parks service has a plan for improving the building and the surrounding area (it’ll be the “Bukit Timah Railway Station experience”), but right now, the place seems a bit forlorn.

Continuing south, the trail opens up and begins to feel much more like a proper walking and biking path: 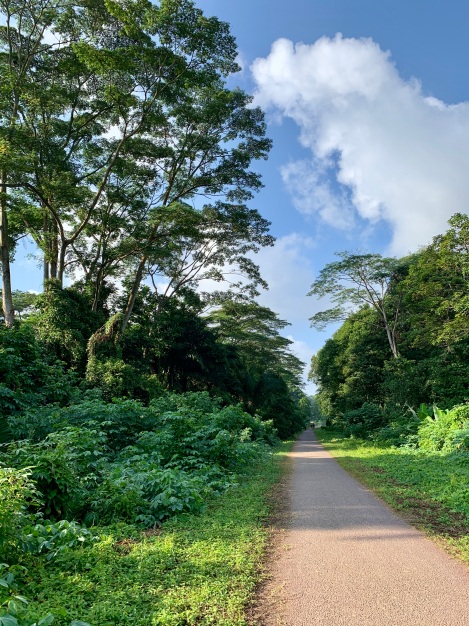 I loved some of the trees in this section: 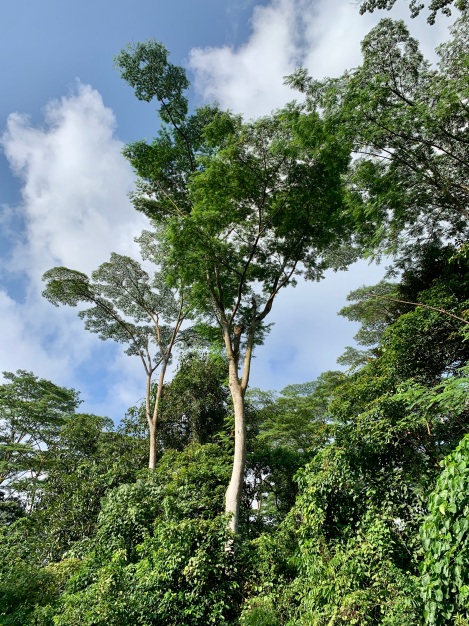 Unfortunately, the trail ends abruptly and without warning just south of Holland Road — you come to a big fence (we couldn’t find a way around this one) and water pipeline construction. Here’s the full-length mirror where workers can check to see if they’re properly outfitted: 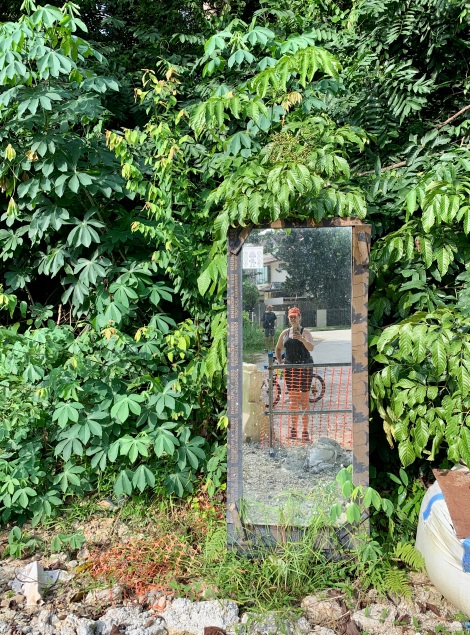 Eventually, we might see the rail trail developed south of here, though the NParks website doesn’t offer any dates or plans for this. As for what lies north of Hillview, there’s no official rail corridor, but I did walk a good stretch of what once used to be the old rail line all the way to Kranji a few months ago.

If you walk the rail line, it’s worth hopping off the trail in Hillview to eat at any of number of great restaurants at Rail Mall (try the mango lassi and prata at Springleaf Prata, the green tea thunder rice at Sunny Choice, or the pizza at Acqua e Farina). There are also some wonderful murals depicting life on and near the rail line. This one shows the train on its final run of the North-South line in 2011: 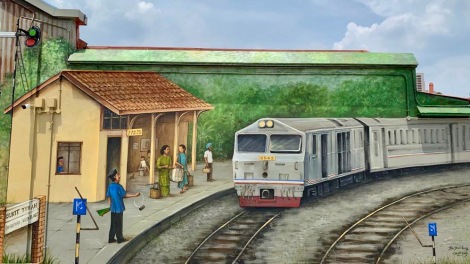 Next to this, mural artist Yip Yew Chong has painted a typical drinks stall … 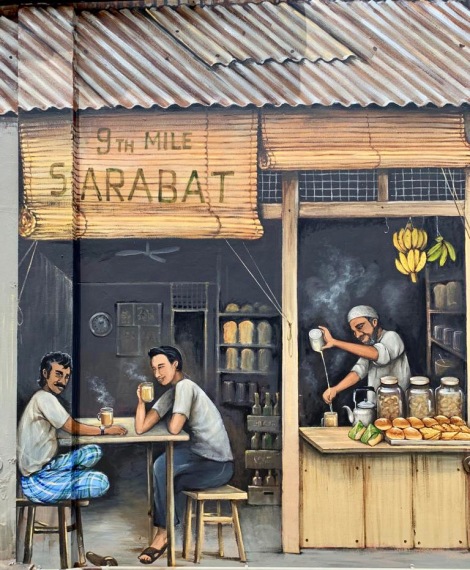 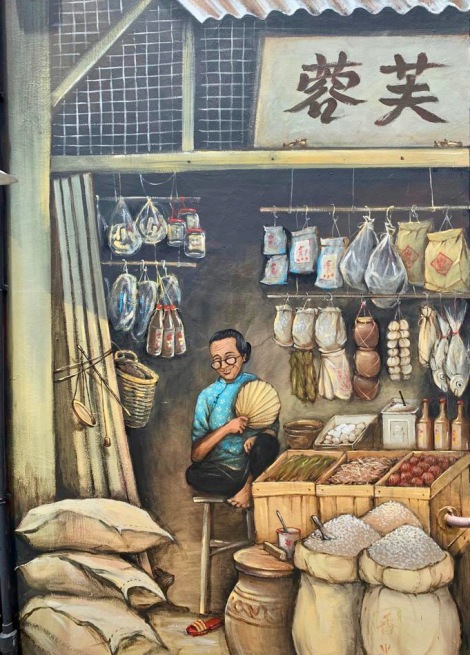 … as well of scenes from daily life … 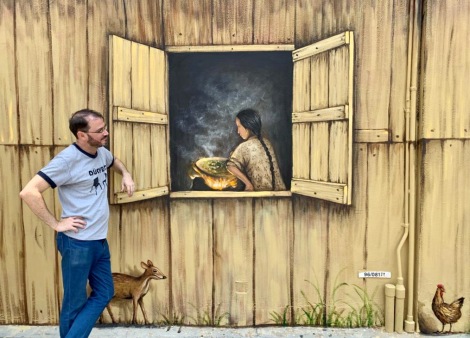 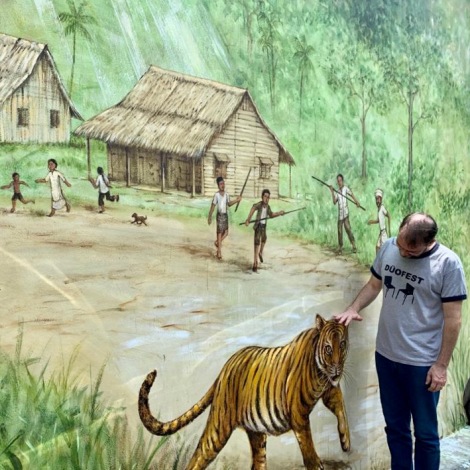