Continue my adventure of visiting every MRT (subway) stop in Singapore. This time, I rode sixteen stops on the Circle Line (aka the Yellow Line) — sixteen is about what a reasonably energetic person can manage in a day.

Get out at every stop and spend ten to fifteen minutes wandering around (no more than fifteen unless there’s food involved). Walk up all escalators. Stop only for photos and snacks.

It’s worth noting that the name of the Circle Line is deceptive; it does not actually run in a full circle, though it comes close: 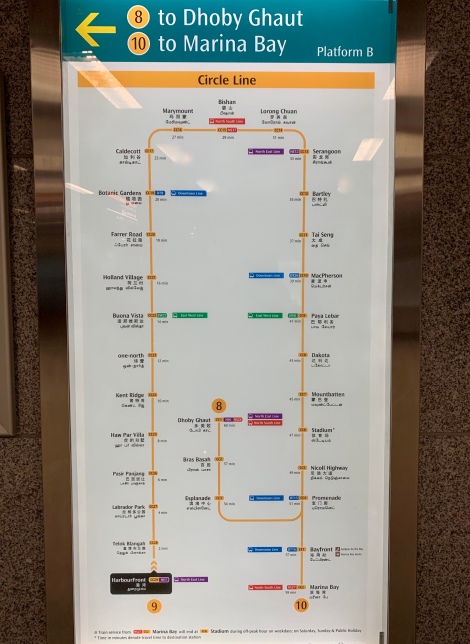 HarbourFront is the gateway to so many things: a huge mall (VivoCity), ferries to nearby islands in both Singapore and Indonesia, the Sentosa Express mini-train, the southwestern terminus of the MRT’s Northeast Line, and the start of the Mount Faber Park trail.

HarbourFront is also one of the six stops along the Singapore Cable Car line: 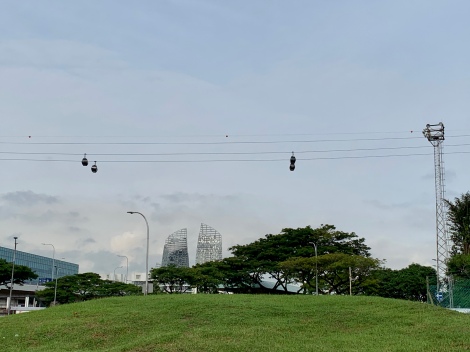 A huge housing estate sits on one side of the Telok Blangah station, and the Keppel Club golf course sits on the other. The giant pointy towers of the Reflections at Keppel Bay condo buildings rise up in the background:

The highlight of this stop, tucked in between the housing estate and a busy highway, is the very-pink Telok Blangah Ting Kong Beo:

This Chinese temple, built in the early 1920s, features life-size statues of the Eight Immortals, brought to you by the same artists who crafted the many wild and wacky figures at Haw Par Villa (more on them later).

The facade is just wonderful …

… and it’s one of the few temples in Singapore at which I have seen this kind of traditional incense hung from the ceiling: 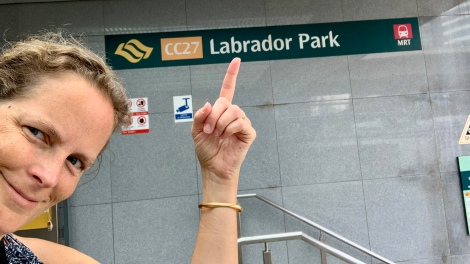 Moving further west along the coast, you get to Labrador Park Station, which leads you to a cluster of business towers on one side of the highway … 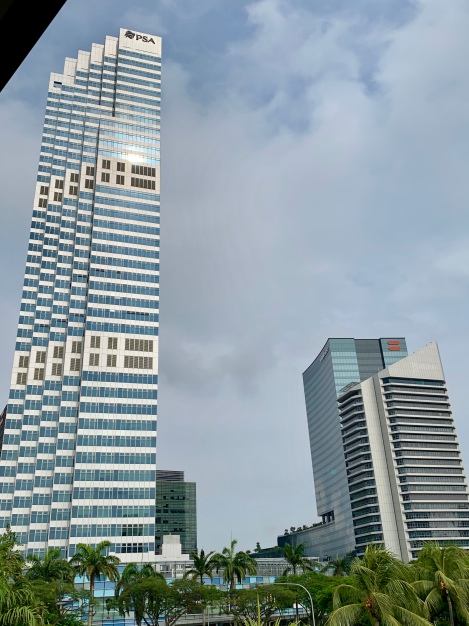 … and the Berlayer Creek wetlands area on the other:

This stop provided by far the most interesting juxtaposition of the trip, with skyscrapers standing nearly shoulder-to-ankle with jungly mangrove swamps. You can walk right into the Labrador Nature & Coastal Walk from here, or you can look out over (but not access, as far as I could tell) the western end of the Keppel Club golf course …

… or just stop and smell the flowers:

Unless you have super-secret port access, Pasir Pangjang has very little to offer to the casual visitor. There’s a huge hawker stall with a significant altar area out back …

…and then a long string of buildings that divides the rest of Singapore from the port. 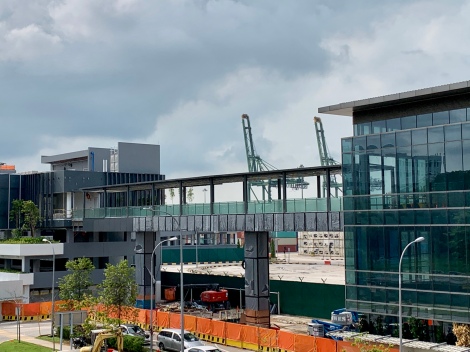 Singapore boasts the busiest shipment container hub in the word, which necessitates also having the world’s largest port. A shipping operation of this scale requires huge amounts of security, so when you try to walk near it (as I did, by wandering into one of the buildings in the photograph above), there are guards ready to helpfully tell you that (1) you cannot take any pictures and (2) you cannot proceed to exit the building on the other side. 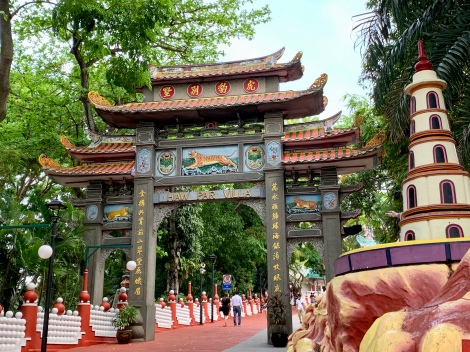 It’s rare to find truly strange things in Singapore, but Haw Par Villa has to be one of the strangest. This giant outdoor sculpture garden, built by two Singaporeans in the the late 1920s and early 1930s, now looks like something from another world.

The brothers hired craftsman Guo Yun Shan and his family to create this outdoor display as a way to teach the visiting public about the moral values of traditional Chinese legends.

But most of the figures aren’t signed, so unless you happen to know the legend at hand, you just have to make up your own story — in this case, of what I’ve decided is the famous Weasel-Fox War:

It’s a wacky place, but it was once the #1 tourist attraction in Singapore! As for the area surrounding the Haw Par Villa station, I’m not sure there’s much else to see — this is definitely the highlight. 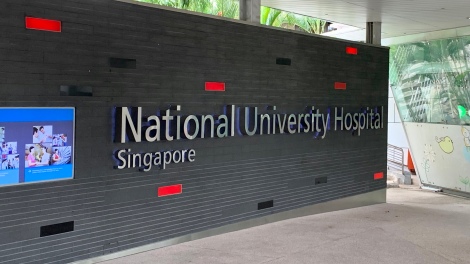 This is a giant complex, filled with a wide array of interconnected buildings. If you walk up a few blocks, you can also access Science Park — a tech R&D hub — from Kent Ridge Station:

one-north is the only MRT stop with no capital letters. This is a place that you come for work, not for fun; the station sits at the center of a vast business and research complex that includes giant glass buildings with names like Synthesis … 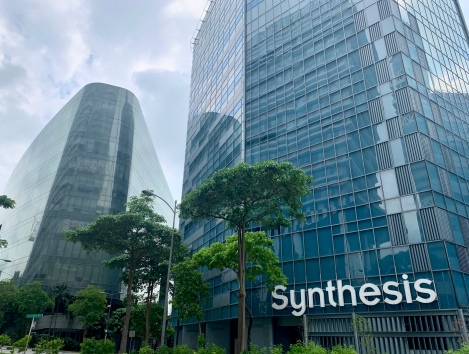 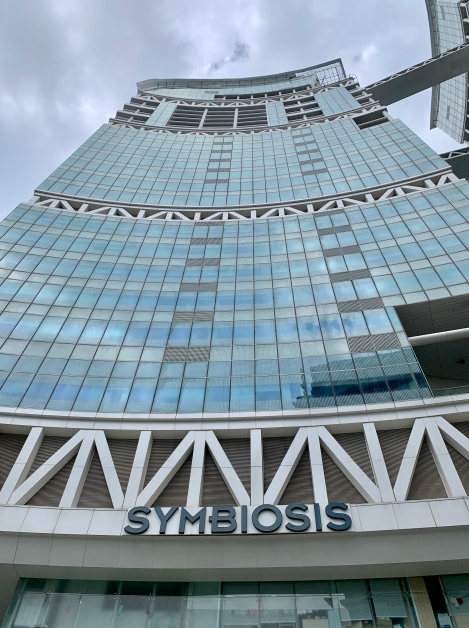 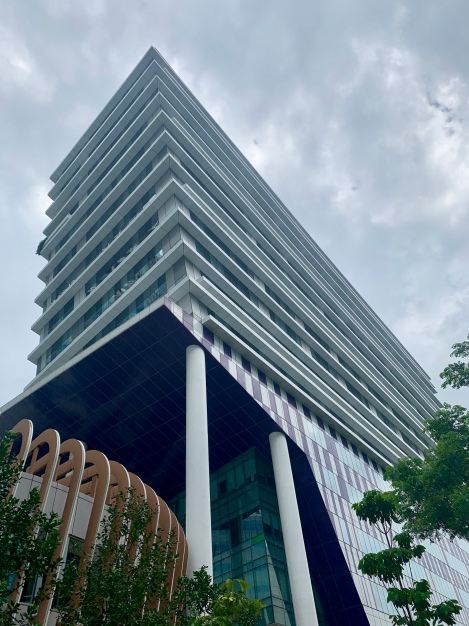 Unless you like to look at big buildings, there’s not much to do here — though I did stumble on a moderately interesting design exhibit on the first floor of the Symbiosis building. Sponsored by Singapore Good Design, it included this “flexible furniture” display:

More buildings! Here we have complexes like Fusionopolis (which the sign calls a “synergistic environment for info-communications technology, media, physical sciences, and engineering activities”), Biopolis (a “world-class research cluster for biomedical and life sciences, including basic drug discovery, clinical development, and medical technology”), an Metropolis (a “grade-A office building”):

I wandered through Metropolis looking at the collection of contemporary art:

Buona Vista is also home to the Star Performing Arts Centre, one of Singapore’s largest performance venues, and the Star Vista mall. But my favorite thing at this stop was the station art: Tree of Life by Giles Massot:

Holland Village is known as the place where expats come to shop, eat, drink, and get their hair done. You can get all sorts of things here, from fancy groceries to baked goods to English-language magazines: 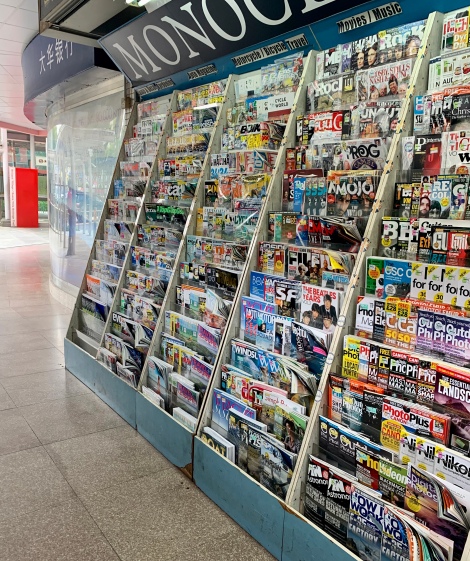 I hopped off the MRT at Holland Village for a refreshing, fruit-laden acai bowl at Project Acai:

Holland Village was named after Hugh Holland, an early twentieth-century architect, but Hugh is now largely forgotten, and the “Holland” part of his name is celebrated everywhere from the front of the hawker stall … 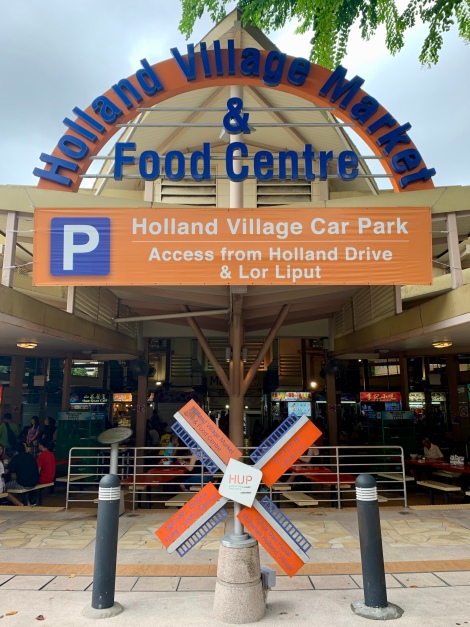 … to the MRT station itself:

Farrer Road is exactly what it sounds like: a road. You get off and are immediately on a giant street, with HDBs (Housing and Development Board residential complexes) on either side. And they’re pink! 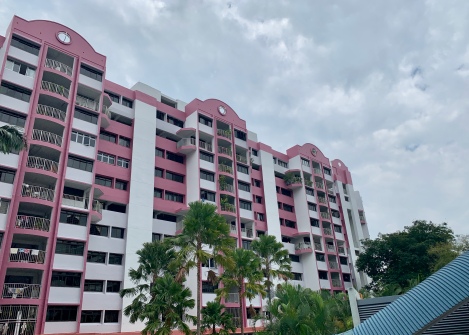 If you walk a little ways, you can also get to both fancy landed houses and condo buildings:

There is nothing at Caldecott — it feels like a station built for things that are going to come rather than things that are already there. The predominant items in view are fencing, grass, and cranes:

If you walk a ways — quite a ways — residences eventually come into view: 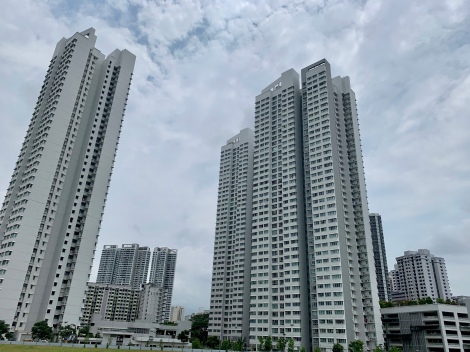 But there’s really not much around; Caldecott feels a lot like nowhere. The one redeeming feature was the station art by Hazel Lim, The Cartography of Memories, a “map” of local residents’ personal histories and anecdotes: 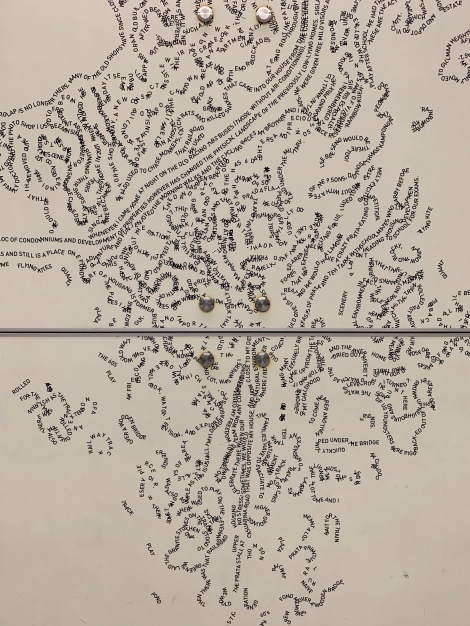 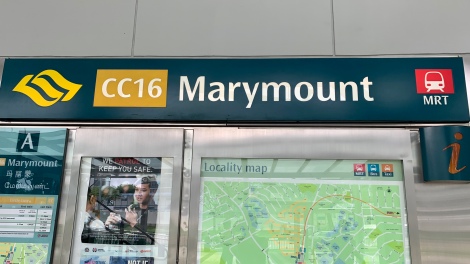 Marymount is pretty much roads and residences as far as the eye can see, with condos on one side of the major street …

… and HDBs (the Thompson Shunfu estate) on the other:

There’s precious little else to see here, but I did amuse myself at the Shunfu 3G Park:

This is, essentially, a large children’s playground ringed by an “Elderly Fitness Corner.” This “corner” is comprised of a set of outdoor exercise equipment, and I spent a little time on the swing/walker thing:

My favorite part of the Elderly Fitness Corner was this: 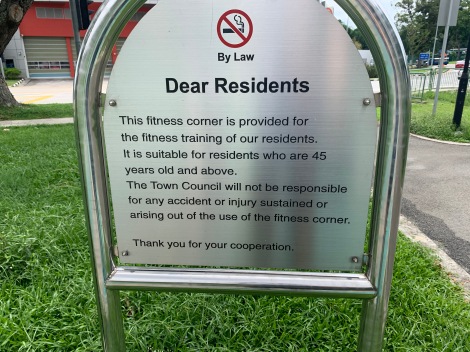 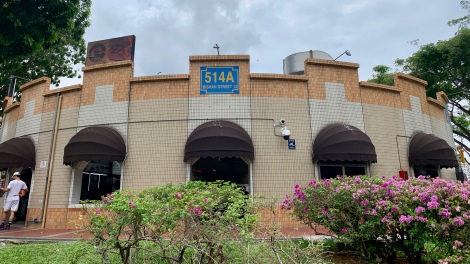 Bishan has a lot going on — after several stations that look pretty deserted, Bishan feels like a mob scene. You’ll find an old oval food centre (above), a bus interchange, two MRT lines (red and yellow), HDBs, a wet market, a tiny old playground that has original tile-work …

… lots of condos (including one of my favorite pieces of Singapore architecture, Sky Habitat) …

… and a giant mall, Bugis Junction, right above the MRT station: 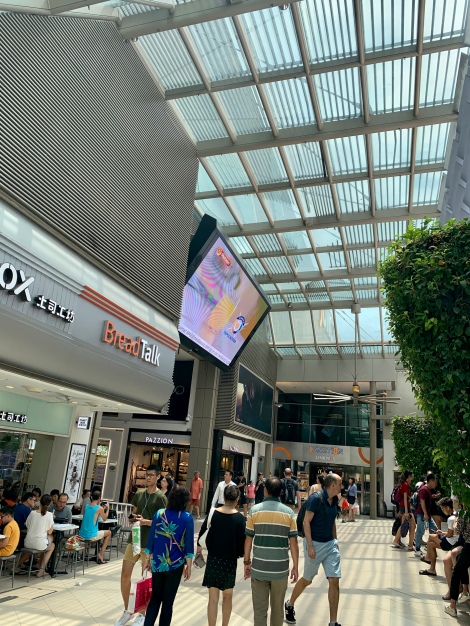 I’m not a big mall fan, but they did give me free cotton candy. 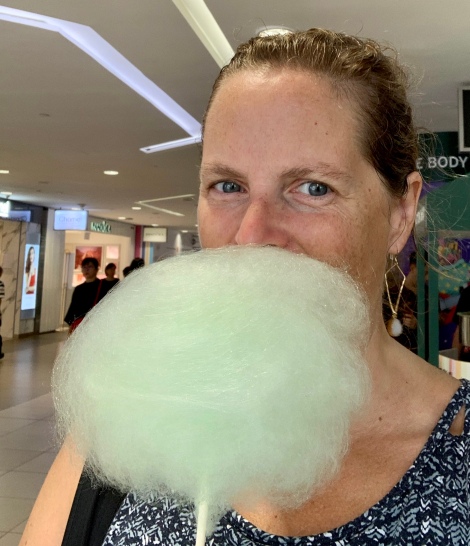 … HDBs along a drainage canal in the other …

Like Bishan, Serangoon is another hub of activity — and it’s the intersection of two MRT lines, the purple and the yellow, so I’ve been here before. Notable features include an enormous mall (the NEX) and lots and lots of HDBs …

I liked the art that I found at the base of some of these HDBs (HDBs are generally pretty featureless and art-free, so the presence of murals is a delightful change):

There’s fun station art here, too: View of Life, a riff on batik, by Sarkasi Said:

3 responses to “Singapore by MRT: the Circle Line, HarbourFront to Serangoon”