Woke up early today, only partly by choice.  We’re staying in a beautiful log cabin (sorry the picture’s sideways), in the “Loft” room. 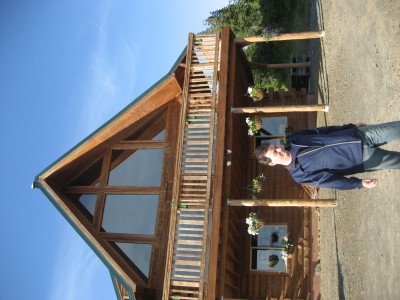 It’s a lovely space, but it’s in the top story of the building, and there are no walls between it and the cathedral ceiling of the B&B’s main living room.  So when our hosts came up to prepare breakfast at 6:30, the noises served as our alarm…

After breakfast, we drove up for our horseback riding trip.  We had a five-hour ride (with a break for a picnic lunch) with cowboy Mark of Trails End Adventures.  He was a real character, and the ride was beautiful:  down to the tidal flats, mountains on one side and hills on the other, three giant glaciers in view the whole way.

I rode on a pinto named Hawkeye; Pres rode a bay named Hannah.  My horse was perfectly trail-trained, biddable and comfortable.

Prescott’s horse was more ornery; she wanted to be at the front of the pack at all times.

The trail started down a steep dirt road and then went down to the beach (of Kachemak Bay).  We rode along the tidal flats, along a Russian Orthodox fishing village).  We continued to the back of the Bay to the Fox River, making a number of creek and river crossings (we felt like real cowboys)!  Stopped for lunch on some old logs by the river, and the wildflowers (mostly lupines and white yarrow) covered the meadow behind us. 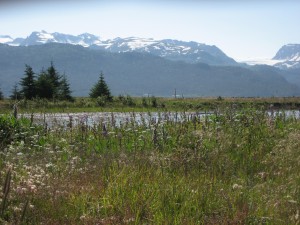 The mountains are everywhere here!

Mark has a great trail dog named Dottie — she’ll jump right up on his horse’s back if given the chance!

The way back was through the woods — mostly cottonwood trees.  The views here are endless — it’s impossible to capture the panorama here, even with a panaoramic lens.  And there’s nothing like seeing it from the back of a horse.  Now I’m like a little girl who wants a pony for her birthday …