Our day didn’t go exactly as planned, but it was a great one.  Started out admiring our very bright cottage – not a color scheme found in many places.

Struck out for the beach in Kapa’a; stopped at a heiau en route.  A heiau is a traditional Hawaiian place of worship – on Kauai, there are seven of them that line the Wailua River from the ocean to the top of Mount Wai’ale’ale (but you can’t see the last heiau without a whole lot of permitting and someone who is willing to give you a very special helicopter ride). The heiau at which we stopped isn’t in great shape – it looks like a low rock wall.  It does, however, have a really good chicken population (as does most of the island, though here Prescott said he felt like he was in a scene from “The Birds”).  It also has a lovely view of the Wailua River, a waterway that was sacred to the Hawaiians. 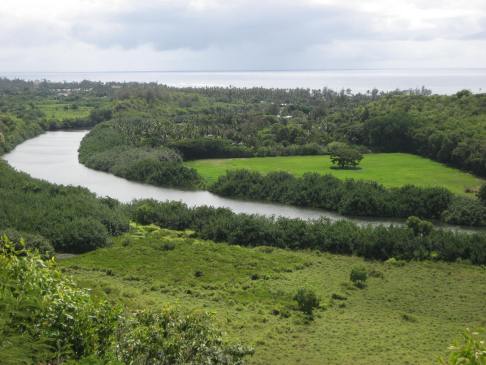 Drove down to Lydgate Beach Park, which is supposed to have the best snokeling on Kauai (because they’ve created a lagoon into which the fish are supposed to get poured over the walls by the waves).  Only T went in the water; she saw only about 19 fish of 4 different varieties in her quick swim around the small space.  We decided to give up on this particular adventure.

On our way home to shower, we found a papaya tree just waiting for Dusty: 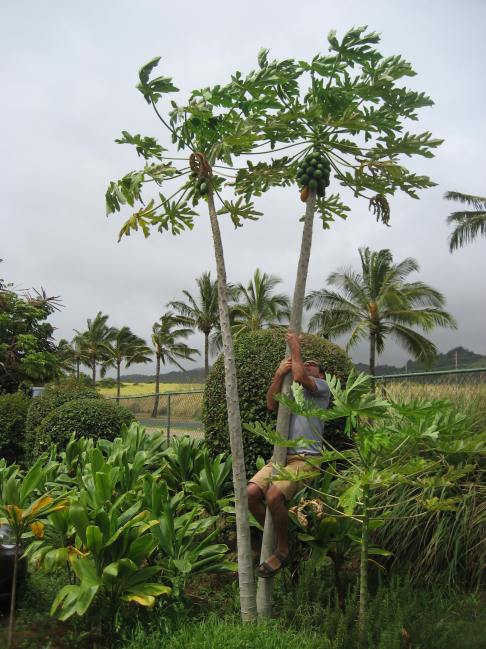 Our first intentional success of the day was in finding Small Town Coffee, an excellent coffee shop with an unusual decorating scheme. 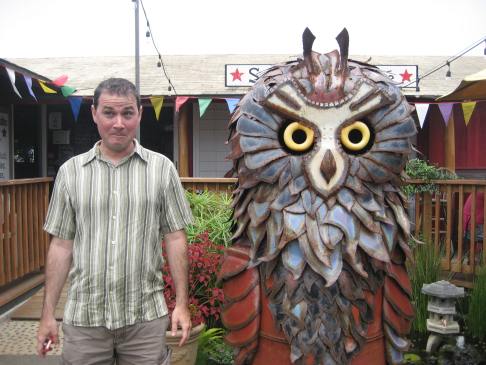 But that success was fleeting.

Our next failed attempt was a search for a plate lunch food truck that no longer seems to exist.  So Pres and T had ahi tacos at a food truck called Al Pastor.  The tacos were pretty good, probably in our top four (we’ve been doing a pretty serious, very non-scientific study).

Then we headed for our third and final failure of the day: an attempt to find the Kealia farmer’s market.  After driving up and down a beautiful road up into the ranchlands, we found out that the farmer’s market hasn’t been there for a year.  Here’s what we found instead:

So we went to nearby Kealia Beach instead, which turned out to be a wonderful find.  We originally thought we might just sit and watch the boogie boarders, but big waves of the “don’t swim here” variety drew Dusty and Pres in (though they would have been even happier with boogie boards).  Their riding attempts were exciting but short-lived.  T and J leapt around in the waves; Dusty made friends with the most amazing wave-jumping, wave-riding dog we’ve ever seen. 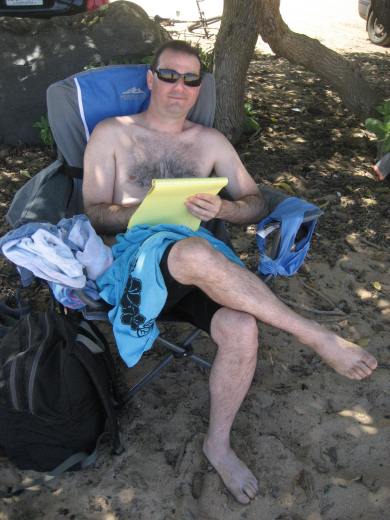 Snack time took us to Tropical Dreams, said to be the best ice cream on the island (I’d say Pink’s in Hanalei gives it a run for its money, but the good news is that they’re both excellent).  Our very chatty server gave us lots of tastes and little tiny extra scoops of what he thinks we should’ve gotten at the end (he also told us that he used to work for a telecom company and control 85% of the Internet; we’re still wondering about that claim).  The mint oreo ice cream is truly amazing. 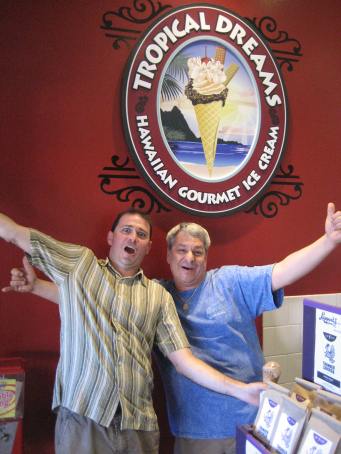 Our next stop was Wailua Falls, which has an incredible overlook.

There’s also a steep, unofficial trail that plummets straight (but safely on days like today, when there’s no mud) down to the falls.  The falls, all 173 feet of them are magnificent at the bottom (and there are actually three separate falls, not two, but you can only distinguish the third after you swim most of the way across the large pool).  Had a wonderful swim.  You can’t swim right under the falls – between the force of the water pouring down, the current, and the undertow, it seems nearly impossible – but you can swim happily in the spray and around most of pool.  As Dusty says, we’re like dogs to water (and he once again played Gollum in the rocks). 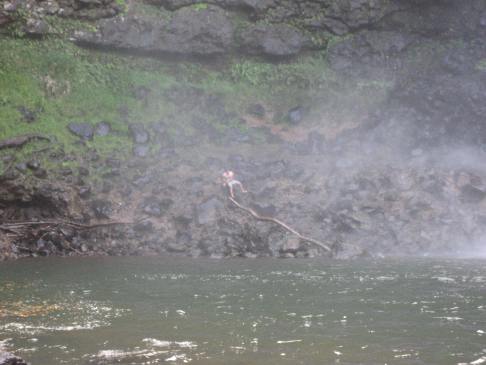 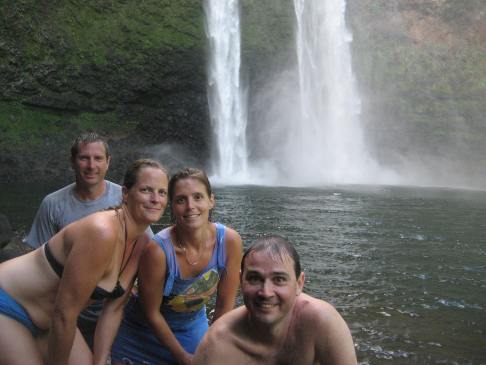 Dinner at Verde, an outstanding New Mexican restaurant that actually has quick service (a marked departure from pretty much every other restaurant on Kauai – they truly operate on Hawaii time).  Highly recommend the restaurant, especially for their stacked seared ahi enchiladas.

Pres and T played one game of air hockey at the Fun Factory, where we’d played on our honeymoon!

Back at the cottage, J and T took a walk through the neighborhood.  It’s an interesting mix of houses; though there aren’t a lot of trees, most have nice gardens (including orchids, odd lawn art, and unusual topiary — who knew you could grow a staghorn fern on a stick?).

Home for Bananagrams, reading, and a rousing game of O Hell!