Woke up very late — jet lag attacked us in a serious way — but J says that her sleep cycle app approved fully of the sleep that she got.

Enjoyed our bikes so much yesterday that we rode them to the Rembrandt Museum. On the way, we passed by the Royal Palace, which is an old building very much in need of a good scrubbing.  In front, they had imported bucket-loads of sand and were playing the 2014 Netherlands Sand Soccer Championships.  This seemed very random. 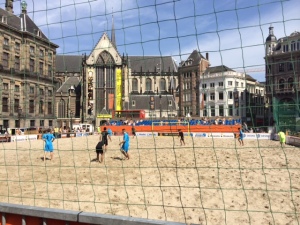 We also got lost and stopped by the Waag — which has been, in its time, a gate to the city, a weigh station, a place to teach anatomy, a guild house, and a site for executions (so overall, a really fun place). 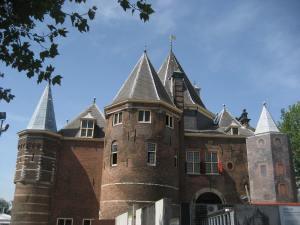 We also wandered through a market on the square in front of the Waag, where you could buy everything from cheese to flowers to herring. 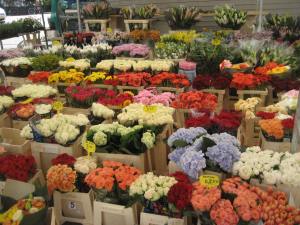 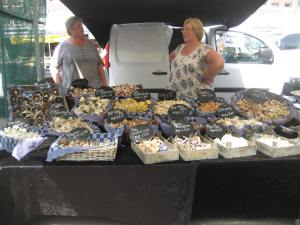 At the Rembrandt Museum, we saw Rembrandt’s bed, his poffertje pan, and his etchings (and learned about his very complicated personal life, which seemed to include fighting with at least one or two mistresses). We also appreciated the AC — it’s getting hotter in Holland by the minute. 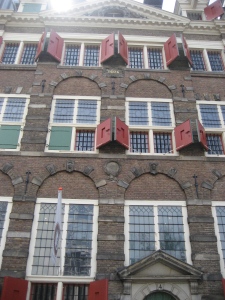 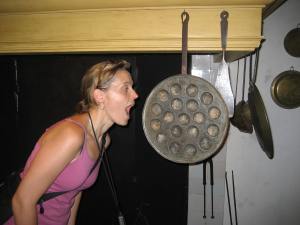 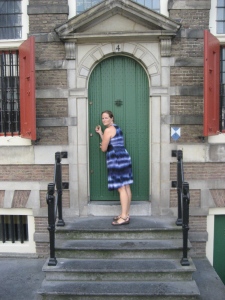 Walked over to the Zuiderkerk, Amsterdam’s first Protestant church, which no longer operates as a church (it’s in the old Jewish neighborhood, so it didn’t have enough patrons by the 1920s to keep it up and running). 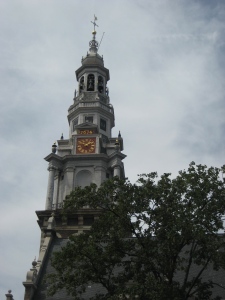 It’s in a neighborhood with lots of post-War architecture, because the Germans came through the neighborhood and pretty much obliterated it during the war.

But the old church has a really cool bell tower, which we climbed, and from which we had great views of the city. But the views don’t give you much perspective, since nothing in Amsterdam is especially tall — there aren’t many high landmarks. It’s mostly a city to be seen by foot. 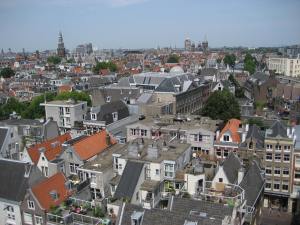 Back onto our bikes, feeling pretty deathly hot and dehydrated (that was a theme of the day). Rode to the Albert Cuyp market, which is like a stunning mix of Chinatown in New York, a Guatemala street market, a farmer’s market, and a Dutch souvenir shop — you can buy everything from fluorescent shorts to fresh raspberries (yum!) to umbrellas (within J’s price point). But all we bought, aside from the umbrella, was a fresh stroopwaffel. Delicious! 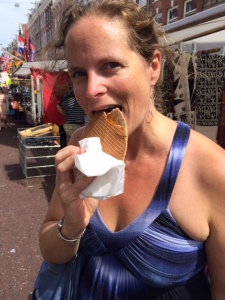 Stopped for an ice cream before hopping back on our bikes. We were both feeling pretty exhausted, but I’m glad to say that we’re getting better at navigating the city (and at biking without feeling like we might be killed at any moment by an oncoming tram or scooter).

Everyone was out today in their boats on the canals — it was over 90 degrees — so people were feeling festive and enjoying a day of hot weather without rain, which is a rarity in this city.

J and I went to a Pancake House, where we actually thought we might die of heat exhaustion (Amsterdam isn’t equipped with very much AC, or even fans). We had poffertjes, but they’re not like what mom made when we were growing up! (For those who don’t know, poffertjes are like mini-pancakes, but they’re yeasted and are served with butter and powdered sugar.) We were disappointed and plan to continue the search for better ones tomorrow.

Home for a shower and a nap, then we did a walking tour in the Jordaan/9 Streets areas. The architecture along the canals is really cool — lots of tiny rowhouses (some of which lean over so much you think they might fall) with carefully-designed gables. 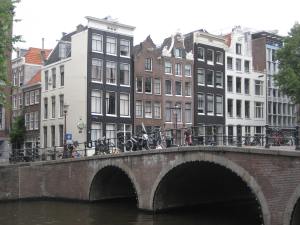 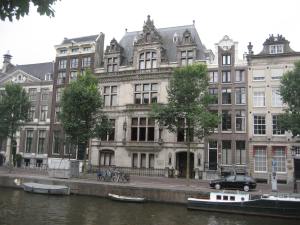 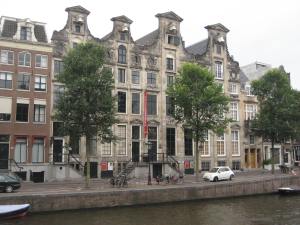 And the stores are fascinating; as with any good city, they seem highly specialized, so you can find one store that sells just rubber stamps and thermometers, and another store that sells only ukeleles and tiny banjos. Then there’s an empty store that says it’s an “Intellectual Playground,” a 3-D printing store, and a store downstairs from our apartment that calls itself a “Storytellers” place that appears to be some sort of a tech start-up.

Dinner was a traditional Indonesian rijstafel at Sampurna — about twelve little dishes, very spicy, all so yummy we wondered why we don’t make Indonesian food more often (or ever). 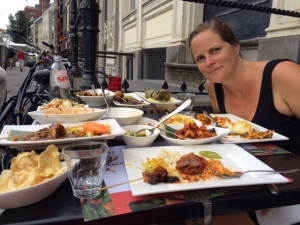 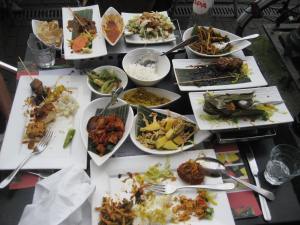 The restaurant was in the flower district, which is much more diverse than the area when we’re staying — but sadly, we arrived after the flower stalls had closed. But a peek in through the windows showed everything from fresh hydrangeas to cyclamen bulbs to thousands of tulip bulbs.

Walked home and then decided to go out for drinks. We painted the town slightly red with two amazing drinks apiece at the Bar Oldenhof, which were worth every penny we paid for them (and we paid a lot of pennies!) — it’s so much fun to have a well-made cocktails. Old-school Dutch interior (very dark, maybe Dutch mixed with English hunting lodge), a grand variety of patrons (British, Dutch, Swedish), and lovely beverages. I had a Penicillin and a King’s Cup; J had a Lucien Gaudin and a Doctor Tulp. 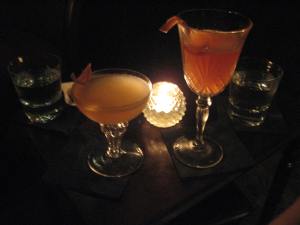 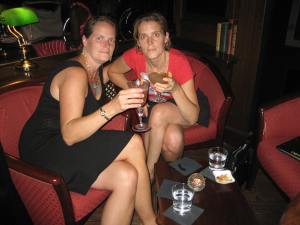