It’s my birthday! That means that the best way to start the day is to spend nearly two hours IMing and on the phone with the nice people at AT&T, trying to get them to explain why I have no cellular data despite the fact that I’ve definitely paid for it. That was an entirely unsuccessful ordeal, but I was able to do a few push-ups while they fiddled around uselessly on their end (sadly, I have no pictures of any of this extravaganza). While I waited for “assistance,” J went on a run in the Vondelpark, which she said was filled with people running and biking (it seems to be the only place in Amsterdam where exercise happens). According to J’s report, they also have a lot of bad art to admire there! 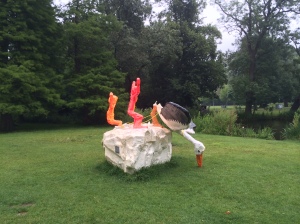 J and I finally went to a cafe for a very late breakfast. The first cafe we went to was closed (part of a long line initially irritating-but-ok problems today), so we ended up at Singel 404. The food was really good! J had brown bread that was essentially loaded with salad, a round of goat cheese and pesto; I had brie on brown bread with bacon, walnuts, and honey (amazing!). It’s so good to be in the land of open-faced sandwiches.

Speaking of things the Netherlands has that we don’t:
1) Gardens. Lots and lots of gardens. On roofs, in alleyways, in window boxes — everyone has a garden.
2) Places that stay open for drinks really, really, really late.
3) Cheese shops. Bakeries (especially ones with sweet things). Good cheese. Good yoghurt.
4) Bike paths. Bikes. No traffic in the cities. The one caveat here is that the bikers all drive as if they might run you over at any moment.
5) Things flavored with cassis (black currants): juice, ice cream, yoghurt.
6) An ability to leave the past in the past and build things that are architecturally challenging, if not always beautiful.
7) An awsome futbol team, and fans who wear orange.

Things we have that the Netherlands doesn’t:
1) Shower curtains. What’s up with this?
2) Screens in our windows.
3) Service in restaurants. Why does no one here want us to pay for our meals?
4) Water in restaurants. No one here in restaurants seems very interested in giving us water unless we pay about $5 for it.

5)  Stairs that fit all of your foot — not just half of them.  Climbing stairs here is like climbing a ladder (and climbing down — don’t get me started.  How does anyone here drink so much?) 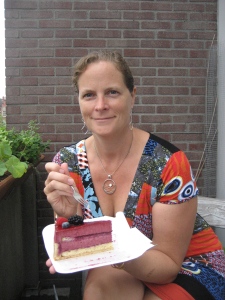 Took a bus to Schiphol airport…

…But at the airport, we found out that the rental car that we wanted to pick up was at an off-airport location. So we took a taxi to the rental car agency (realizing only when we arrived at the car place that they have an airport shuttle) and got our little Fiat Panda.

J drove us to the town of Doorn (we only overshot our exit and had to double back once), which used to be called Thorheim, which means House of Thor — which is so cool that I have no idea why they changed it. Doorn is a very cute village in the woods — an interesting change from cities and the farmland with cows that we drove through to get there. It’s easy to forget that Holland has woods!

Went to the Huis Doorn, the “castle” where Keiser William went in self-imposed exile after World War I. His estate seemed a bit severe, but we had a nice time walking around in the misty rain, and someone is keeping very cute deer (they wag their tails!) in an enclosure in the back. There was also a great dove/pigeon cote (well, I thought it was great — not sure J agreed).  J didn’t want to be photographed with a German Keiser, by the way. 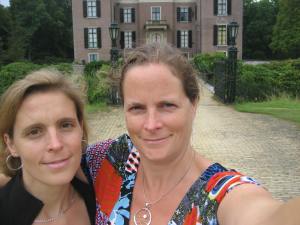 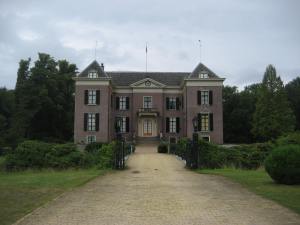 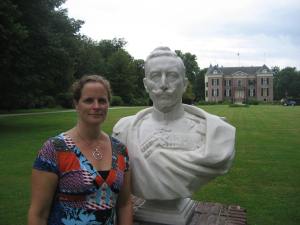 Spent a little time in the pharmacy in Doorn looking for a cure for J’s poison ivy, then drove to Cocky & Atie’s house in Leersum. It’s so nice to be in a place that’s cozy and green, with kind and fun relatives.  When we asked them about the good and the bad of the US and the Netherlands, our wise relatives note that what the Netherlands has is a community of individuals who take care of each other — in the US, it’s each person for him or herself — and what the US has are space and freedom, both mentally and physically.

What a birthday dinner!  Cocky could run her own restaurant — she served: tarts of her own design (lettuce, sundried tomatoes, goat cheese, and some other wonderful things); perfect potatoes grown by Atie and prepared with butter, tarragon, & parsely; and the eggplant & a zucchini recipe from Ottolenghi’s “Plenty.”  The eggplant was served on our great-grandmother’s (our opa’s mother’s) serving dish!

This, with excellent wine and good conversation, made for an outstanding meal.  We ended with quark (a thick yoghurt relative) with plums, raspberries, blackberries, and currants.  Wow.  And Cocky gave me beautiful socks that she knit for my birthday!

Quote of the day, from Atie:  “Guests are like fish:  both are good for about three days.”  Agreed!