What a wonderful day! Well, J’s started off nicely — she went for a run in the woods — but mine involved another go-round with the apparently incompetent people at AT&T. After that, though, it was all lovely. We went swimming with Cocky at Leersum’s private community pool, which is the largest town pool I’ve ever seen. It’s three pools, really — one for the little kids, one with a slide for the bigger kids, and one for laps and high diving — but each pool is almost as large as my pool at the Y. And it’s out in the woods, surrounded by low grassy hills, so it’s beautiful. It was a perfect place to swim laps. 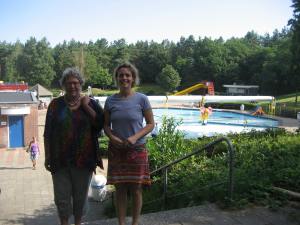 Then we went home & got in the car to drive to the Hoge Veluwe with Cocky & Atie. This place is, in short, spectacular.  The Hoge Veluwe is the largest national park in Holland, and it consists of woods, heath, and sand dunes. The best part about it (ok, there are lots of best parts) is that it has free white bicycles — you can just pick one up at the entrance and use it for as long as you like (or ditch it, as we did, at one of the many of the bike racks around the park).

We had lunch at a small cafe just outside of the park entrance — it’s amazing how much better European cafes are than US lunch spots!  Excellent bread and salads.  We then went to the very well-done information center (with a quick stop outside to play Suske & Wiske, two Dutch cartoon characters).

The info center taught us everything from how the sand dunes at the Hoge Veluwe were formed (cows and sheep stomping on the land) to what the roots of a beech tree might look like if were were underground. 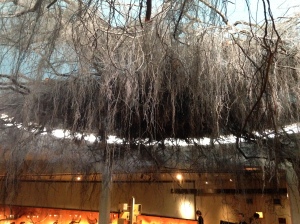 The other amazing thing about the Hoge Veluwe is that, smack in the middle, sits the Kroller-Muller: a fantastic art museum based on the collection of Mr. Kroller & his wife, Mrs. Muller, from the first quarter of the twentieth century. It has the second-largest collection of Van Gogh’s in the world — here’s one them (the first time he every painted a starry sky. 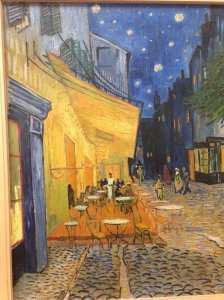 The museum also houses a huge number of Seurats, and everything from Renoir to Pissaro to Millet to Picasso to Mondrian (though J and I never found the last of these). I discovered a new favorite neo-impressionist, Paul Signac:

Then there’s the outside: a sculpture park that seemed to go on forever, no matter how tired of walking we were. It was simply amazing. You can have a lot of fun in a sculpture park — somehow, small art inspires quietude, while sculpture inspires cheerful irreverence. 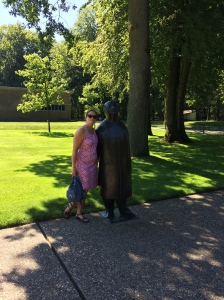 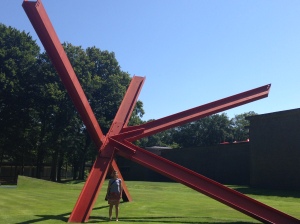 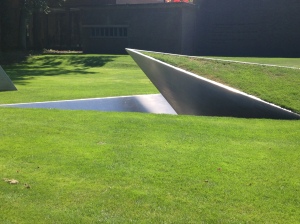 J and I are working on the art of the selfie (or, in our case, what we sometimes call the us-ie, the du-ie, or the sis-ie): 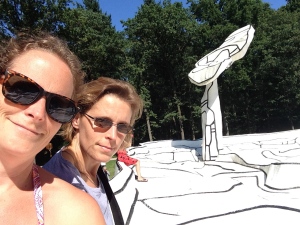 We also spent a good deal of time lying by this pond and wondering whether this sculpture was a mushroom or a bird (duck/swan): 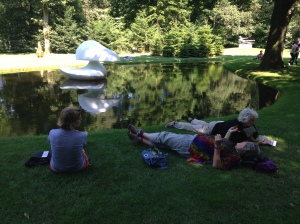 So the Hoge Veluwe isn’t like national parks in the US — there’s no particularly unique scenic wonder, and there’s a pretty limited sense of wildnerness. But there are a lot of bike paths, and art, and nature, so it’s somewhat like crossing Storm King with a small US national forest, and then throwing in some bicycles for good measure. So take a US park and civilize it, and you might start to feel close to the Hoge Veluwe.

Oh yes, and then add a hunting lodge/castle, designed for the location in 1914 by the Kroller-Mullers and called the Jachthuis Sint Hubertis.  Add all of that together, and you get a place that is amazing — and fun and great to spend a day (or probably a week) — by anyone’s standards. 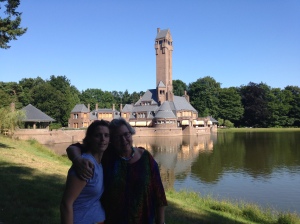 Ended the day at a restaurant in Driebergen called the Kraaybeerkerhof. We sat by a pond and ate vegetables from the biodynamic farm right behind the restaurant. It was very peaceful, and very yummy (especially the closing gooseberry-blueberry tart with whipped cream and a tiny drink of elderberries and roses). We walked around the garden afterwards, talking plants with Atie, who grows seeds from around the world and knows everything there is to know about vegetable gardening. 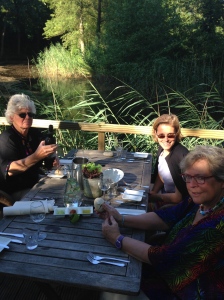 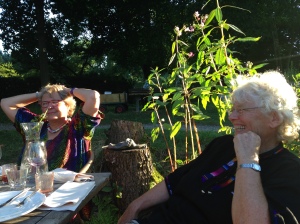