Busy day — lots of sightseeing, lots of travel.  Woke up early (not enough sleep) to brave the Athens bus system and travel from Piraeus to the center of Athens.  We felt very adventuresome — and ultimately successful in this attempt. Our goals was a whirlwind tour of the Acropolis.  Lots of photos from this trip, as you might expect: 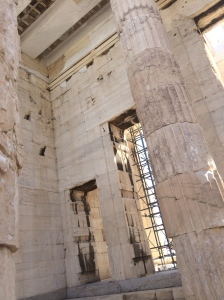 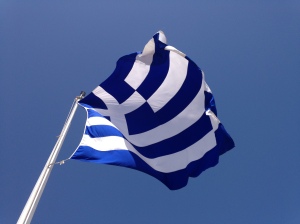 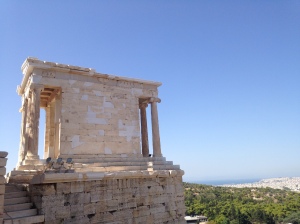 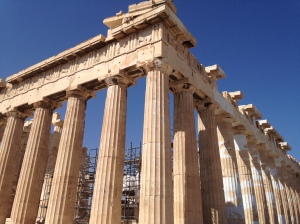 It was hot (but not as hot as the last time I was there, thank goodness), so we sat under a tree and listened to very stern guards say things like “put down the stone!” and “put down the cat!”  And we did our best to learn some history while we were there.  Right now, there are restorationists at the Acropolis taking it apart and trying to figure out what things might have looked like when it was built — so there are jigsaw-like piles of rock all over. 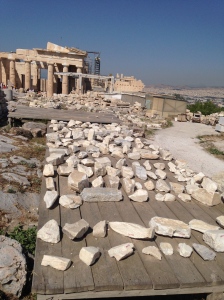 Oh, and there’s also a sea of humanity, as you can see above.

We both also tried our hands at a few artistic photos (the second one is of a ceiling, taken from below): 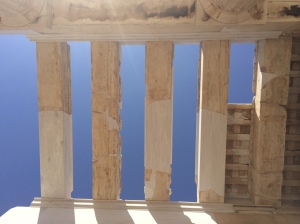 Then we ran for a bus back to Piraeus (in order to make checkout at our hotel) — whew! We picked up our bags and went right back to the same bus stop to take the express bus to the airport.  We added at least six words to our ever-expanding Greek vocabulary on the way down (we can say useful things like “goat,” “watermelon,” and “cucumber”).  We took one rest stop picture (if only the Jersey Turnpike rest stops looked like this: 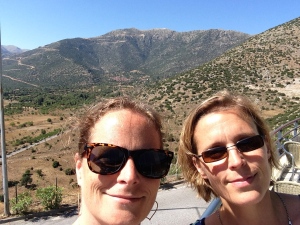 Lots of oohs and ahs as we drove — it’s hard to described how it looks as the scenery becomes greener and greener and the mountains become bigger and bigger.  Such a lovely drive.  We arrived the farm in the early evening and were met at Dimitri’s farm by George, our Koumani emcee and part-time caretaker the farm.  It was great to see him again!  Manos, his newphew, was there too, which was very helpful for English translations.  George was anxious because the electricity was out on the farm, so when the electricians showed up, George suggested we go swimming.  We headed down to the beach at Skoutari — where, since the sun was down, it was a bit cool for a real swim, but we waded in the water and lay on the beach (that’s me in the middle, of the picture below, though you can’t really tell).

J spent some of our beach time learning how to use the panorama feature on her phone, which should really come in handy down here.

We’ve just finished up our dinner at one of the village’s two tavernas — it’s so good to be back to a simple, farm-grown meal of a salad and daxos (tomatoes & feta on rusk).  George and Manos joined us.  We’re learning a great deal about Greece from Manos! 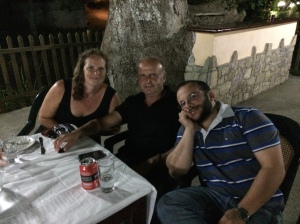