Woke up early to pack, clean up the farmhouse, and get out the door and into our little Fiat Panda.

On our way out of the village, we passed Andrew, a Greek-American who spends every summer in Tarapsa.  We offered him a lift into Sparta, which gave us a great chance to talk about the Greek economy (again), climbing Mount Taygetos (a plan for our next visit), driving in Greece (crazy), and local politics (complicated).  We also talked about our plans for tourism in the village — we have lots of ideas for how to improve it (farm tours, signage, olive picking), but we’re not sure anyone would really want to move forward with them.

Andrew also reassured me that the summer that we were here two years ago was, in fact, the hottest three-week span anyone can remember in recent memory.  Aside from today — which was really so hot that we couldn’t stand it — we’ve found the heat on this trip to be manageable.

Drove straight up the highway to Nafplio, an elegant port town about midway between Sparta and Athens.  Checked into the Hotel Ippoliti, a lovely hotel in the Old Town with all of the amenities one could ask for, including yummy candy at the front desk, air conditioning, antiques in the rooms, a perfectly cool kidney-bean swimming pool, and my favorite shower in the whole world.

This is the view from our balcony: 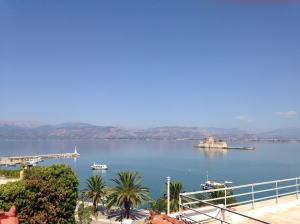 Walked around Nafplio, shopping and taking photographs of pretty much every door in town (J was inspired to start a series). 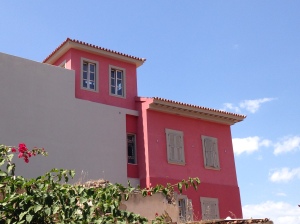 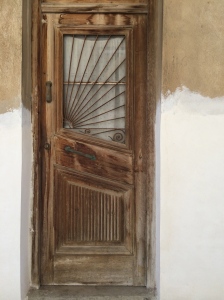 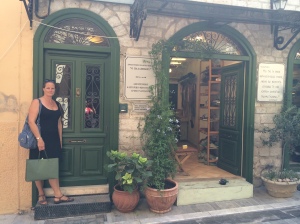 Had lunch at Mezedopoleio O Noulis, which makes Aubergine Imam, the best eggplant dish in the whole world (they make it super-soft, with melting onions and tomato and mint, and I really want the recipe).  We also had flambéed saginaki (cheese), which the chef lights on fire right in front of you.

The meal was outstanding, but we’re already missing the tomatoes from the village, which were farm-fresh and perfect.

Returned to the hotel to change into our swimsuits and headed out for the beach.  We’d heard that it would just be a short walk around the tall hill at the center of the town.  So we walked in the heat down a quiet promenade — it was the bewitched hour, and smarter people were indoors.

And then we rounded a bend and found a set of manmade seawater swimming areas.  These were so convenient that we skipped the beach entirely and just climbed down the ladders right into the water.  So refreshing! 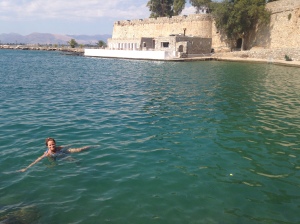 They were also set up for water polo, but we didn’t try that: 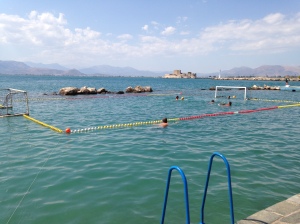 We followed up our swim with a nap and a swim (it might be more appropriate to call it a “dip,” because our pool is too small to swim).  Then we finally roused ourselves for the next adventure:  a trip up to the Palamidi, a Venetian fortress from the 1700s. 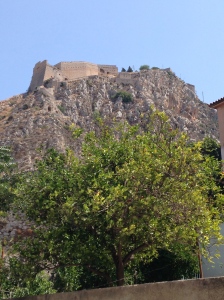 They used the fortress to try to keep out the Ottomans, but they weren’t very successful — and then the Greeks took the fort in 1822.  Turns out that the fortress wasn’t all that great in keeping out invaders, but it’s a huge and wonderful thing to see, filled with walls and sentry towers and murder holes.  You can climb everywhere — the Greeks don’t believe in “keep out” or “danger” signs (they’re happy to have you imagine falling to your death down a sheer cliff face into the sea) — and see everything. 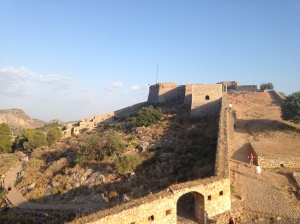 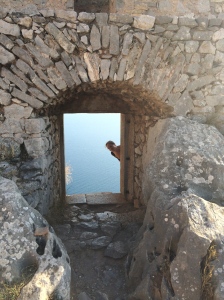 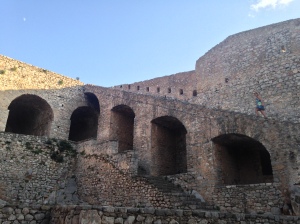 You can also pick figs (probably not the fortress’ original or current intention), a nice side benefit.

The fortress exhausted us — it required a lot of walking and climbing in the evening heat and growing humidity.  We drove back to the port near the Old Town, parked the car, and walked all over blazes looking for a supermarket, a pharmacy, and a closed-on-Mondays restaurant. But we did get to see the moon rising over the Palamidi (this photo gives an idea of what that looked like, though it lacks the crispness of the scene):

Growing grumpier (as J said, “I’m unpleasant when I’m unfed”), we walked back through the Old Town on a much better (and more successful) quest for frozen yoghurt.  Note to frozen yoghurt stores everywhere:  you should always offer the red currants with raspberries topping that we had tonight!

After a quick shower back at the hotel, we’re out to dinner at the Aiolos Taverna on Olga Street, just having finished our last dinner in Greece: dakos (soggy rusks with tomato & feta – much better than it sounds), peppers stuffed with saganaki (a firm kind of goat cheese), and souvlaki (pork on skewers, because we felt like we needed to try it at least once).  It was delicious and did a great job of reviving us.  J says, “we celebrated by sacrificing a pig to the Greek Gods.”  I also tried retsina, a white wine that’s been flavored with pine resin.  I liked it a lot; J made a face.

J would like to note that Nafplio is beautiful, and that everyone who comes to the Peloponnese should stay here for at least one day.  Night is good too — the streets are incredibly crowded, and everything is lit up and lively. 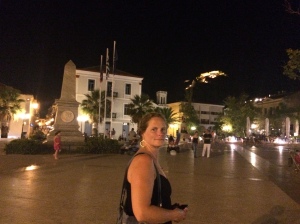 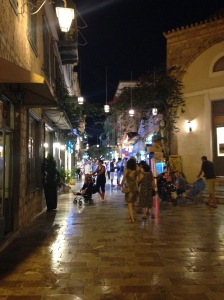