Woke up early for my final breakfast at Petite Provence.  It was amazingly crowded — I’d heard that people in Portland are obsessed with going out to brunch, and my morning experience definitely confirmed that.

Packed up, said goodbye to my hostess (whom I met for the first time about thirty minutes before I was headed out the door), and drove east.

My first stop was at the Bonneville Dam, fish ladder, navigational lock, and fish hatchery.  The dam is impressively large and a popular tourist attraction.  By far the most interesting feature is being able to watch the fish jump up the fish ladders — June is a great time to watch shad, steelhead, and salmon as they return to their breeding grounds. 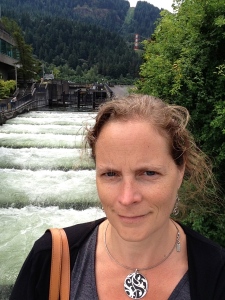 You can also go to underwater viewing windows to watch the fish — including lampreys, which are pretty creepy looking — as they swim upstream.  The exhibits are a little dated, but well worth a visit nonetheless.

I also arrived just in time to take a tour of the power station.  This would probably be even more exciting if I were more of an engineer, but it was still pretty cool (I can now give a very rudimentary lesson on how hydroelectric dams work, if anyone is interested).  The room with the generators is simply enormous — this picture can’t do it justice. 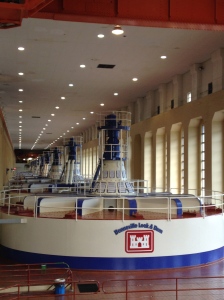 I am really excited about locks (not sure why — something about moving all of that water amazes me), but sadly, there were no vessels coming through during my visit.  And I could probably be excited about fish hatcheries, but there’s nothing going on at a fish hatchery in June, so there was precious little to see.  The highlight here was probably Herman the Sturgeon, a 10-foot-long, 450-lb freshwater fish who swims around a pond that looks far too small for him. But it’s amazing to look at him and think, “wow, something that large could come up to me in a river?  Yikes!”

This isn’t Herman — he was tough to photograph — but if you want to see another sturgeon, here you go: 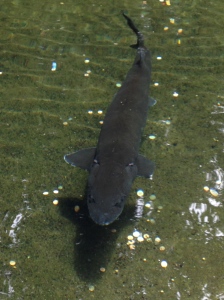 Continued to my next airbnb place, which is a beautiful small farm in Stevenson, Washington. This is the view as you come up the driveway: 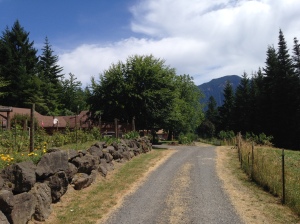 I was greeted by my super-friendly hostess, Maka, who moved to the US from Georgia (the country) six years ago.  She’s a great gardener who obviously takes her hostess duties very seriously (which is funny, because at several of my airbnb stays, I’ve never even met the owner).  Maka showed me all around, introduced me to their Afghan dogs (who actually came here from Afghanistan), told me about the farmers who keep cows and bees on their property, and basically gave me the run of the place.  These cows were very friendly and very interested in licking my arms.

Drove ten minutes to hike Wind Mountain, a steep but relatively short trail with great views of Mt. St. Helen’s, Mt. Adams, and the Columbia River Gorge.  Here’s Mt. Adams peeking out over the mountains that line the Gorge: 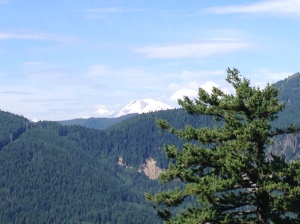 And a couple of views of the Gorge (the top photo is the view to the west; the second is the view to the east).  Neither of these really does the scenery justice — but the evening sun washes things out a little and makes it hard to capture the vastness and majesty of the place. 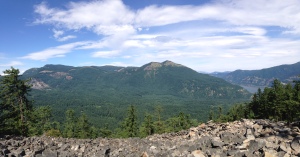 It was a great hike, definitely challenging, and it seemed drier than what I’ve seen thus far up near Seattle and Portland (which surprised me, because they are supposed to get more rain here than they do in Portland).  Fewer ferns, more brushy understory.

Dinner was at a very local pizza place/brewing company in the tiny town of Carson.  Great views of the Oregon-side mountains from the outside picnic tables. 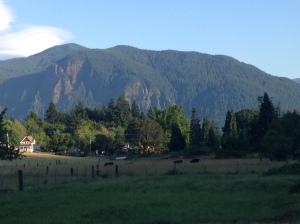 I wanted more views of the river, which are hard to come by (theres’ very little building along the river because (1) the train tracks and the road both run not too far from the river’s edge and (2) legislation that’s made this a scenic something-or-other makes it complicated to build here).  So I stopped at the Stevenson Cemetery, which comes right up to the cliff at the waterside, and wandered around. 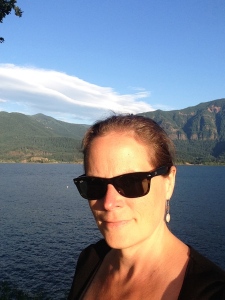 Nothing very old here — the earliest gravestones I saw were from the late 19th century.  A great variety of last names and some really interesting commentary on the gravestones (“she loved her rose garden,” “a woodsman,” “a fronteirsman”).

Came home and found Maka, her husband Jan, and Jan’s daughter sitting on their front porch.  They invited me to join them, and I had a lovely evening of conversation.