Slept in a little and took the Metro to meet Jenny’s French friends at the Picasso Museum.  I don’t know why I agreed to this little sojourn, since I’m not really a Picasso fan.  But they were doing a chronological review of his sculptural works, and it was interesting to see how he changed and developed over time.  Still, it was a good reminder that I would be better served using my time to see things that I actually like (though I did find a few fun pieces). 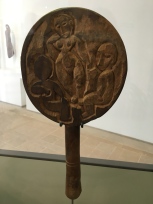 Parted ways with Jenny and went to see the Place des Vosges, the area where Mom, J, and I stayed the first time we came to Paris.  So beautiful, and such a good nostalgic visit. 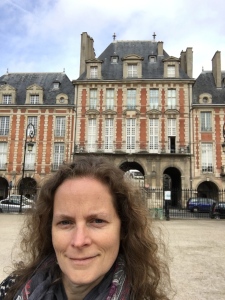 Then I continued walking, and I stumbled on Le Ble Sucre, which is supposed to be one of the best pastry shops in Paris.  What a nice find!  I’d had a pastry for breakfast and was anticipating going to a tart shop later, but I couldn’t resist.  This was officially my too much sugar day.  I ate this petit oeuf, which has passion fruit cream, vanilla cream, and raspberry cream on a pistachio cake … Yum!

Then I walked to Le Baron Rouge, a wine bar recommended by Jocelyn, where I had a really tasty Loire Valley wine at the bar.

Two random older French guys talked to me quite a lot at the bar — I understood precious little of what they said, but one bought me a drink and the other let me try his crevettes (shrimp that are so tiny that you eat them with their shells on — crunchy strange).

Took a long, sleepy Metro ride up to Montmartre, the big hill in the northern part of Paris where I stayed when I chaperoned the French exchange in March 2003.  It has changed a lot — fancier, more touristed, and generally crazier.  My first stop was at Les Petits Mitrons, where they sell incredible rustic fruit tarts by the slice.  So delicious.  Also stopped to buy a baguette and cheese, and to see a lovely twelfth century church.  Then I climbed up, up, up to Sacre Coeur, the huge basilica at the top of the hill.  But while it’s a beautiful place, I was mostly frustrated by the sea of humanity.  Too crowded!

You do get an incredible view of much of Paris from the stairs:

A nap at home refreshed me and made me feel much happier.  Walked down toward the Seine for dinner at Le Shabestan, a delicious Persian restaurant, where I ate coucou sabzi (some kind of a perfect herb souffle) and a wonderful eggplant mush.

Saw the Eiffel Tower lit up in the colors of Belgium (to commemorate the bombings that happened there earlier this week) on the way home.  Beautiful and moving. 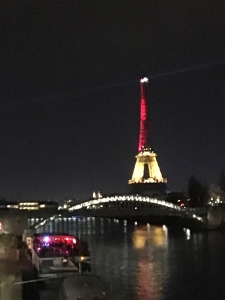 As a side note, here’s a picture of me in our tiny three-person elevator (it’s really made for three French people — not three people from the US):