Last night SAS hosted a barbecue for new teachers at the home of two SAS gym teachers.  New teachers who are coming to Singapore straight from other countries, such as China and Spain, were unusually excited to see things like relish and hot dogs.  This will be our last new teacher event of the year — tomorrow, all of the faculty will be back at school, and the newbies will be stirred in with everyone else.  It’s going to be very odd to go from feeling like I know everyone at the school to only occasionally recognizing familiar faces.

But one familiar face I will be seeing around school will be Prescott!  He has taken a job as the SAS Sustainability Planner, helping the Facilities Department do everything from overseeing the installation of a new solar array to think about how green initiatives might play into the master plan.  He’ll also be responsible for engaging the community with issues of sustainability, such as how best to make use of the school’s one-acre rain forest and how to get teachers to include environmental issues in their curricula.  It’s a great job description, and the Facilities managers are wonderful people, so he’s thrilled.

Anyway, after the barbecue last night, we all took a bus to the Night Safari.

What is a Night Safari? Think of a zoo, but at night, with lights strategically placed in the animals’ enclosures.  Then take away big gates/fences/windows in most places, and replace them with moats and short fences, and you have the Night Safari.  This turns out to be a brilliant format for a zoo, because (1) you can get really, really close to the animals (we could have reached out to pet the bats and the deer), (2) you don’t have to be out in the Singapore heat looking at animals, and (3) many animals are more active during the evening and early night hours than they are during the day.

We had low expectations for the Night Safari, but we thoroughly enjoyed ourselves.  First we took a tram through the major exhibits — lions and tigers and sloth bears, elephants and zebras and and hippos — and then we walked on the trails that really let you get close to the animals.  Highlights included otters begging for food, a fishing cat stalking its prey, civets snaking in and out of branches, and a serval (a wild cat) coming right up to stare at us (that one was through a window).  I had  a flying squirrel sitting just five feet directly over my head, and we spent time in a bat house where bats nearly dive-bombed our heads (a startling but fun experience).   We also watched fruit bats fighting over fruit (Prescott narrated the fight for me:  “No, Jared, you can’t have that banana while I’m eating my apple.”  “But I want this banana… I’m going to get it while you’re not looking…”).

We watched these porcupines explode into huge balls of quills when a baby porcupine got sassy: 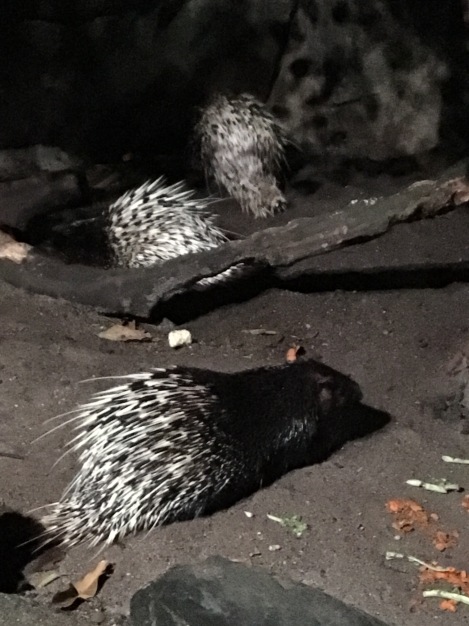 And these pelicans — such a strangely beautiful bird — glide through the water:

The whole Night Safari experience has a slightly eerie quality to it, because when you’re on the trails, you’re walking through a dimly-light forest, and then you’re looking for animals in slightly-less-dimly-lit areas, and it’s dark in the ways you think zoos probably should not be dark.  The park is also designed so that you often think, “that animal could probably get out of its habitat and eat me if it really wanted to.”  But it’s wonderful, because you see animals actually doing things, which is a rare zoo experience.