Imagine driving along Route 1 in Florida in the 1930s and stumbling on a giant park filled with random, elaborate, often life-size concrete sculptures of both man and beast.

Put these sculptures in and around a variety of wild and often unexplained dioramas, and you might have some idea of what our morning felt like.  We took a trip down to the surreal Haw Par Villa, once an estate built as a dramatic gesture by one of the founders of Tiger Balm for his brother in 1937.  It remains an enormous garden dedicated both to Chinese mythology and to teaching moral virtues — and it may be the strangest place in all of Singapore.

No explanation of Haw Par Villa can do it justice, and even pictures won’t quite do the trick, but I’ll try.  First of all, there are an unusual number of dioramas depicting animals in battle.  The rabbit vs. rats v. guinea pigs war brings to mind the Vorpal Bunny from Monty Python:

As you can see in the photo above, some of the statues are in need of a good repair job and a cleaning.

I really have no idea what’s going on in the photo below (we both felt that way for much of the morning) — I just know there’s a rat with a revolver and an elephant with a shotgun:

Then there are more straightforward depictions from Chinese myths, like the battle in Neptune’s palace:

And another battle whose name I’ve already forgotten:

There was also a series depicting the travels of a pious Buddhist monk, whose traveling companions included the monkey god and “Pigsy.”  Here are the the spider-women trying to seduce our hero:

They also have grand statues of great sages and Buddha and Confucius:

Prescott tried to teach the YMCA dance to these sumo guys:

And then come the teachings of morality.  There are lots of these scattered throughout the park.  This one was pretty tame (in a Guys & Dolls sort of way):

Then we learn that if you’re good and save a tortoise, you get saved from a shipwreck (and everyone else dies):

There’s also early evidence that Singapore was disposed long before its independence toward being a police state:

But the teachings of morality get dark when you enter the fake cave that houses the Ten Courts of Hell.  Here, you learn the grisly fates that will befall evil-doers in the afterlife.  This is where you are taken to learn your fate:

And here, for a brief sampler, is the sixth gate of hell (parental guidance suggested):

Unusually helpful signage in this section gave us information about how you earn the fates in the photo above:

The idea, when this piece was built in 1937, was that you were supposed to be so scared of all of these gruesome punishments that you would leave this display a better person.  Given how creepy it was (and how entirely unexpected it must have been to visitors in days before mass media), I would say it might have worked.

But I thought Haw Par Villa was most stunning for its truly bizarre animal statues.  These were just a start:

And then it got weirder … 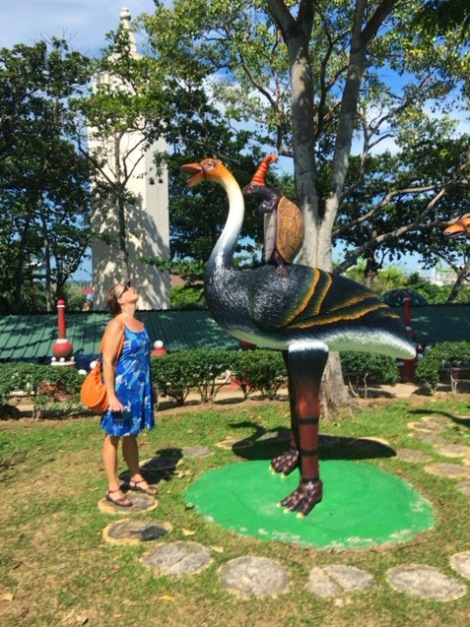 … and then weirder still…

Oh, and if you weren’t already feeling confused, the Statue of Liberty suddenly appeared:

It’s worth noting that Haw Par Villa was once the third-largest tourist attraction in Singapore.  And while it’s lost much of what must have been its original grandeur, it’s a shame it’s not a bigger draw for people today.

After that pleasurable but odd morning, we went to the wholly-normal, largely ex-pat Holland Village neighborhood for brunch.  We sat on an indoor swinging porch bench in a cafe:

Then we briefly wandered the little streets of shops and cafes before returning home to an afternoon of napping (Prescott) and pool time (me).

Before we head off to the evening’s events, I’ll leave you with my two favorite signs of the day.  First you have the attractions of coal-mouth — yum!

And then, well, there’s the most interesting demonstration of nationalism (or something) I think I’ve ever seen:

3 responses to “The Only Roadside Attraction in Singapore”