Yesterday was a national holiday here in Singapore.  Called both Hari Raya Haji and Eid al-Adha, this Muslim holy day celebrates the annual end of the hajj and honors Abraham’s sacrifice of Isaac.  Many stand-in sheep were imported to Singapore from Australia (the closest sheep zone) and killed.  And because Singapore wants to honor every ethnic group so everyone will get along, the entire country got the day off.

Prescott and I decided to go spend part of our holiday at the Singapore Art Museum, affectionately known as SAM. 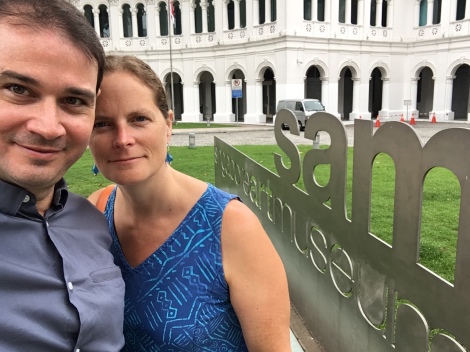 It’s a contemporary art museum housed in an old Catholic boys’ school, which strikes me as funny for some reason.

On the plus side, admission was free. On the down side, only two tiny galleries were open, because they seem to be overhauling every inch of the rest of the museum.  So we saw a few pieces that reflect on life in Singapore, such as this:

And then we went on in search of other museum options.  We headed out to SAM 8Q, an extension space of the Singapore Art Museum that’s across the street.  The lobby was littered with chairs and boxes and stuff, there was no one at the admissions desk, and the security guard was obviously sleeping.  So we did the obvious thing and slipped up the stairs.  Prescott said, “it’s just like an 80s movie — we actually just snuck past a sleeping security guard!”

But this is Singapore, so after we’d made it to the third floor and still had found no open galleries, the guard caught up with us.  We were apologetic while also feeling a little bit triumphant.  We left without incident — apparently, you don’t get caned for sneaking into the art museum.

Before we left, the guard explained to use that the museum would not have any exhibits until late October (that seemed strange to me, but we were in no position to question the museum’s curatorial choices).  So we had now been to two museum buildings and seen very little of anything.  Determined to make the most of a long trip downtown, we made our way to the Peranakan Museum down the street.

You could spend a lot of time trying to figure out what makes someone a Peranakan, as it turns out.  For today’s purposes, let’s say that they are descendants of Chinese persons who intermarried with people on the Malay peninsula and Singapore a few hundred years ago.  They have a distinct creole language (“Baba Malay”), food, clothing, architecture (more on that in my post from two days ago), and traditions.  Their weddings lasted for twelve days.  It’s rare to find anyone following that practice anymore, but a hundred years ago, there were visits to ancestor sites and ceremonial visits and walks and gift exchanges and robe wearing and bride teasing (yup, that’s a thing) and was-the-marriage-consummated-checking.

The Peranakans loved bright colors — in their tiles, in their ceramics, and in their clothes.  They’re especially famous for their embroidery, especially their beadwork.  This piece is from a table cover that contains over a million beads: 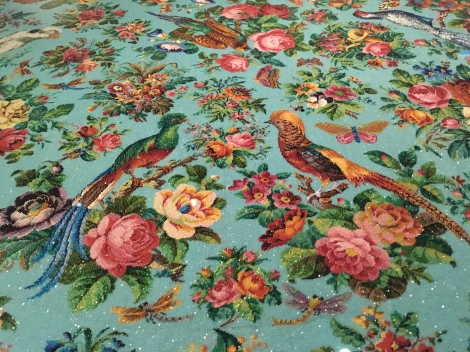 It’s incredible to see their handiwork: 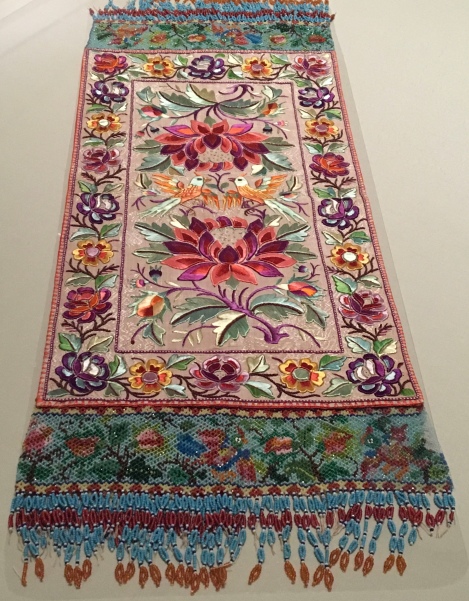 I was particularly taken with this little guy:

Their needlework takes all sorts of forms, from miniature screens … 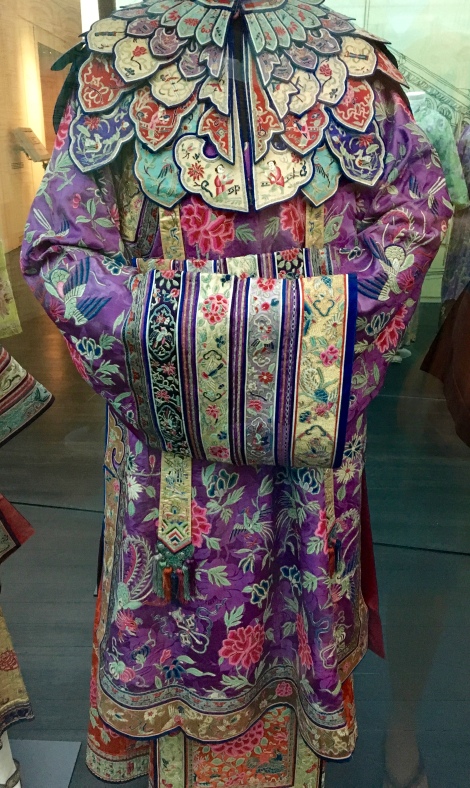 The Peranakans are best known for their beaded shoes:

You might think that you want to try your hand at this beading thing, until you take a look at how tiny the beads are and how many you need to work on a project: 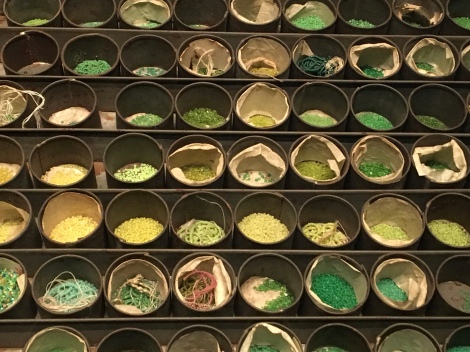 If needlework isn’t your thing, the museum also had great statues of Chinese gods:

The Peranakans also guarded their houses with lion-dogs: 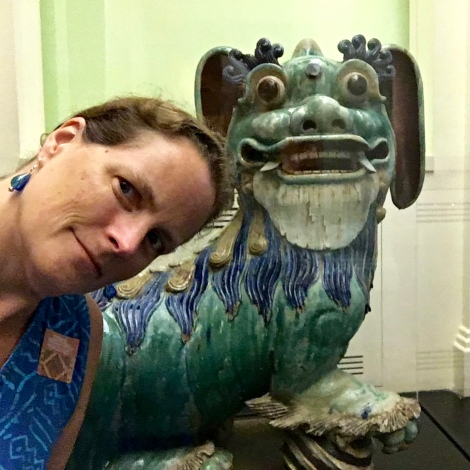 And Prescott found this sculpture commemorating the museum’s cat mascot just outside the front door: 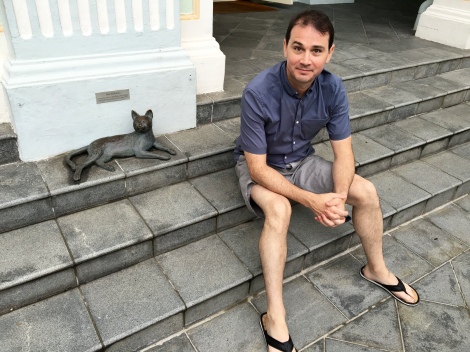 2 responses to “The (Not So) Great Museum Caper”