Last night I took my first trip up to the top of the Marina Bay Sands Hotel, where I went to have drinks at Spago with a friend.  The view is spectacular — you look down over the Gardens by the Bay complex, and you can see all the way across the sea to Indonesia (though that does not appear in this photo). 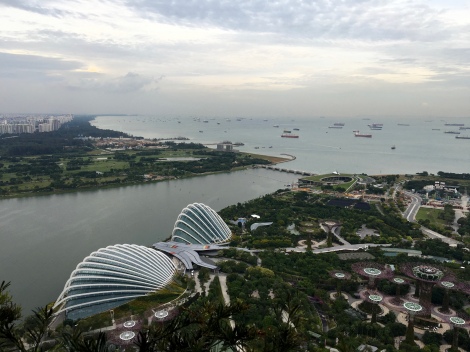 Spago offered a good view into how the other half lives — it’s a elegant, pricey, rooftop bar that has one of the best views in Singapore.  People are well-heeled, well-groomed, and well-dressed.  But the drinks are good and the surroundings are irresistible.  The balcony offers lots of chances to look out and over different parts of the city.  You’re also sitting just by the longest rooftop infinity pool in the world, and I had a distinct case of pool envy (you can’t swim there unless you’re willing to pay to be a hotel guest).

Tonight I took a detour on my way home, because my bus passes this fascinating temple every day and I wanted to take a closer look.  So I got off of the bus a few stops early and wandered around.

The temple turns out to be dedicated to Lord Murugan, the son of Shiva and Parvati (and also Ganesha’s brother).  I’m pretty sure that this is the holy family:

Murugan is a major deity in South India, which is where most of Singapore’s Indian population comes from.  My guess is that he’s the big guy in the middle of the big tower below, but I didn’t go inside, so I don’t have any way to confirm this.

The temple is right next door to a plant nursery, where I wandered around and wondered what might survive on our patio.  Prescott has visions of growing herbs, which I think will be fun in the short term and dead in the long term.  But I we’ll likely try them anyway.

The sunset was beautiful on my walk home — one of the nicest ones I’ve seen: 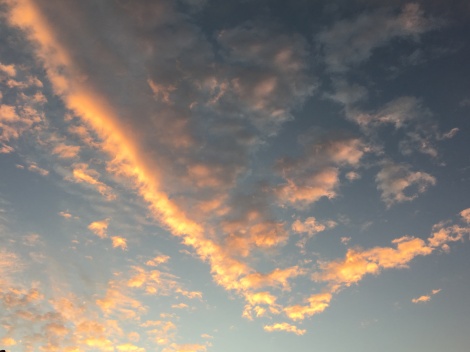 So that’s what my Thursday and Friday evenings looked like.  It’s definitely not Baltimore.