We were technically on a boat cruise on Friday, but I think we spent as much time in kayaks as we did on the boat itself.  We’d rented kayaks at a floating platform place the day before, but I’d sort of forgotten that we had them with us. 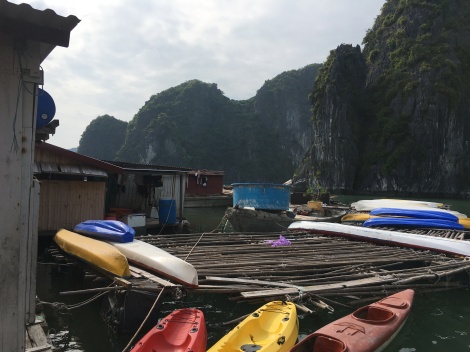 The kayaking is amazing, truth be told – you’re in and around limestone formations, finding hidden lagoons, exploring sometimes-scary tunnels, and seeing greenery all around. The day was cloudy and occasionally raining, so I was mostly just as happy to be in a kayak – the ocean water is very warm, and we were getting a little wet on deck anyway.

We have relatively few photos taken from the kayaks, because we only took a camera on one of our three outings (water activities and iPhones are generally not a great match). But here are some of the things we saw:

Here are some of the photos from our second kayak trip of the day (sorry, no langurs — I would have needed a much fancier camera to catch small monkeys at a distance): 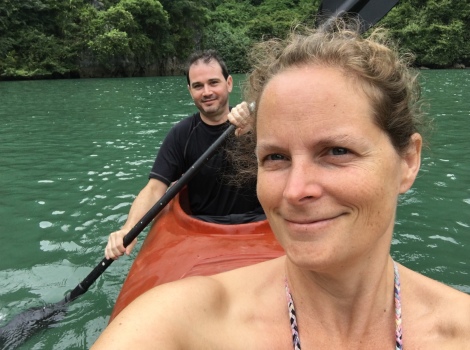 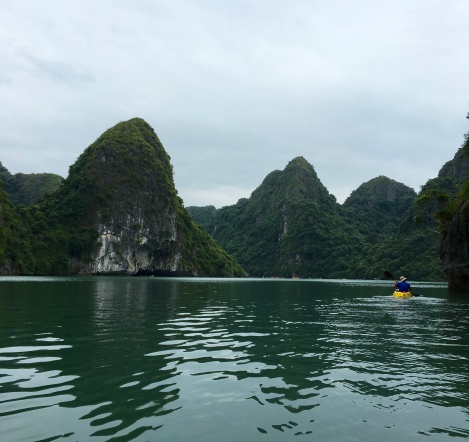 This is what it looks (and sounds) like to kayak in a secret lagoon:

And here’s our kayak entering a tunnel:

This tunnel was a little less scary (it’s easier when you can see what’s on the other side):

And this is what it looks like to emerge on the other side: 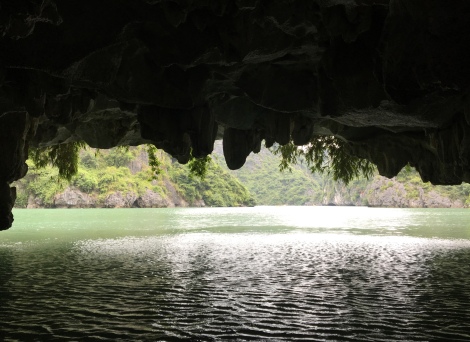 I keep thinking that the cliffs here look like the north coast of Kaua’i. But I that may just be because I’m looking at steep green cliffs and ocean (think Na Pali Coast) – and that’s where the comparison stops. Truly, these cliffs are like nothing I’ve seen before.

When we were back on our boat, we spent a lot of time searching for wildlife.  I’m trying to get better at using my binoculars.  Here are some of the things we saw: 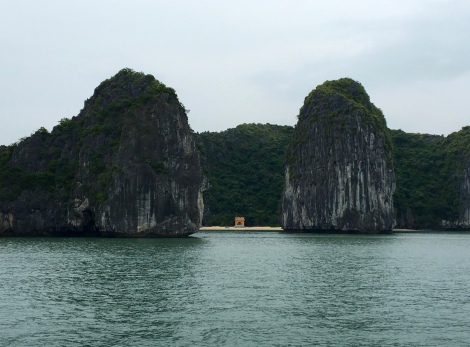 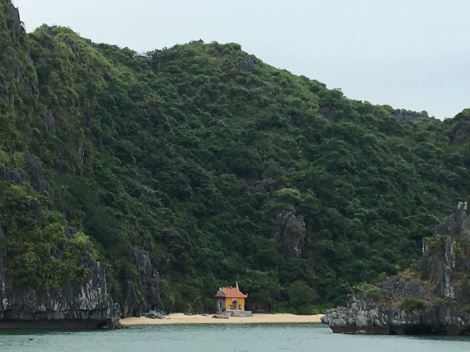 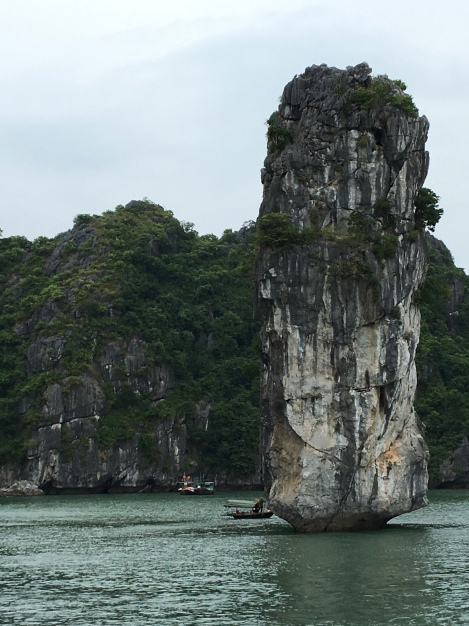 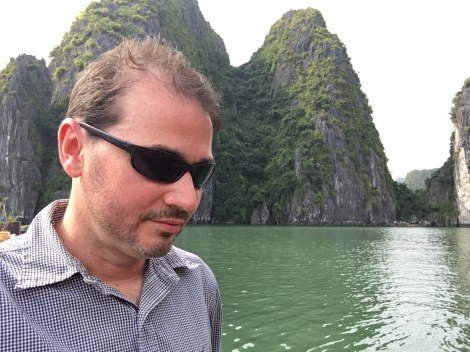 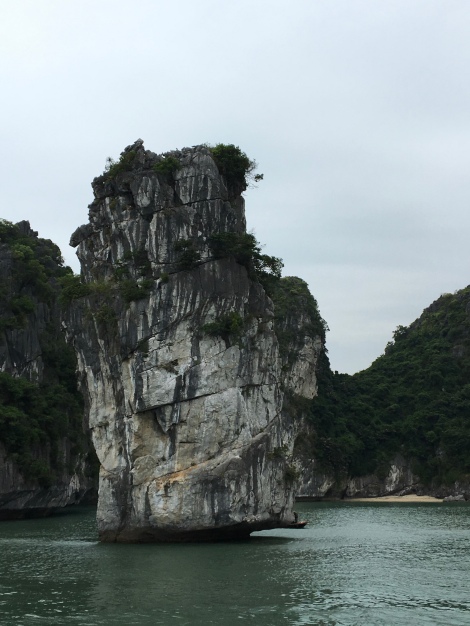 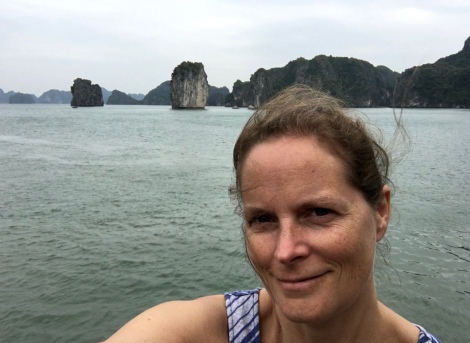 Some parts of this bay are unexpectedly crowded. We made our first kayak outing in the vicinity of many fishermen starting their day, and we took our second outing in the company of about forty other kayaking tourists (though we were able to escape them for a brief moment). On our final outing, however, we paddled for a long time around an area that had almost no people at all. Quyen was very enthusiastic about exploring places he had not been before. So the three of us tied up our kayaks, hiked over a short, very rocky hill, and ended up overlooking a beautiful, entirely deserted inland saltwater lake.

We were very excited about our find — while it was clear by the sort-of trail that other people had been there before, it was also clear that this was the road much less traveled.  So Prescott and Quyen went to portage one kayak; then, while I swam, they traveled by boat along the length of the lake in search of a secret (but apparently nonexistent) tunnel. It was incredible to be somewhere so empty. There’s little I love more than being out in the middle of nowhere with no one else around. And as Quyen’s kayak sped on ahead, I had a chance for some quick skinny-dipping – which is generally a no-no in conservative Vietnam.

The return back to our boat was hard work – we found ourselves heading home in the dark, paddling hard to beat a headwind. But it was worth it. Oh, and we did a little more shopping on the way home, stopping at a local fisherman’s water hut to buy crabs for dinner. 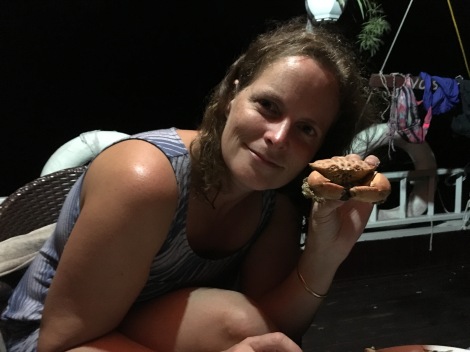 We did spend some time during the day just hanging out: 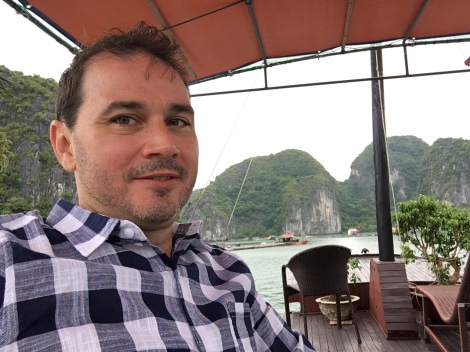 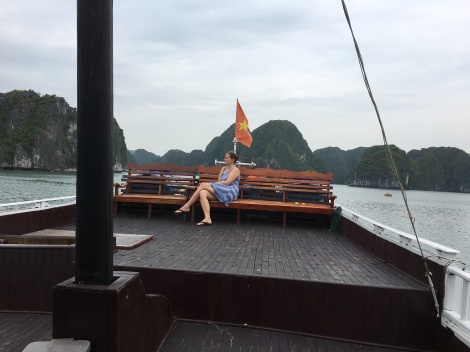 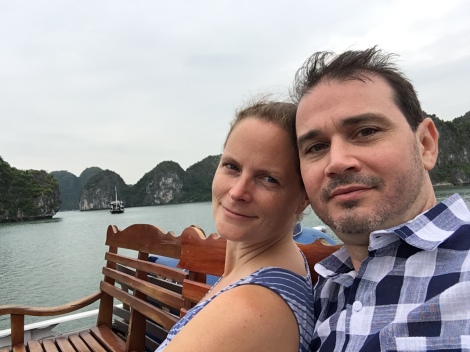 Prescott reported at the end of the day that his favorite things in the world are “jellyfish, little bitey bugs, blisters, sharp rocks, and sandals that have been worn down so they’re not useful for climbing the aforementioned sharp rocks.” If we’re keeping track, my favorite things would probably be (1) the roach-like creepy crawly bugs that seem to live at the base of many of the limestone rocks and (2) the trash that litters so much of the bay – it’s not so plentiful that you see it everywhere, but you can’t really miss it, either.

Oh, and our boat had some serious deferred maintenance problems. These included the fact that our bathroom sink looked like it was about to fall over – and that, rather than draining via the pipe, it dripped onto our toes. And our cabin door really only closed and locked well from the outside. But the biggest issue was the “bang” that sounded during our nap, so loud that I jumped up and yelped. It turned out that the wind had blown both of our windows, panes and frames together, smashing to the floor right next to Prescott. It’s amazing that more glass didn’t break, and that Prescott escaped entirely unharmed.

This is the repair crew (I use the term “repair” lightly — they basically banged the window into place with a board and told us not to move it for the rest of the trip): 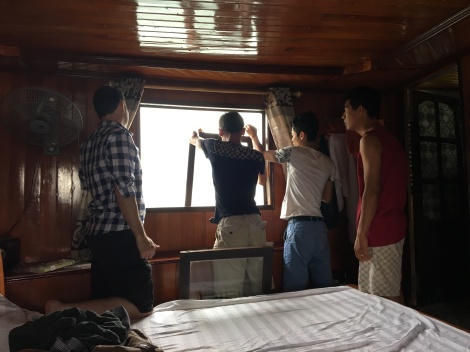 The service on the boat, on the other hand, could not have been better. Quyen was knowledgeable, helpful, cheerful, and bravely adventuresome; our cook was excellent; and our captain seemed to make wise decisions in light of the wind. Everyone was unperturbed by our complete lack of Vietnamese.  It was a delight being out with them.

Overall, I was incredibly happy to be out on the bay. It was so nice to be outdoors, to be smelling fresh air (an entity entirely unavailable in polluted Hanoi), to be sitting out under the dark night sky with the waves lapping and a cool breeze blowing.

And to end with a little entertainment, I’ll share with you the sign on our toilet paper roll: 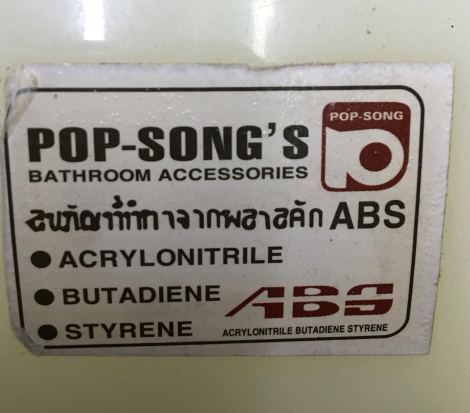