On Sunday afternoon, I went to the Malay Heritage Centre.  This is the first (and maybe the last) museum that I’ve ever been to where they ask you to remove your shoes at the door.

Singapore has several major ethnic groups, and I’m trying to learn get a better sense of their history and cultural contributions.  So I’m making the rounds of museums and heritage centers.  The Malay Heritage Centre is a small space dedicated, according to its website, to “acting as a vital heritage institution for the Malay community in Singapore.”  I’m not sure what it takes to be  “vital heritage institution,” but to my mind, this museum may not be there yet.  It’s a beautiful space with some puzzling curatorial choices.  When you leave a museum with more factual questions than answers, something’s not quite right.

This museum started out with exactly what I was looking for: it asked the question, “what does it mean to be Malay?  Is it geographic (Indonesia, Malaysia, and the enrivons), a language group (which would stretch it from Cambodia to Madagascar), or something else?  Unfortunately, it asked these questions very briefly and then didn’t do anything with them.  My conclusion was that most of the people that we call Malay are actually from the Indonesian archipelago, but it’s possible that I’m confused.

I did learn a few useful and/or interesting concrete facts at the museum:

Other than that, I’m not sure what my take-aways were from my visit.  To my amazement, there was nothing on religion (aside from one display about what people would pack to travel on the hajj).  While I’m pretty sure that the vast majority of Malay people in Singapore are Muslim, there was nothing about how Islam came to this part of the world or how Islam has developed in Singapore.  I would have appreciated that (for example, I want to know why none of the women in the hundred-year-old photos are wearing headscarves, while many Malay women wear them today). There was also nothing in the museum on politics, on how the Malay people have been treated in Singapore or on the role that Malay people did (or didn’t) play when Singapore so fabulously failed in uniting with Malaysia in the 1960s.  I just thought I would see more stuff, be left asking more interesting questions.

All of that said, the museum is in a beautiful building.  It used to be the home of the Sultan (Singapore had a Sultan when the British arrived, and they let him stick around in a puppet role).  The architecture is said to be an interesting combination of Palladian and Malay styles: 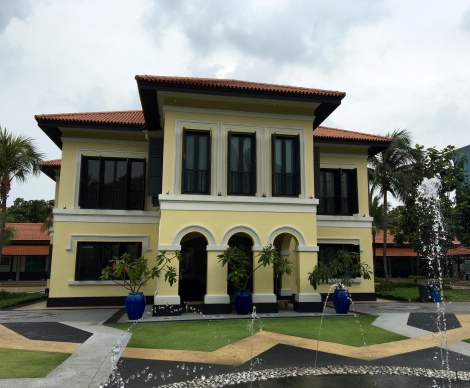 Unless something really special is going on there, I doubt I’ll be returning anytime soon.  But I’m glad I at least went to see it.

One response to “The Barefoot Museum”