I went biking with the Singapore Green Building Council this morning.  It was a little odd to be there without Prescott — he was off seeing an orthopedist about his torn Achilles tendon (he’ll be ok) — but I liked the idea of doing a group ride, and we’d already signed up for the trip.  Here’s a tip for all of you budding event planners out there:  when you say, “meet at the Starbucks,” you should not mean “meet at the place where there used to be a Starbucks.”  Finding the group involved more confusion (and running) than I might have liked — but find them I did, at the place where there used to be a Starbucks, and I rented a bike, and off we rode.

East Coast Park is one of the largest parks in Singapore — it runs along the whole southeastern tip of the island, and boy, is it crowded on a Saturday morning (it starts to clear out by mid-day, because it gets really hot).  The park mostly consists of a long biking trail (you’ll see that on the right in the photo below) and a long walking/running trail (along the coast on the left):

I was amazed by the variety of things that we passed while we were biking.  We saw people camping by the beach, practicing tai chi, playing frisbee, fishing, and flying their drones.  Kids were playing soccer both out on the nearby fields and in some sort of an indoor goal-kicking practice place.  We passed a “bike training area” where little kids can learn to ride, a skate park, a golf course, a giant playground, a sailing center, a beach volleyball net, exercise equipment areas, and a remote controlled car racetrack.  Restaurants and cafes line the park here and there, so you can stop for a break.  I slowed down to watch cranes dredging up sand (maybe for land reclamation — that’s fun pastime in Singapore) and large machines banging piles into the ground below the sea.

There was a beach, too, for most of the ride — though very few people were swimming.  My guess is that the water isn’t great, because there are so many tankers right offshore, but if you wanted to be in the ocean, you could do it. 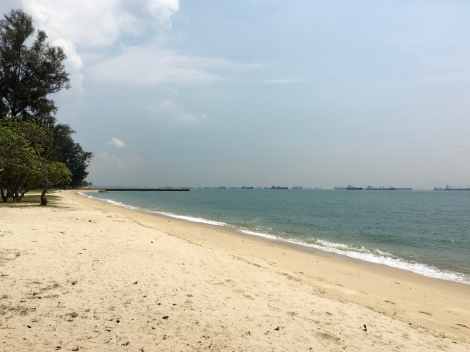 This group of people was using the beach for some kind of an exercise boot camp: 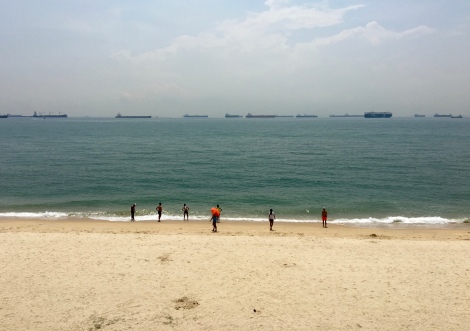 We also passed a bizarre place where you can practice waterskiing or wakeboarding — but instead of being dragged by a boat, you’re pulled by these wacky cranes:

And it’s Singapore, so there are structures all over the place — mostly tables and benches and beach pavilions, but also this thing (I climbed up to the middle section and was even more puzzled about the tower’s purpose once I got there than I had been when I started): 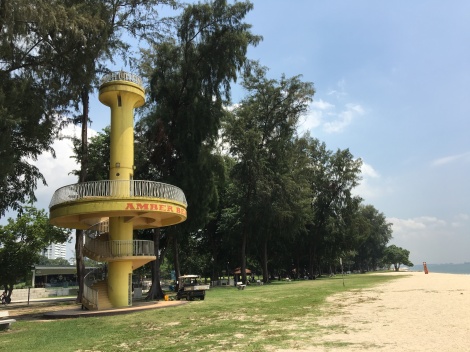 I also found this guy — he looked a little lost: 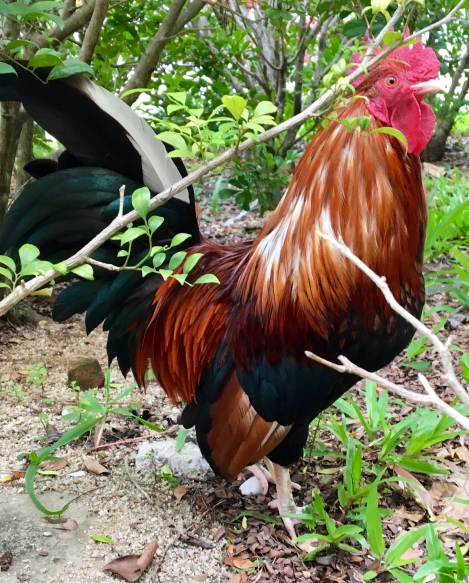 Singapore is deeply concerned about terrorists, drugs, guns, and other such unsavory items breaching its shores, so there are signs like this all over:

You’ll hear people say that, if Singapore is attacked, it’s going to be from Indonesia (which has already had its share of terrorist bombings over the years).  I have no idea whether that’s true, but given that Indonesia is just half an hour from Singapore’s southern coast, I can see why they’ve invested in so many of these signs.

When we were done with our ride, we all went to a coffee shop (not a Starbucks, because that’s not there anymore) to hang out and chat.  I’m still working on understanding the Singaporean accent — it’s tricky, especially when you’re in a loud room — so I’m not sure I learned as much as I could have about green building.  But I did end up in a lively conversation with one guy about politics in Singapore.  He gave me his take on the advantages of the one-party system and the Confucian values that have kept it in place.  He also gave me a little insight into why people say that Singapore is boring — he says that in the US, people go ahead and try things until they’re told to stop; while in Singapore, people don’t try anything unless they’re expressly given permission to do so.  It’s interesting to talk with locals here if you can get everything they’re saying.

All in all, it was a good morning — I’m looking forward to biking there again sometime.

One response to “East Coast Park”