We ended our Thanksgiving yesterday with a visit to the Dining Room at the Cameron Highlands Resort, which is a white tablecloth, dress code kind of place.  It felt Thanksgiving-y, in its own way:  Prescott found mashed potatoes and smoked duck, and the sticky toffee pudding for dessert felt like a winter time treat. Our pre-dinner drinks, on the other hand, looked (and tasted) decidedly tropical. 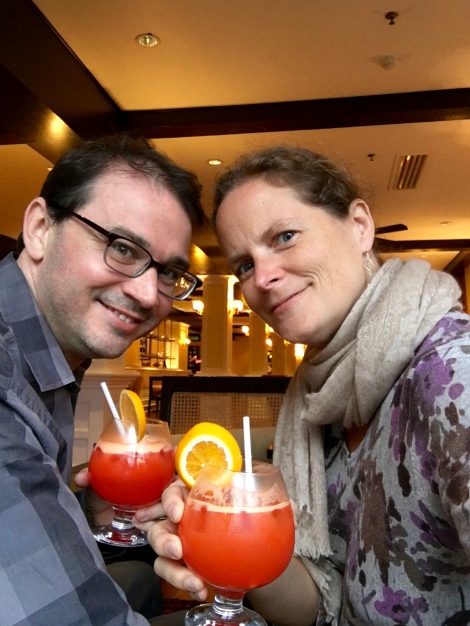 When asking if the restaurant served turkey (which we were told was “out of season”), Prescott explained Thanksgiving to our server as follows:  “It’s a food-based holiday, with a little bit of oppression.”  This earned him a soft kick under the table…

It was odd not to be home for Thanksgiving — we shopped and cooked and hosted at 4910 Morello Road for well over ten years.  As Prescott and I talked over dinner last night, it occurred to us that we’re no longer sure what “home” means.  Baltimore feels like home right now, but will it still feel that way at the end of our time here?  This rootless feeling is common for expats living abroad, I know, and we’re just starting really understand it.

Prescott and I decided to start this morning by taking Jungle Walk No. 1, which goes up the side of Gunung Brinchang, the second highest peak in the Cameron Highlands.  Our goal was the peak here with all of the telecom towers: 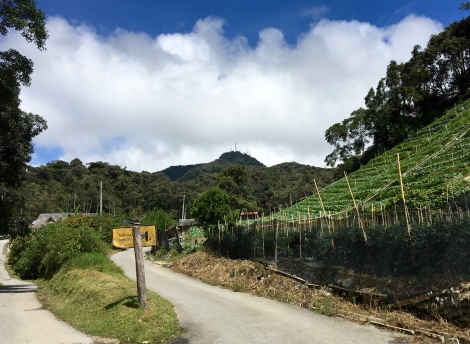 The trail looks innocuous enough at the start; it’s basically just a narrow road that runs along steeply-terraced vegetable farms.  This one had mostly cabbage:

The other side of the field hosted a small cluster of houses.

As you can see, corrugated tin and cardboard are popular building materials here.  But no matter what you build with, not much looks nice for very long; with all of the rain, mold and mildew grow all over everything.

Our trail became very serious very quickly, going up and up and up.  In addition to verticality, the trail’s other primary features were tree roots (for which we were grateful) and mud.  Here’s Prescott working out how to navigate one of many slosh-pits:

But it was a very cool trail nonetheless, with lots of mosses and new flowers (I’d gladly share flower pictures, but I’m waging and losing a wifi battle that makes uploading a painful task).

We didn’t make it to the top — Prescott tore his Achilles’ tendon a month ago, and it’s still healing — but we did find a spectacular overlook. 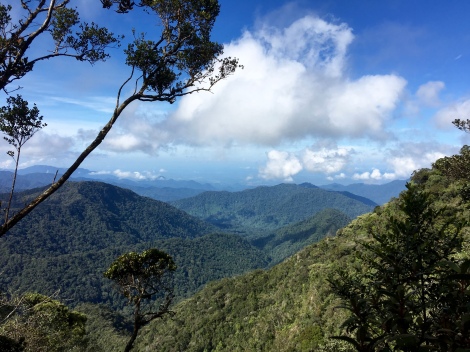 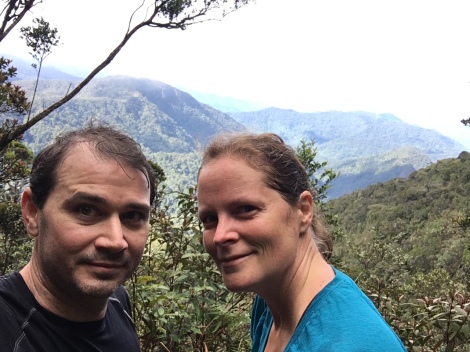 Once we made it to the bottom, we decided to abandon our crazy hotel (the call to prayer woke us up again at 5:14 this morning, and there have been kids playing with what appear to be real guns out in the courtyard for two days running).  Prescott’s final word on the place was, “prayers and guns and loud people and bad service — we might as well have stayed in the US.” 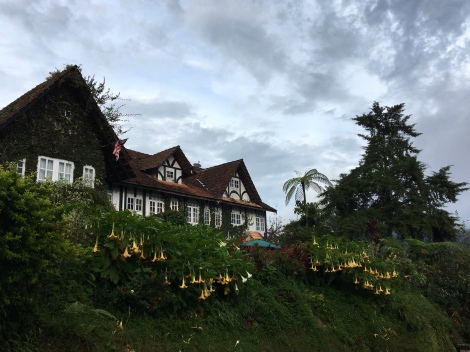 The place looks quaint from the outside, but my, were we glad to take our leave.

We had lunch in Tanah Rata, the most touristy of the hill towns up here; we ate Indian food served on banana leaves: 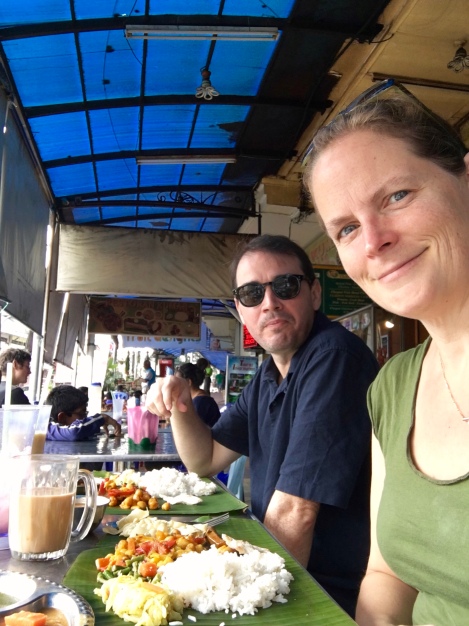 We then continued driving down the road in search of a new hotel.  We decided to splurge on the Lakehouse Hotel, a wonderfully satisfying place.  Note the Tudor architecture, which is ubiquitous around here, whether the buildings are actually old or not (our first hotel was built in 1934; this one opened in 1970).

I spent the afternoon reading out on the verandah and watching wonderful cloud formations. 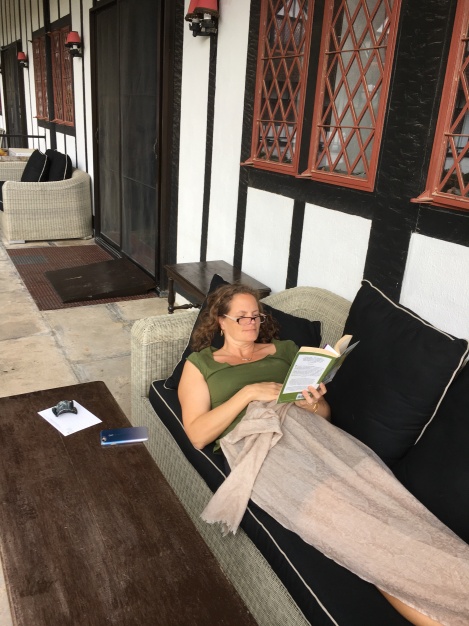 The hotel overlooks a reservoir that is a particularly awful shade of brown.  I gather that it used to be much nicer, but deforestation has taken its toll.  Apparently, as the demand for organic veggies has grown in a wealthier Malaysia (and probably Singapore, too), farmers up here have cut down acres and acres of trees.  This means that while they have lots and lots of greenhouses, there are no roots left to hold down the soil.  So when it rains —  which it seems to do every single day — the mud runs down the mountains and straight into the rivers.  This led to a disastrous “mud flood” two years ago, and the problem continues regularly on a smaller scale, se the rivers and lakes are all silty.

Prescott and I took a drive to the tiny town of Ringlet in search of scones and tea.  Sadly, we did not find the cafe we were looking for, but we did stop at a street vendor for some delicious fried sweet potatoes and banana dough balls.

As we wandered the back streets (which earned us a lot of stares), we noted that Malaysia has lots of stray cats and dogs (and litter).  For those of you who are tired of my flower posts, I thought I’d share a few cats: 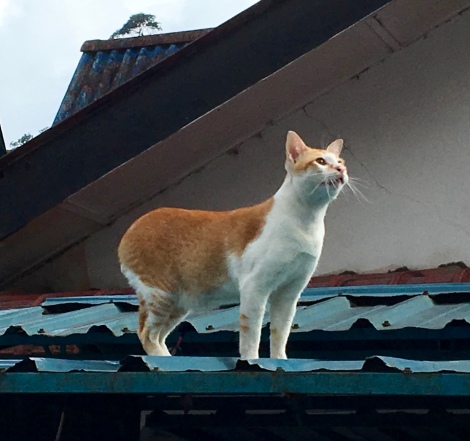 One response to “Higher Up in the Highlands”