Ipoh has too many things to blog about in one day — not only does it have art and food, but it has giant caves dotting the mountains that surround it.  People have built temples in several of these caves, and the biggest ones have turned into both prayers sites and tourist attractions.  The first one we visited was Kek Look Tong, by far the largest and most famous of the bunch.

They’ve developed this particular cave pretty thoroughly, scattering statues (sometimes with altars, sometimes not) throughout.  The statues are mostly of Buddhas and bodhisattvas:

For some reason, they even have an oddly-carved fountain in the shape of a merlion, which is the national symbol of Singapore (yes, we have our own mythological creature, created by a British guy in 1964):

There are areas where you can get right up close to the cave features — it’s wonderful, if a little scary when you stop to think about how unprotected these beautiful geographic formations are. 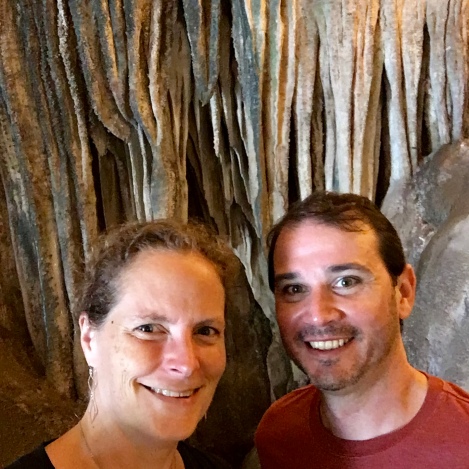 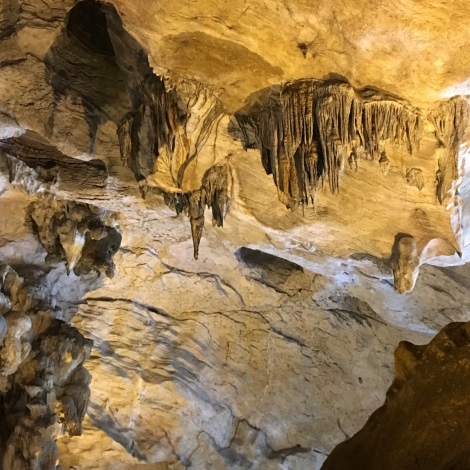 Whoever manages the cave (that remains a mystery) has made a few attempts at preserving it.  For example, you can’t make a bed and lie down there (though you may sit back-to-back with a friend):

And you most definitely may not bring your pet bunny rabbit: 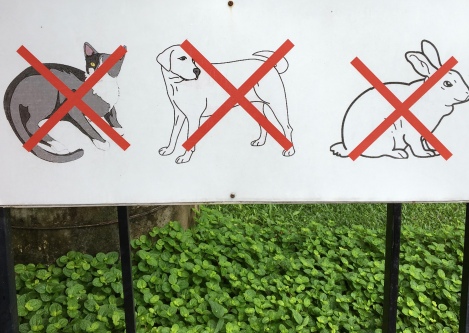 Have you ever seen a “no rabbits” sign before?  We’re still trying to figure that one out.

Outside the cave entrance, someone maintains a large and spectacular garden:

The area is populated by geese …

…and by monkeys (as you can see, I can spend a lot of time watching monkeys — I find them endlessly fascinating).

Our next cave exploration took us to Ling Sen Tong.  It was a little hard to know at first whether to properly characterize this set of caves as a temple area or as a playground.  I got to ride a little elephant…

…and a big elephant. 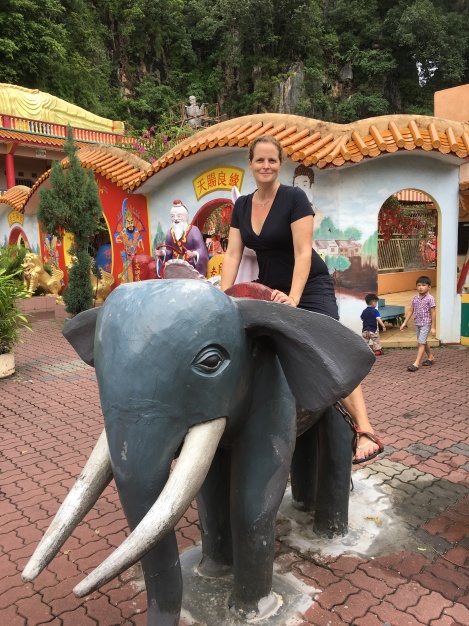 The only reason I did not ride the big pink winged horse is that it was already occupied by a little girl in a princess dress.  Prescott made friends with a water buffalo.

There was a remarkable amount of delightfully kitschy statuary.  It might have been appalling if it hadn’t been so cheerful.

We did find actual temples, both of which are built up against and then into the rock.  This one looks to be the newer of the two:

Those things in the temple that look like upside-down baskets are incense cones.  Part of the way that these temples make money is by charging visitors to burn incense.  Of course, since these temples are built into caves, this wreaks havoc with the cave interiors — they reek and are black with soot.  It doesn’t look like a sustainable practice.

The other temple looks older (or maybe it just hasn’t received a new coat of paint). 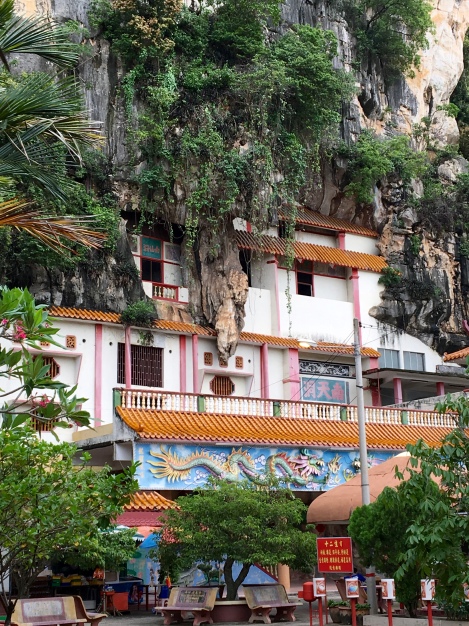 I think that this is the first temple that’s ever made me laugh when I walked inside. 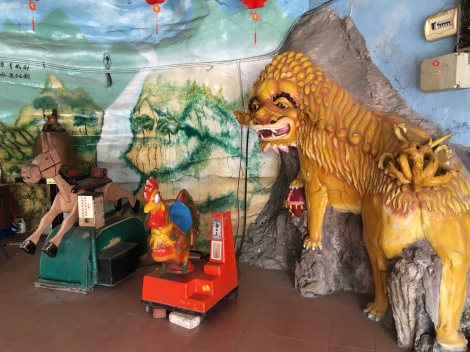 Prescott doesn’t like temples, but I made him come in just to see the donkey and the chicken.  Oh, and when you turn around, you find this guy: 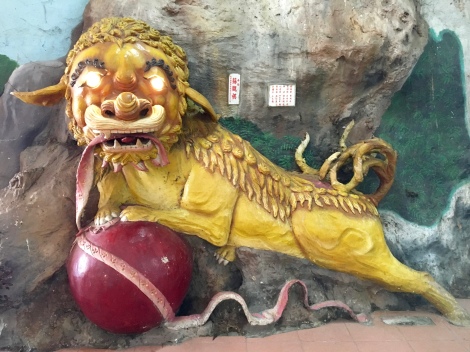 It was hard to take this place entirely seriously at first — it was like entering a funhouse from some sort of a creepy movie.  But as I walked deeper into the cave, it was clear that this really was a temple.  They’ve painted all of the cave walls white (which is a shame). The main altar is tucked right into the hillside.

There are impressive wall decorations, from this dragon (note the black ceiling — that’s soot)… 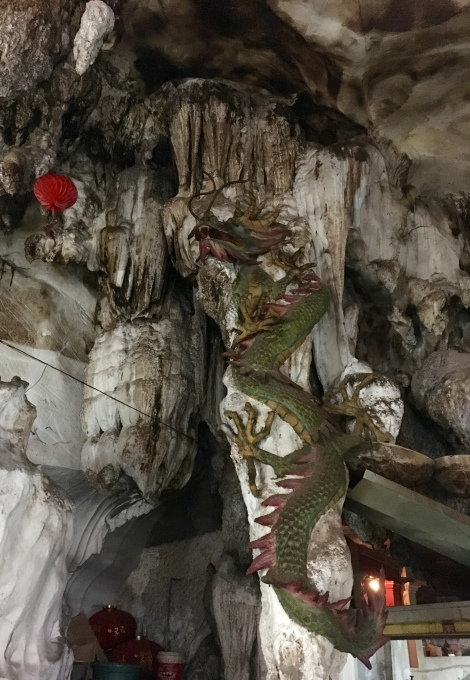 … to this dragon-riding lady (I love how much this looks like a wall hanging, when it’s actually a cave painting)…

… to this guy with the green ox/cow/unicorn (another cave painting): 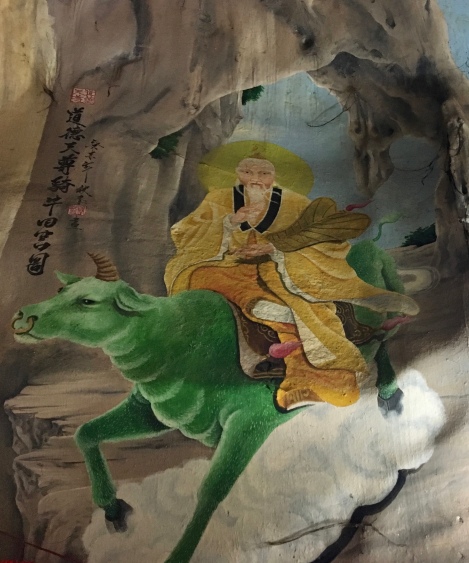 There were all sorts of narrow staircases that you could climb in this building, some of which took you up multiple stories to tiny rooms with tiny altars, and one of which climbed up, up, up, through the cave.  It was quite an exploration; I needed my flashlight for part of the stairs, which were in the pitch dark (in the US, this would all have been considered one giant liability hazard). I eventually found myself in an enormous (mostly dark) cavern, and when I walked through, there was a small window out the other side that gave me this view of suburban Ipoh:

Once I was downstairs and back outside, I found this statue:

What’s with the green ox/cow/unicorn?  I’ve tried Googling it, to no avail.

We left Ipoh in the pouring rain.  This is the first time I’ve ever been handed an umbrella to walk across the tarmac (which begged the question, “why was the plane so incredibly far from the door in an airport that’s not much bigger than half of an average city block?”).