On Wednesday, we went out for our big adventure into the wilds of Borneo (or as wild as you get when someone has already made trails for you). Our object was Bako National Park, the oldest national park in Sarawak.  (Sarawak is the name of the Malaysian side of the island Borneo, for anyone still working on their Southeast Asian geography.)

We drove about forty minutes north from our hotel in Kuching to the park entrance, which is really just a building and a boat jetty. You can only access Bako National Park via small bumboats that ferry people up a river and across a short section of the South China Sea, so to get to the park, you buy both a entrance pass and a much more important boat ticket. Because it’s monsoon season, they only run ferries twice a day, at 10am going out and at 3pm returning. But we didn’t know that – there are no monsoons in sight, and our guidebooks said that boats would start running at 8:00 – so we arrived at 8:30 in the morning and then had a bunch of time to kill.

We spent most of that time in a roadside café about a hundred yards from the national park entrance. But it might as well have been worlds away – we were the only tourists there, I was the only woman, and it was as small-town a kopitam (coffee shop) as we could have hoped for.

Just behind us was the path to the restroom.  Neither of us was feeling adventuresome enough to try it. 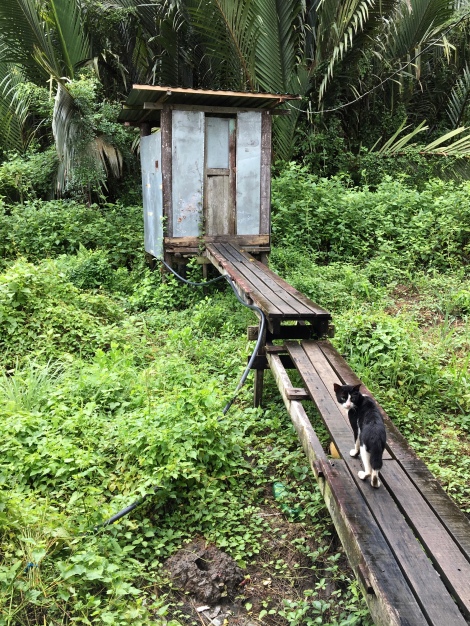 We made it back to the national park boat ramp with minutes to spare (it turns out that when they say, “the boats will leave at 10:00,” they really mean, “the boats will leave at 9:30 or whenever the boat captains feel like it). The boat ride to the national park was surreal – it was low tide and rainy and foggy, and there were men out on the tidal flats looking for shellfish who looked like they were walking on water. The local fishermen were also out for the day.

Soon into our ride, it started raining hard enough that we needed to pull out our ponchos and hunker down.  About fifteen minutes later, the boat slowed, and we were told to take off our shoes. This was a surprise, because we were still out in open water and there was no boat ramp or arrival sign in sight. But the boat stopped anyway, and we hopped out into knee-deep water and walked across a long stretch of mud-sand to get to the park headquarters.

Here’s our boat and our captain at the landing spot:

The sand along the way was beautiful…

…and the crabs made it more beautiful still. 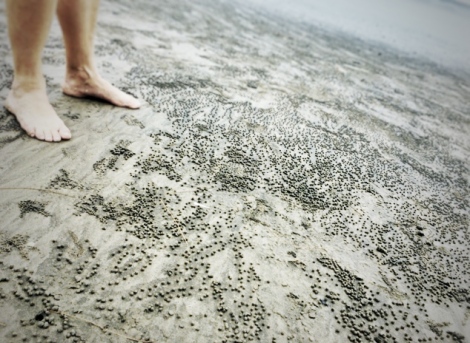 This area is known for its rock formations and sandstone cliffs. 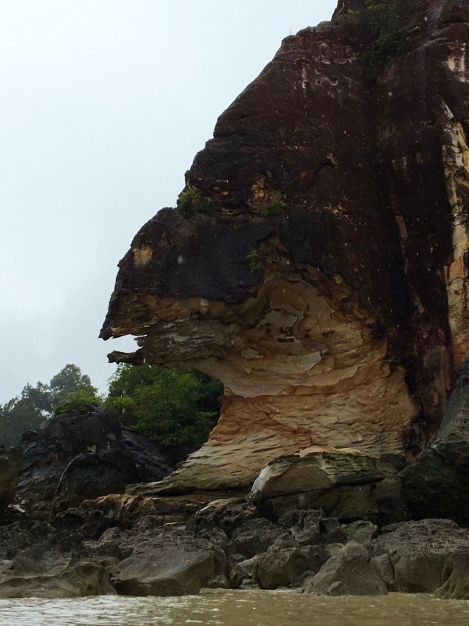 Bako National Park is both quiet and empty; there are no roads and no cars, and I’m guessing there were no more than about a hundred people in the entire park. We started seeing wildlife within five minutes of moving past the shoreline: this pit viper was asleep on a bush.

The big attraction of this park is the proboscis monkey population. Our guidebook offered a few trail suggestions for sighting them, so we set off in search. And then we were in the wilds!

Our first trail took us up, up, up a hillside to a rainy view of the beach (by this point, we had nearly abandoned our ponchos and were just getting wet – only the backpack stayed dry). But there were no monkeys to be seen.

Our second trail meandered along a boardwalk through the muddy peat swamp forest and jungle, where I noted that a lot of the vegetation is mean. You have pokey plants… 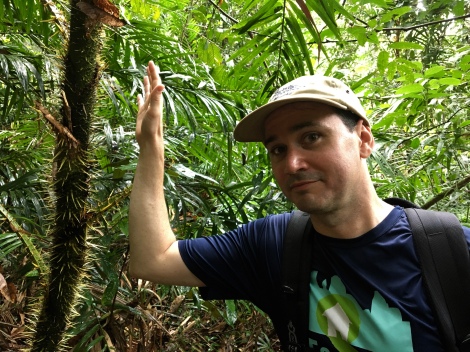 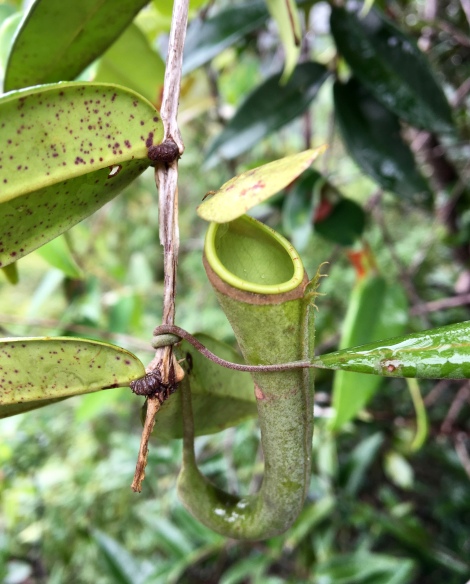 We went up and down in the forest, eventually coming out onto a mangrove-filled tidal flat.

It was amazing to walk there, to look at more sand patterns and a few beautiful shells and the little mangrove roots.  Aside from one fishing boat, we were the only people in sight for what looked like miles. 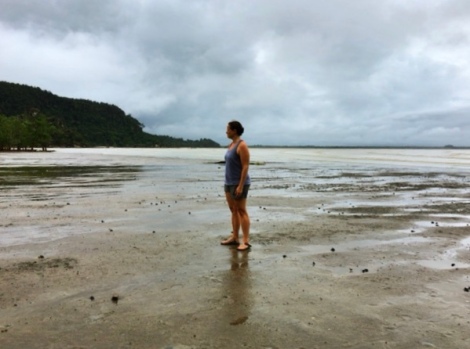 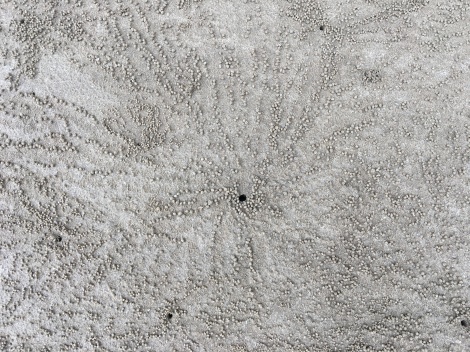 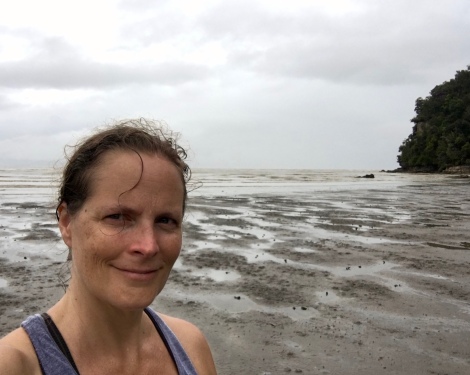 We also saw mud skippers actually skipping at the edge of the water!

Back on the trail, we think we saw a silver leaf monkey way up in the treetops, but our proboscis monkey search continued to meet with no success. That didn’t keep us from whipping out the binoculars on a regular basis. And when our trail took us back down to the central headquarters area, we saw plenty of monkey warnings:

These signs are for the macaques, of course — they’ll steal anything that looks like food. The proboscis monkeys just stick the trees.

We got our first face-to-face look at a Borneo boar, best known for their amazing whiskers:

And we found a baby monitor lizard: 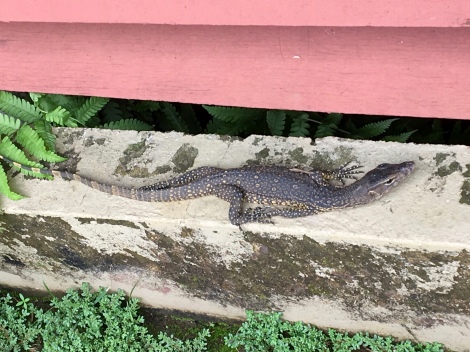 Not long after that, we saw a large group of macaques looking through a garbage area. And then the trees above our heads started to shake, and Prescott sighted our first proboscis monkey!  We saw at least one female and three male monkeys way up in the trees, too far away to photograph, but close enough to know who was swinging and who was eating and who was grooming. We watched them for quite a while.

Then we set out on our final trail, which took us up through the rain forest to a moon-like ecosystem that reminded me of Volcanoes National Park in Hawai’i (I think this was the keranga, or heath forest, but I’m not sure). The vegetation was low, and the trail was largely made up of wet, very compacted sand.

We hurried back down to catch the 3:00 boat, only to find that the boat captains in Bako don’t have much of a sense of time (they were early in the morning and late in the afternoon). So we went to spend a little more time watching the proboscis monkeys – we saw at least five this time. This guy did us the favor of coming down very close to us to snack. It was incredible to have him there right in front of us. 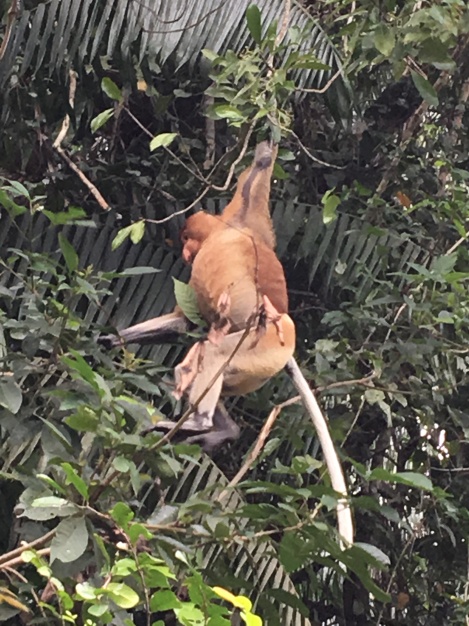 I can’t get over how strange their faces look – they remind me of something out of The Wizard of Oz.

Our eventual wait for the boat was very peaceful, with a view of the jungle in one direction and the sea in the other.

I liked that the wooden staircase on which we were sitting had been built with carved posts (and I wondered from what building these might have been recycled, or whether they had just been on sale somewhere). 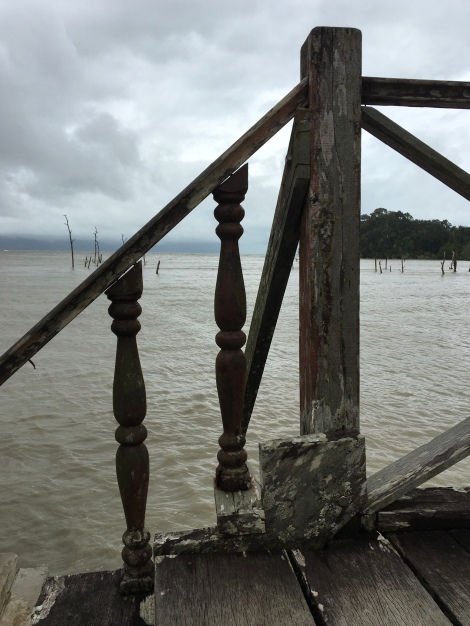 The boat ride back to our car was exciting, to say the least. I had heard it would be “bumpy,” but I hadn’t realized that our six-person bumboat would be rolling around in waves easily taller than the boat itself. It was a white-knuckle adventure ride – the first time I’ve ever been truly grateful to have been told to wear a life jacket.

Once we returned to the river where we’d started, the vast difference between low and high tides became immediately apparent. At the beginning of the day, I’d wondered why the fishing village across from the jetty had been built entirely on the mud, and why the boats were all out of the water. 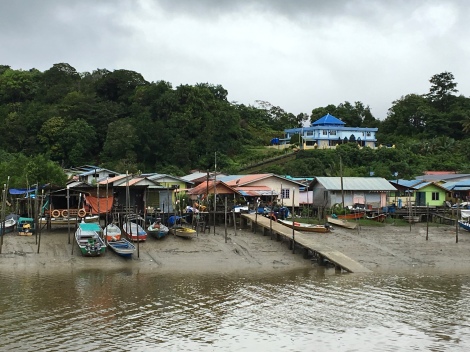 But on our way back, we could see that high tide makes all the difference (and that it’s imperative to have houses on stilts):

Here are the views from the pier at the end of our ride (our boat is the one on the right, and our intrepid captain is the guy in the life vest): 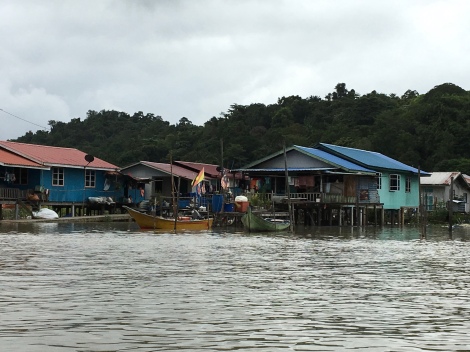 What a great day! Even in the rain (I’m not sure we were ever fully dry), it was a spectacular adventure.