We took on the big one today:  Angkor Wat, definitely the most famous of the tens of Angkor sites.  This is the one on everyone’s bucket lists, the one on the Cambodian currency, the one to which you refer when you say you’re coming to Cambodia.  Why does this temple get so much of the press?  Well, it’s the tallest, and you experience it from the expanse of a park-like landscape.  In a word, it feels vast.  It also has the best-preserved detail and bas-relief (as J says, “they basically made wallpaper on stone with their little chisels”), so there’s a lot to see.

Angkor Wat was built either as a temple or a tomb, no one knows for sure, and it may have been both.  You can definitely feel that kings spent time being important there. 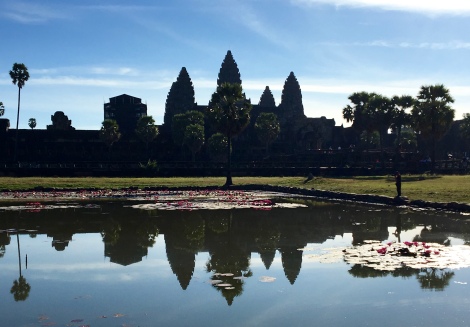 They’re doing some restoration on the small tower on the left, which is why it looks like a small Swiss chalet invaded the temple complex. 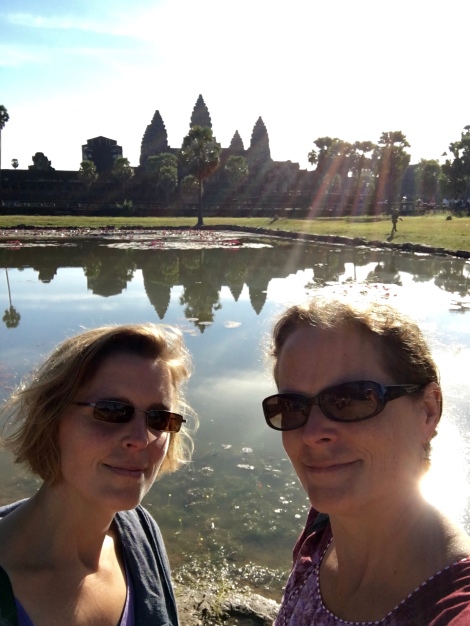 The approach is across a moat and along a broad lawn, which involves walking on an entrance causeway with a thousand of your closest tourist friends. 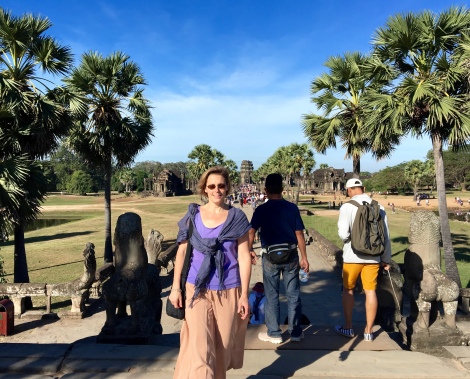 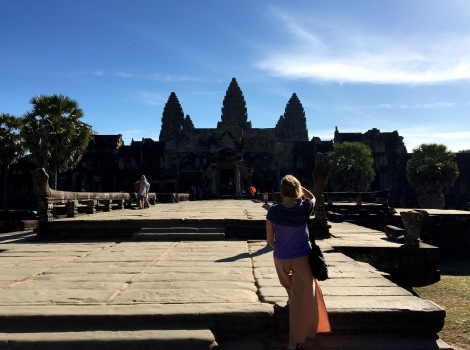 Fortunately, there’s enough space within Angkor Wat itself that you only feel claustrophobic in a couple of boWe started our visit in the Hall of Echoes, where there are tremendous reverberations if you thump your chest (sorry, but all we captured on video was the sound of people talking loudly in Chinese).

We then veered through the Hall of Mosh Pits (Jocelyn’s name) to the Gallery of Bas-Reliefs, which is an incredible display of wall after wall after wall of carving.  Most of the carving depict battles — some historical, most mythological.  Angkor Wat has virtually no signage — but fortunately, we brought along a guidebook (thanks, SAS library!), so we were able to follow along.  We learned stories like the Churning of the Ocean of Milk, in which Vishnu eventually turns himself into a tortoise to keep a mountain afloat and help gain immortality for the gods.

We saw Hanuman, the monkey god…

… and Brahma astride his goose…

… and Vishnu riding a goruda.

There’s also an entire wall that depicts the monkey vs. demon battle from the Ramayana.  It’s all about the monkeys’ teeth vs. the demons’ spears. 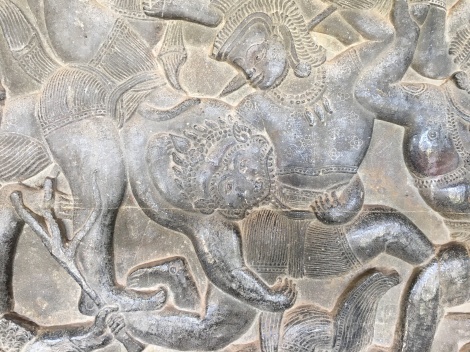 Here’s the head demon, Ravana, if you want to know what the monkeys were really up against (he has twenty arms and ten heads, for starters):

When the Khmer weren’t thinking about war, they were thinking about women (some things don’t change all that much).  Angkor Wat is also know for its very fine asparas, the carved women who grace nearly all of the Angkor temples.

The presence of these voluptuous, bare-breasted women begs the question why modern day female visitors to Angkor must cover their shoulders and knees, but I won’t belabor that point.

And of course, there are the towers of Angkor Wat. 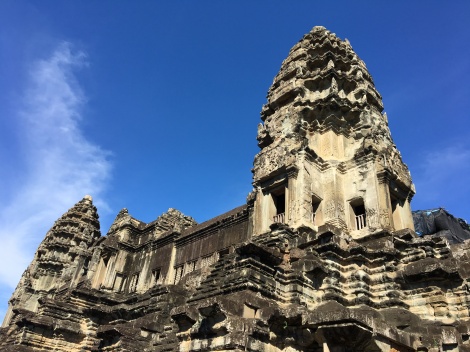 The towers are magnificent because — while much of their detail has been lost — they are tall and have no competing scenery (Angkor Wat has no trees).  But we declined a visit to the very top level because the line to get in looked to be over an hour long.

Instead, we enjoyed the view from the level of the hoi polloi (only kings and priests were allowed on the top level in the time of the structure’s heyday). 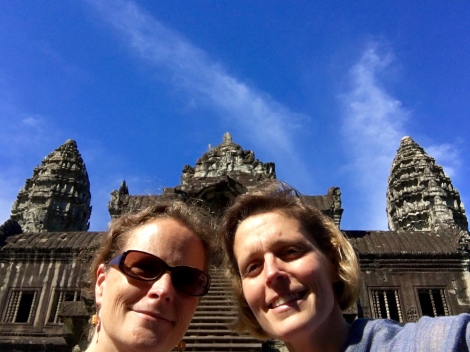 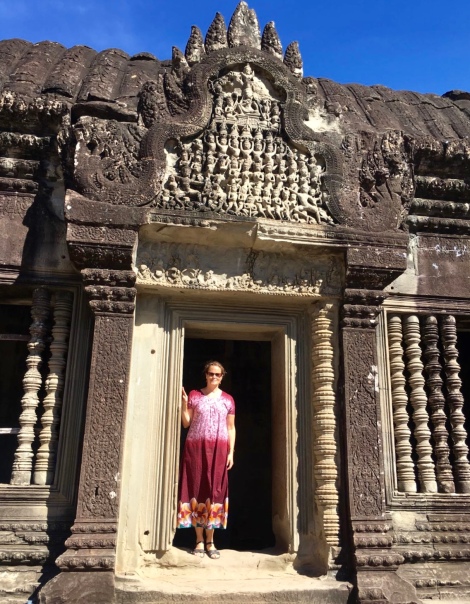 The roads around Angkor were even dustier today — I rode backwards in our tuk-tuk, and we both made good use of our scarves. 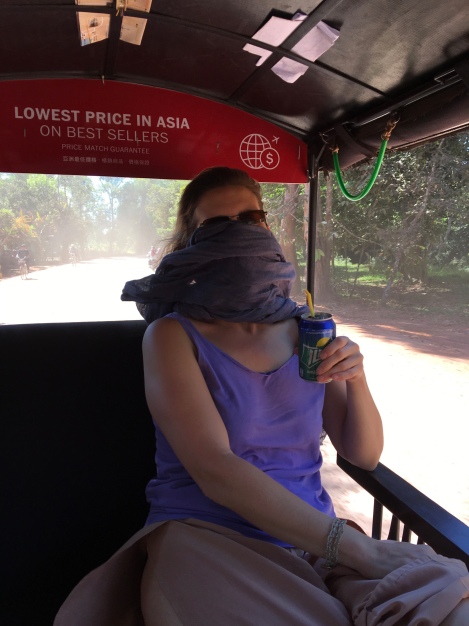 Our next destination was Ta Prohm, a temple that was a major site when it was built nearly a thousand years ago.  At its height, it had a staff of 615 dancers!  The complex was in ruins just ten years ago but has now become a serious restoration project.

This temple had some significant crowds — it’s a popular place on most temple tours: 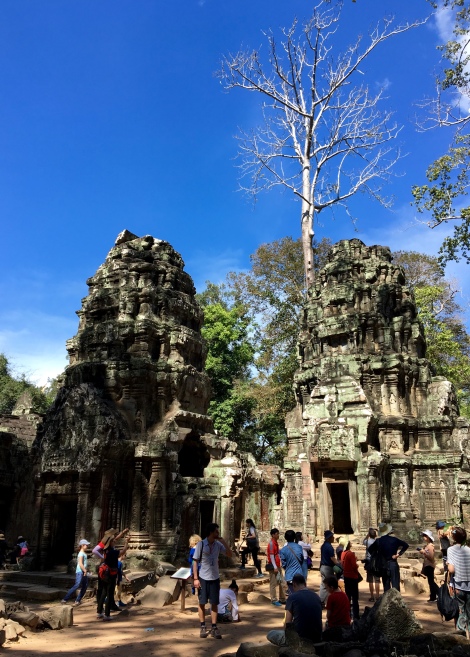 It’s in much better shape than we expected, but you can still find lots of piles of temple rubble. 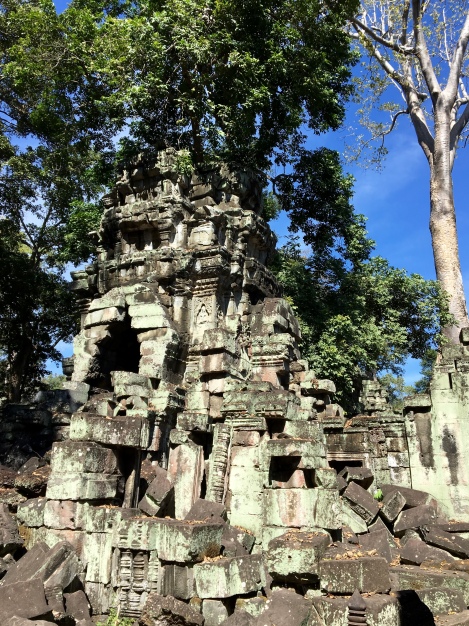 But one of the things we like most about these half-ruined jungle temples are the trees, which grow over and through everything. 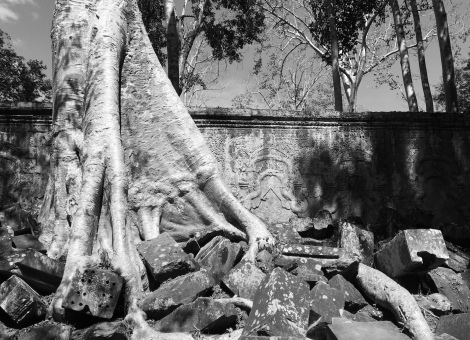 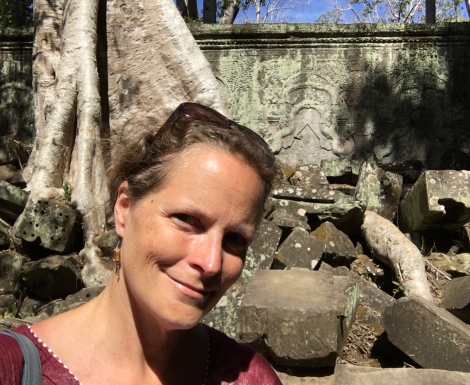 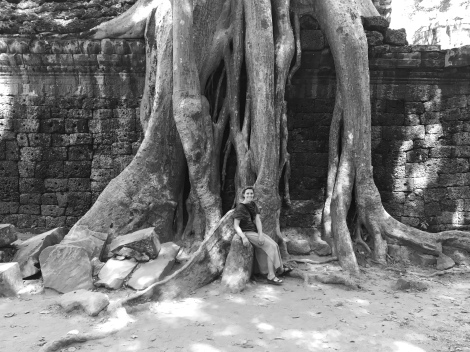 One of the exciting things about leaving some of these temples is trying to find your tuk-tuk.  Some of the parking lots are filled with endless number of them, and you’re never sure where your driver might have decided to park. 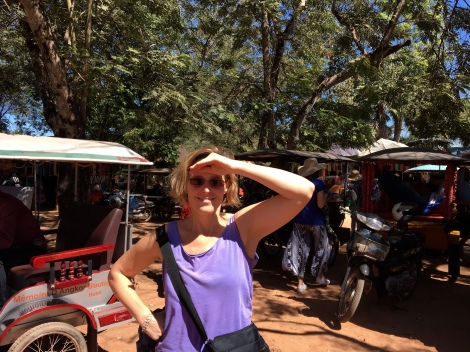 Our last temple of the day — and our favorite — was Banteay Kdai.  Monks pulled most of the weeds at this place, since it was an active monastery until the early 20th century, so it doesn’t have any trees growing out of it.  And a herd of dangerous wild deer (seriously, that’s what our guidebook says) occupied the place in the 1960s.  But the monastery is falling apart anyway due to faulty construction techniques (no keystones in the arches, no horizontal joints, weak sandstone).  It’s a beauty.

When you enter, you see this gate with these faces on top:

Then there’s a long, sandy-dusty walkway where you can stop to swing on a vine:

And then you get to this view:

J stopped there, since her tummy still is not happy with the world.

While I went on to investigate faulty construction techniques:

And lots of rooms with no walls or roofs:

There’s a contemporary Buddhist worship site at the front: 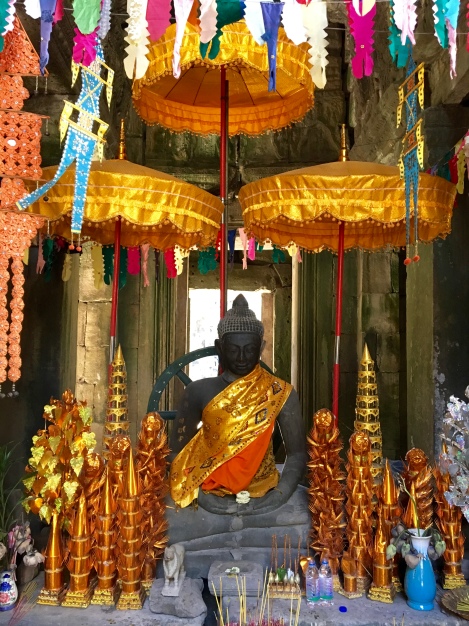 And this gate just beyond it:

J and I spent the afternoon resting by the pool at our hotel. 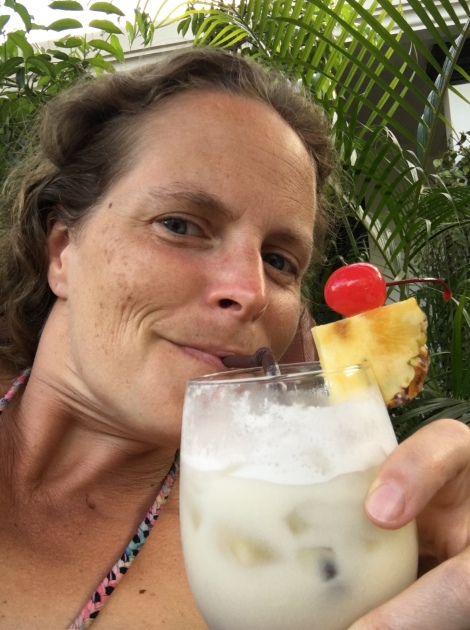 I made brief jaunts out alone for lunch (a very authentic papaya salad at a hole-in-the-wall spot) and for dinner (a delicious Khmer curry at Khmer Kitchen) — J is still unwell, though she has declared that she will be better tomorrow.  I hope she’s right!