I’ve been in China! Last week, I spent five days in rural Fujian Province on an Interim Semester Trip, part of the curriculum at Singapore American School. In February, every SAS student and teacher journeys somewhere for a week-long travel experience. My particular trip was named “Cycling and Service in a Hakka Village.”

Who was in China with me? Well, I had twenty sophomore boy in tow, most of whom signed up as a friend group for this particular travel option. Then there’s Jeremy, a history teacher who is also new to SAS.  Here we are at the beginning of our adventure at Changi Airport in Singapore:

Providing us with guidance throughout our trip were Gary and Vincent, guides for the fabulously-named “Global Sapiens” tour group that ran our program.

Our trip started with a flight into Xiamen (once known as Amoy) where we hopped on a small coach bus that would take us up into the mountains.

We wound through the city and its extensive suburbs, through small banana plantations and rice paddies, up to small tea terraces and bamboo groves. Eventually modern houses gave way to older structures, though we sometimes saw Potemkin-village-like things such as this giant arch to nowhere:

Our bus finally dropped us off at the base of a small village, Ta Xia. We walked up the main street (all the while getting honked at by enthusiastic motorists), taking in our surroundings:

And then we made it to the doorway of our tulou, the Taxia Village Weiqun Lou: 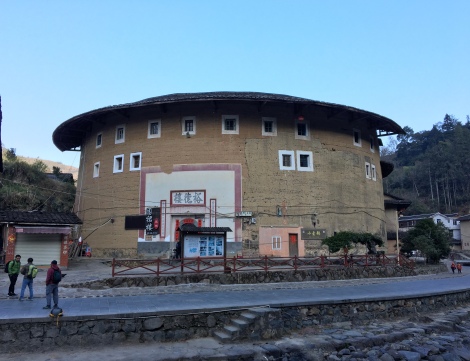 Tulous are large rammed-earth structures found only in this area of Fujian Province.   I can best describe them as well-fortified early apartment buildings – they could house up to 800 people inside of their tall, nearly-windowless walls. Families lived in vertical arrangements, with the kitchen on the first floor, storage on the second, and personal living space on the third and fourth floors. The central courtyard was a communal area that included wells and an ancestral hall.

The Hakka people started building tolous in the eleventh century and continued building the right up until the early 1900s. They were nearly unknown to the outside world until, legend has it, the US government took aerial photos of them in the 1980s and worried that the circular structures might be missile silos.

The tolou in which we stayed was over 200 years old, but much of it burned down in the mid-1900s and only part of it (the wooden part below) has been rebuilt.  So compared to a lot of more intact tolous in the area, it looks incomplete.

This Tulou would have housed over 100 people in its heyday, but it’s now been converted into a hotel. The rooms are small but serviceable. After the sun goes down, though, it can be terrifically cold (especially for those of us who are used to Singapore weather) – there’s no insulation and no source of heat. I’d almost forgotten what it was like to have a hard time getting out of bed because of the cold … It’s amazing to be in an uninsulated, wooden building when it’s 39 degrees outside. And the water in our rooms may have come straight from the mountain river that was right across the street.

But some of the tulous (not ours) have been named UNESCO World Heritage sites, and the people in the area are starting to figure out how to take advantage of that designation. This nearby tulou cluster has been gussied up with bright lights: 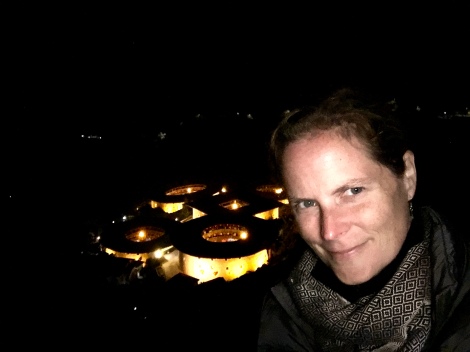 The village of Ta Xia houses at least five tulous. The village itself is charming, with most of the buildings lining a river: 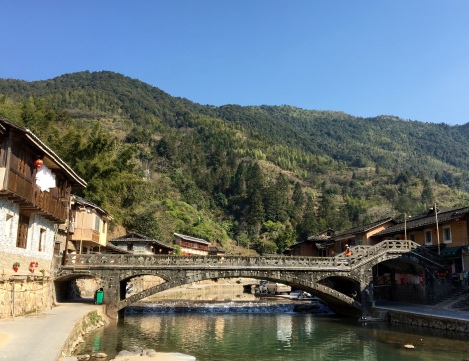 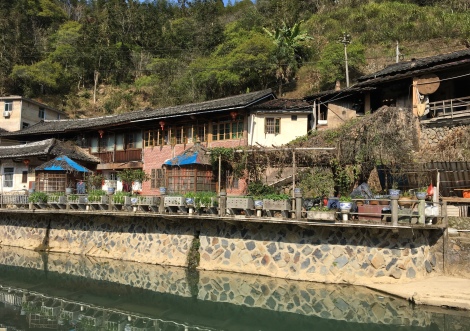 While this section of China has become increasingly developed over the past ten years, there aren’t enough tourists to support a huge infrastructure. Our village was pretty far off the beaten path, so aside from a few restaurants and hotels (and a convenience store where our boys bought every pack of Cup of Noodles), it felt very traditional. You could find women washing laundry in the very-cold stream; there are warrens of twisty alleys behind the buildings; and people hang laundry out in the open air to dry.

I should note that the language barrier in rural China is very real; I’ve been able to muddle through using English in the other countries I’ve visited this year, but I managed to do no muddling whatsoever in China. My Chinese is nonexistent, and people out in the country speak nothing else. It’s a fascinating challenge. I’m not sure how I would travel to this area without a guide.