Edinburgh’s sightseers spend most of their time traveling up and down The Royal Mile, a street that takes you from Edinburgh Castle on one end down to Holyrood Palace (the Queen’s place) on the other.  It was once the main thoroughfare through the city.  Our college counseling group was offered a tour on of the road our last morning in town, and despite the bone-chilling wind, about twenty people showed up for the fun.

We started at Edinburgh Castle: 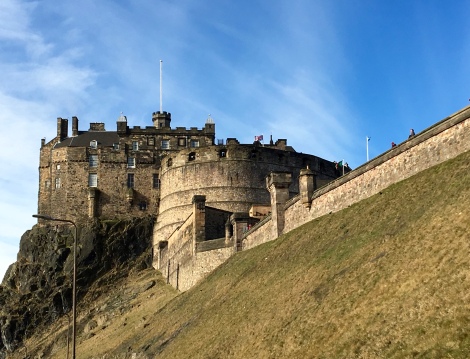 The structure has changed a lot since it was first built up on this rock in the twelfth century (for starters, you would not have had a huge parking lot/esplanade leading up to your giant defensive tower).  But it’s still a stunning sight. 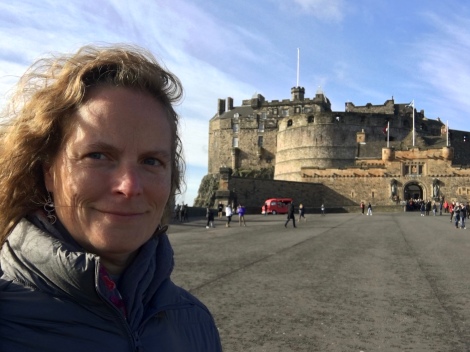 As you walk down the main street, you pass shops and apartments and churches.

Here’s a view down that street in the opposite direction (as you can see, the buildings and churches can have a certain sameness about them):

The three main streets of the old city are long and fairly wide, but when the city was founded, there were no cross streets at all — people got around using a series of tiny alleyways and closes.  So the church below sadly had both of its sides chopped off when the town decided that to remedy that problem in a grand road-building endeavor in the 1800s: 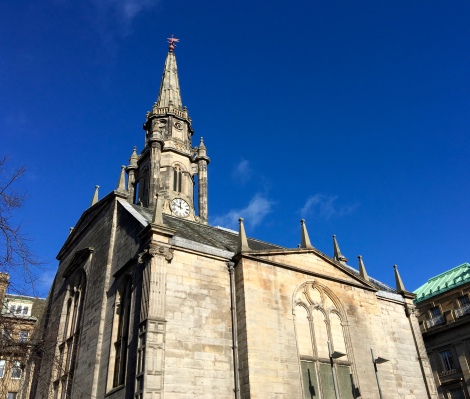 The shape of this church fascinated me — I know nothing about this architectural style:

I spent a long time in St. Giles’ Cathedral, sometimes called the Mother Church of Presbyterianism and now a centerpiece of the Church of Scotland.

One of my ancestors (or someone I might try to claim as an ancestor) stands right outside the front door):

I loved the ceiling decorations: 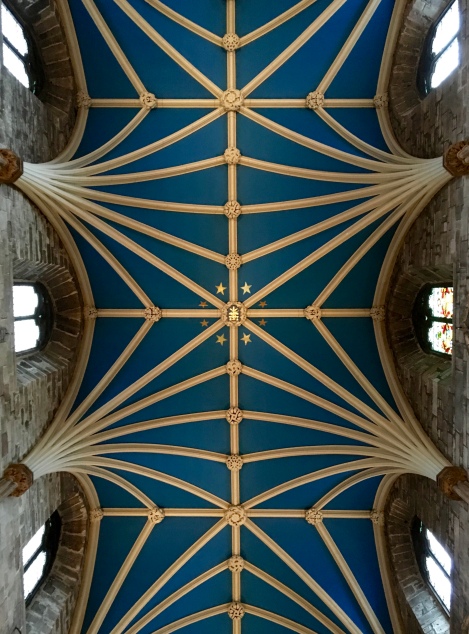 And the attention to detail: 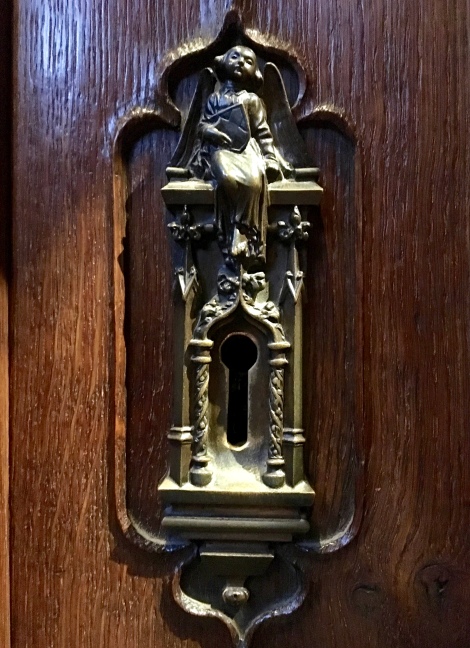 As you walk down the Royal Mile, you pass all sorts of old things, from monuments (this one was dedicated to the Scots killed in British India — hence the elephant) … 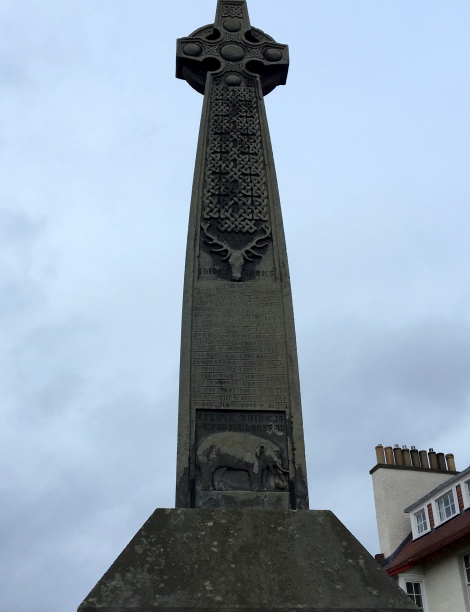 … to a unicorn (Scotland’s official animal) at the market cross …

… to banks that look like palaces (this is the Royal Bank of Scotland).

It’s a city that made me want to look up (probably because the buildings are short enough that you can actually see their tops).

Edinburgh does offer new sights as well (you should’ve heard our tour guide bemoaning the architecture of the new Scottish Parliament building).  A group of us went to see an excellent — and very contemporary — performance of The Curious Incident of the Dog in the Nighttime at The Festival Theatre.  We also made a stop in the cafe where J.K. Rowling sketched out many drafts of the Harry Potter books:

And I’m happy to report that the food in Edinburgh has improved significantly since 1991, when the sight of a baked potato shop brought me tremendous joy after weeks of meat and more meat.  That shop is still there, thankfully, just a few blocks from the train station, but it’s been joined by restaurants from a wide variety of cuisines.  We had a delicious meal at The Outsider, a restaurant with excellent food (and a diffident waitress, which was unusual for Scotland).

Overall, Edinburgh did not appeal to me as much as I had expected it might.  It felt a little too brown and grey, a little too warren-like.  I appreciated the wide-open spaces just outside of town, and it was amazing to be in a city with so much history, but I didn’t find myself falling in love.