Another Park School of Baltimore graduate has moved to Singapore!  Anna Kleinsasser, Park class of 2009, has relocated here to join Everett in a great Southeast Asia adventure.  Soon we may have enough people to start a Baltimore Club of Singapore (they have all sorts of other clubs here for expats, so why not?).

Anna, Everett, Prescott and I joined forces this Sunday to explore the Design Trail component of Singapore Design Week.  The word “trail” is used loosely here to mean “small bus that will drive you short distances to different locations where design-related things are happening.  We abandoned the bus after our first stop in favor of creating our own walking tour.

We began our part of the trail at Telok Ayer Park, a tiny city park just a few blocks away from Everett and Anna’s apartment downtown.  A design team had created multiple installations in the park in an attempt at Placemaking, which is a theory of creating people-centered public spaces. They had little origami rabbits hidden here and there (you could make your own and add them to the scenery)… 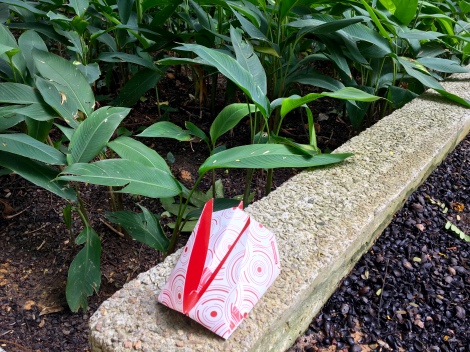 … and thinking spots on the sidewalk…

… and a place where you could stand and pop balloons (that was the biggest hit for our crew).  They also set out random crates — maybe for sitting, maybe just as ballast — holding larger balloons that you were not allowed to pop.

We sat and listened briefly to a talk on placemaking, but we soon abandoned our chairs in favor of going to a tour at the local Airbnb headquarters.  Airbnb has a very well-designed, fancy set of offices that they showed off to a full house (they also fed us cupcakes, offered us nonstop beverages, and gave us free shoelaces in a pretty good marketing blitz).  The best part of the Airbnb offices are their meeting spaces, each of which is inspired by an Airbnb rental place somewhere in the region.  Here’s a room that based on an apartment in Australia:

And this was my favorite meeting room — it has a secret door that’s part of a built-in bookcase:

Our final stop was the Oasia hotel, which has greenery growing up huge swaths of its face:

They were offering a talk on fabric waste and recycling, which started at a huge pile of discarded clothing … 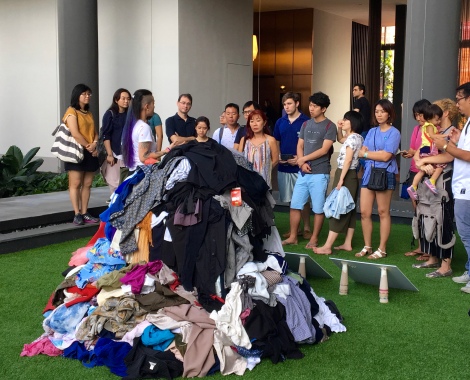 … and ended at a display of products made out of upcycled polyester and cotton (those knitting needs are each over two feet long): 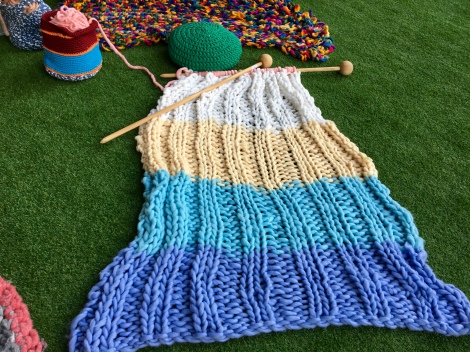 After a quick tour of Everett and Anna’s apartment, we had dinner at Kok Sen, a restaurant with zero ambiance (we sat on plastic benches on the sidewalk) that’s always completely packed.

They’re best known for their prawn hor fun, which we supplemented with several other delicious dishes.  The restaurant is on Keong Saik Road, a popular eating street with many beautiful shophouses:

One of those shophouses is home to this group:

I’m not at all sure what this organization does, but a quick and very incomplete Google search would suggest that there are other moral associations scattered around the world.  One is in the US — I hope they’re working overtime these days.